Pink Floyd - Dark Side of the Moon

I’m watching “The Making of Dark Side of the Moon” movie on Amazon Prime (may be available elsewhere). What an amazing piece of art that spans time. It was on the charts for something like 14 years.

Post any thoughts about the album, memories it inspires, or other Pink Floyd things here. 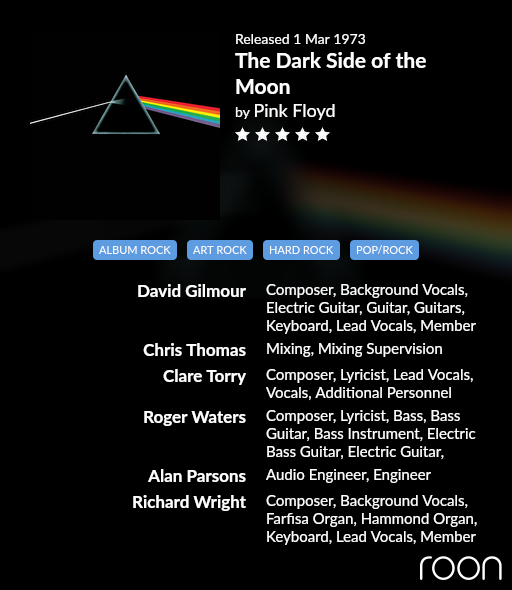 I do not know how many copies I have purchased since 1973 in so many formats. Just before “Money,” you hear the music “sag” because the open reel tape was bumped.

Imagine making an album that would support you for the rest of your life.

I was certainly drunk at the time.

memories it inspires, or other Pink Floyd things

In 1975 or 1976 I played violin on an English-German youth orchestra in Cambridge, UK. That year an additional viola player was needed, and so it came that David Gilmour’s viola playing mother came on board and I made her acquaintance. She was a kind and lovely elderly lady of 60 then. Now she is still kind and lovely and 105 years old.

Every time I listen to a Pink Floyd album I remember her.

Must be a wonderful and remarkable memory.

There are 4.0 quadrophonic versions and 5.1 versions around that I would like Roon to make playable on multiroom setups that are like in my case multiple speakers physically in one room but set up as multiroom. Some flexibility from Roon there would be appreciated. How can we play quadrophonic recordings when there is only a AVR 5.1 endpoint able to play more than stereo. Systems put together from different brands will always suffer.

I would think 4.0/5.1/Atmos, if ever playable by Roon, would be through Grouped Zones. But it is hard to see how Roon would make it work with varied different end points.

I am able to play multichannel FLAC files through my NUC HDMI output. I have it input into an Oppo UDP-205 and finally into a Marantz AVR 7.1 channel analog inputs.

For Hi-Res stereo I use the same setup but the USB DAC input on the Oppo.

I’m about 18. John Kenyon’s party, the early hours of the morning. I’m sobering up now, chilling, just reflecting. Lying on the floor, underneath the speaker, listening to DSOTM on the Dual 505 / NAD3020 / Allison 6 system. The moment is burned into my psyche, probably clearer now than it was at the time.

I have some similar memories… that are not so clear at all!

Ah yes those memories DSOTM in the early hours of the morning in my dorm room on a Rega Planar 2, NAD 3020, and Celef loudspeakers. Those were the days………

A piece of music history, which is also not to be excluded from my music and soul life. This one is as sad at that time as the reason of Rodger Waters to create this music.

Wiki and other sites give enough hints.

The fact that my father was killed in an accident in the year of its release also influenced my mood and enjoyment of music. Lying in bed with headphones and intense perception of all nuances, this album belonged to my daily youth rituals to cope with the new reality.

And even decades later, I continue to listen to it. My 1st choice is now The Wall. I’m sure that’s because by the end of the 70’s I had created this very wall into my petrified state. 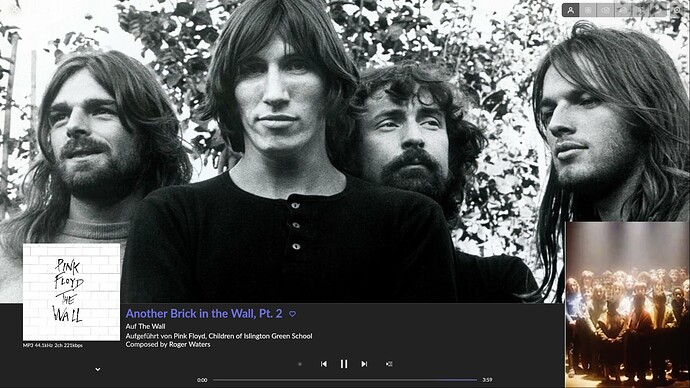 Actually, we should not stream Pink Floyd and other well-known artists and also not buy multiple times over and over again in other formats, but we are subject to exactly these laws of power, money and time (which I never have enough) and about the new rulers in Kabul I do not want to talk. Rodger Waters probably also had a war trauma.

Let’s overcome it with good music and think of your neighbor, even if you think you can’t afford it. Our singing children are the future. I hope you do not feel marginalized here

Has anyone tried the sync with ‘The Wizard of Oz’? Or was that just an urban myth?

I wonder what they have planned for its 50th anniversary in March 2023! I bet whatever it is will push it well over 1000 weeks on the chart.

So if you give ‘em a quick short, sharp shock, they don’t do it again, dig it…

DSOTM was arguably Pink Floyd’s finest hour; epic, without feeling pretentious. It must have been a difficult album to follow, but I think they did a pretty good job with Wish You Were Here; another great release. After that, I am not so sure; Animals was so-so, and I am not a fan of The Wall. I know this album has its admirers, but to me it’s a ‘curate’s egg’ (good in parts). Overall, it feels a bit overblown and histrionic.

I remember the anticipation that preceded the release of Wish You Were Here after the success of DSOTM. In the UK, WYWH was heard for the first time on Alan Freeman’s Saturday afternoon BBC slot. He played it in its entirety without a break and I remember using my portable cassette recorder to record the album off the radio (using a microphone against the radio speaker!).

I agree with your short takes on the albums. A masterpiece is hard to follow. The Wall was a bit over the top, but some tracks that resonated… and resonate to this day!

WYWH was heard for the first time on Alan Freeman’s Saturday afternoon BBC slot. He played it in its entirety without a break and I remember using my portable cassette recorder to record the album off the radio (using a microphone against the radio speaker!).

I remember those days! Saturday afternoons were just amazing. I had a friend with a Philips cassette recorder with a DIN socket, so he could record radio without hoping no-one would come into the room and spoil it…that was Hifi

FWIW, I think ‘Animals’ is the most underrated Floyd album, lost in the shadows of what came before and after. Looking forward to the reissue, hopefully this autumn, if Gilmour and Waters can get on.

Actually on consideration, I agree, Animals deserves a bit more praise that ‘so-so’, although I much prefer ‘Dogs’ over the other two long tracks. Apparently, the story goes that the individual band members writing royalties were paid per track, so Roger Waters split ‘Pigs on the Wing’ into two parts, thereby increasing his cut!

I had a blind and somewhat manic-depressive American friend in the USA who had spent her “wild” years in the UK, where I live, at just the right time. She knew the lyrics to this album off by heart and injected them into her conversation all the time, puzzling everyone around her back in Cincinnati. I went from being just a mere acquaintance to being a very close friend simply by being able to respond in kind and understanding where she was coming from. For my friend there was no dark side of the Moon: it was all dark. Sound familiar? The themes of the album encapsulated her frustrated life.

Meddle is my favourite Floyd album. Headphones and some “paraphernalia” and I’m all set.

Will look for this documentary tho’. Thanks for the heads up!

The SACD is both stereo, and M/C is sublime.