Thanks for making this thread. KEXP in Seattle plays sponsorship messages, which the rest of us call ads. They’re relatively low volume (2-3/hour) and short, but it’s nowhere near ad-free.

Thank you. I’ve changed the description.

4 posts were split to a new topic: Live Radio stations not playing

Nearly every day for the past couple years I have been listening to the Live Radio morning show via Roon on WSB in Atlanta. Today when I selected WSB, a notice flashed briefly, I hit play again and got audio. Later, when I tried playing WSB in another zone I got this notice, “Playback was interrupted because a track failed to load” , no audio. I can play other live radio stations. I attempted WSB several times on other Roon zones later in the day with the same notice and no audio.

Just for the heck of it I tried WSB on an Amazon Echo and the station played fine.

So, what is the issue with my WSB radio station and Roon live radio?

Curious, this is the same notice that thread starter, Nick Brown, saw only two days ago, The difference in my case is it appears to be just one station is affected. Did WSB change something or is there an issue with Roon Live Radio?

Hi @John_Eaton, I’ve moved your post here as it sounds at the moment like a particular station stream problem. If it is more then we’ll start a new thread in #support as we don’t want two issues in one support thread.

Getting back to your problem, I don’t believe we have WSB in our live Radio database, so I assume you are using a stream of your own in my live Radio. Can you tell me what it is?
In the meantime I have searched and found

http://oom-cmg.streamguys1.com/atl750/atl750-iheart.aac
Which works if I try it in Roon. 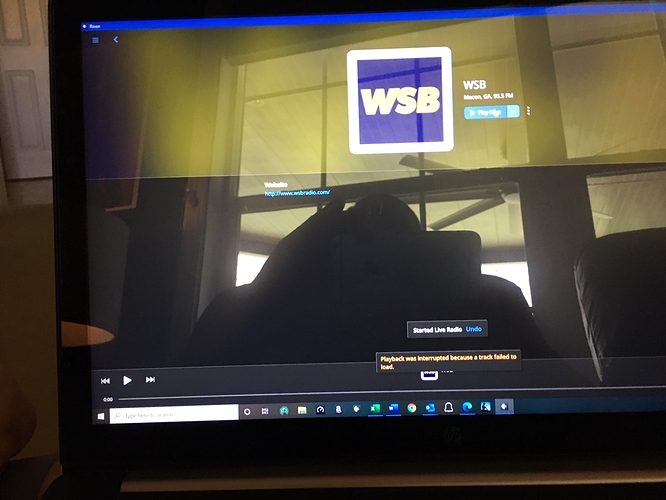 IMG_18892016×1512 669 KB
Hi Brian, thanks for the reply! I honestly don’t know if WSB was in your Live Radio Data base and is there no longer or what. I don’t recall how I found or if I created it a couple of years ago and am not familiar with negotiating the Live Radio data base as all I ever tuned to when not playing music via Tidal or saved files was WSB. It was my default station when I selected Live Radio.

So, as you can see from the photos, WSB and their logo still show up on my Roon PC remote but still does not play. Curiously I can no longer find WSB radio on my iPhone. Another curiosity when I look at local radio stations and attempt to play GA Public Radio, I get the message “its address may have changed…” Interestingly I can play BBC World Service, The Fan in NY, pretty much everything else.

Let me try to figure out how to plug in the WSB link you provided. If I can do that, I’ll be good to go.

Thanks again Brian, will let you know.

Add a name etc and off you go.

In the meantime, I’ll add the station to the main database.

I’ve added WSB Radio
Use the magnifying glass to search and it should be near the bottom of the results.
Please check if OK. You can then add the station to your library and it will appear in my live radio

Regarding GA public radio. Something funny is going on there; I have VPN’d to the US but the station refuses to play.
For the time being I have added a third stream which does work.
Can you check please?

Hello Brian, Yes and yes! WSB and Georgia Public Radio with appropriate logos, along with all the Local Stations play just fine.
You guys really set the standard for help and service.
Once again, its Roon to the rescue!
Thanks a bunch Brian.
John

Europa Jazz HD has stopped playing for me. The embedded stream here plays, but it no longer works in roon:

You’re right, it won’t play in Roon. The Tunein link won’t work either.

Looking at the low level replies I suspect they have recently upgraded their stream and Roon currently won’t play it. I will explore further and raise it with the Roon devs.

Thanks for the tip off and sorry for the time being.

PS I assume this was one of your My Live Radio stations as it isn’t in our database.

correct, my live radio, and i was surprised it’s not in Roon, since i first discovered it in the great radio station thread.

thanks for checking into it.

I’ll add it when we find a working stream - don’t let me forget!

BellyUp4Blues seems to be “broken…”. Can you take a look? Thanks! 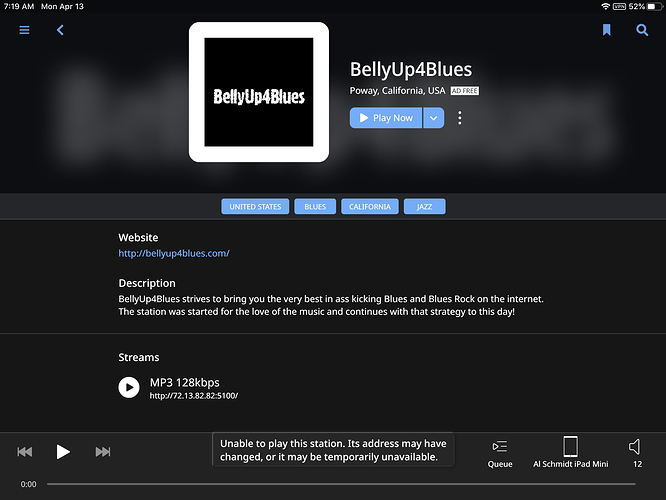 Sorry and thanks for letting us know.

Wyoming Public Radio station in Laramie, Wyoming has intermittent drop-out issues which will give the error message "the URL may have changed… I had some Roon Core issues that Norris helped me correct. This seems to be the only station with this problem. They do have a very high quality stream of AAC258, so I wonder if that is part of the problem. This station is listed as part of the Roon internet stations available. I don’t know how many Roon listeners use this station. They have a good morning music program and a very high quality stream. Thanks.
Mike Gormley

Sorry for the delay - Roon radio was down…

I was able to listen OK, but maybe I didn’t listen long enough. Do you get problems with the lower quality streams? If certainly does sound like a problem with your setup.

I don’t know how many Roon listeners use this station

At this quality, not many - Roon or otherwise! From their server: 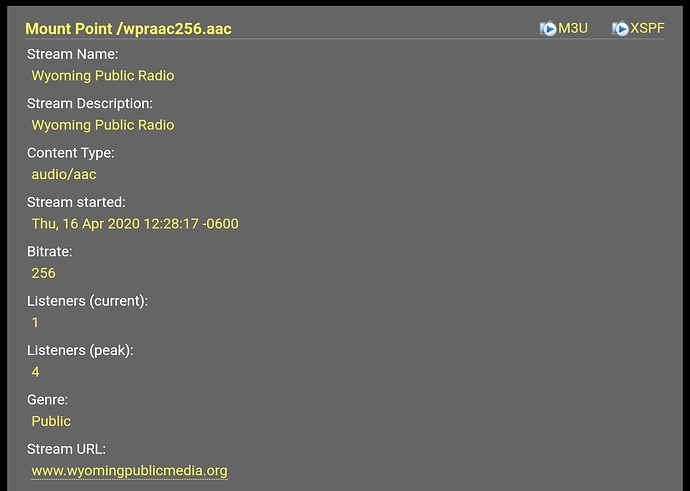 BTW, their own website does not refer to, or use, this stream.

Brian,
When the station drops out it doesn’t matter which quality stream I use (tried the lower quality stream). Found some information on their website that they have had dropouts and disconnects and contracted with a new streaming company. They reported new streaming equipment up and running on 4/10/2020. Maybe still a few bugs. Will contact them. Will let you know. Thanks. Since this is the only station, probably not a Roon problem or problem with my core or internet service.

Ok, thank you for the info. I had noticed that some streams came from a different server. Both seemed active when I tried them, but just in case, I’ll add extra streams from the new server. Unfortunately for you, that doesn’t have any high quality aac streams.