This Tidal album has merged Daniel and Martha into one artist. Please can they be separated? Not possible to merge artists when Roon has no meta-data for one of them?
Problem with Artist view
Ronnie (Ronnie) February 11, 2017, 12:40pm #2

Then I would delete or untick the merged name above

Please can they be separated

Simple answer: No, not yet; but it is something that we want to do.

Thanks for the suggestion Ronnie. It works, but needs the addition of separate Album Artist entries as well. 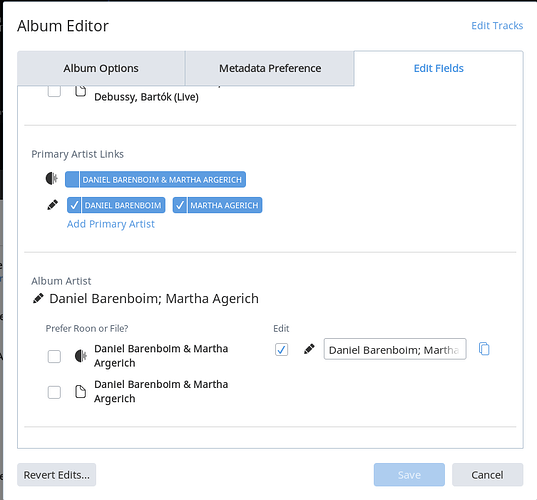 Yes sorry, I forgot to mention the 2nd step

Out of curiosity, does the result give you what you need in terms of display…and linking etc??

Yup, seems to… thanks.

Won’t the steps proposed above work??

Yes. I was referring to separation in the Roon metadata service.