There’s talk on this forum that ROCK will soon be modified to have Roon support on NUC 11 & 12 platforms.

I just bought my NUC 10i7 because:

What advantages / disadvantages should one anticipate with a NUC 11 / 12 and a compatible version of ROCK? Would any of those advantages justify an upgrade of a NUC 10 to an 11 or 12?

And finally, should I wish to “tweak” the performance of my NUC10i7fnh, can you recommend the best of the (many) applicable threads on that topic?

It has already been modified with this update:

Hi Everyone, It’s been a while since we’ve issued an update for RoonOS and we have a major change along with some minor fixes which do need to be released. The largest change in this build is support for booting via UEFI which is especially important as Intel phases out NUCs with legacy boot options. Taking this release as an update will not change your device to UEFI boot or require any other intervention. This change will only apply to new installations. There is no practical (or audible) r…

NUC11 models have been added to the officially supported list, some NUC12s are on the way and will be added when tested: 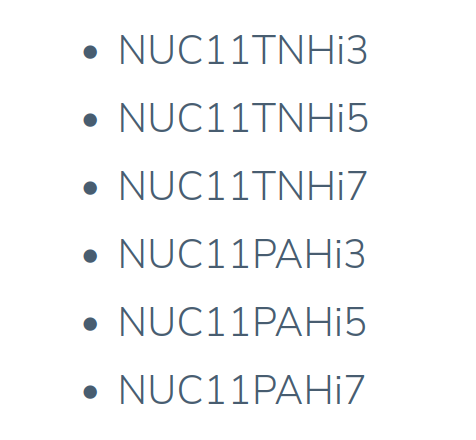 (Note: one model that is not on the list is not working according to a forum thread, so choose wisely)

If your NUC10 i7 does what you need, there is no reason to change. I have a NUC 10 i5 and with one audio zone and no DSP except volume leveling the signal path tells me that processing speed is x100 (a bit over x1 is necessary), so lots of headroom. And the remotes are fast as well. The idle power usage of the NUC10 is low, another advantage.

NUC11 and NUC12 will probably be faster than NUC10 and their power consumption will differ (most likely lower comparing like for like, but depending on specific models can be higher as well). The 11 has a better GPU, 2.5 GBit networking, and new M.2 interface compared to the 10, but you don’t need either, and obviously a new CPU architecture (faster, less power). There are lots of NUC and CPU comparison websites out there for details. However, if your NUC is far from being taxed, like mine, a faster one will not change much.

Same goes for tweaking yours. There are some options in the BIOS settings, but I don’t remember if they are at max by default and your only option is reducing them, or if you can increase them. If it’s fast enough, reducing options may make sense to save power. E.g., turning off additional cores that Roon is not using anyway.

IMHO, your 10i7 is a great platform. If you are not experiencing problems, forget about it and enjoy the music. (That’s probably why you have ROCK

I’m new to my NUC and ROCK. I’ve used them so far for only an hour or two. I don’t expect to tax the hardware because:

I have only one zone
I have only one 6-TB library drive
I’ll have only one streamer (when it comes in) for the NUC to feed
I rotate equipment in and out of the system routinely, but it shouldn’t affect the NUC/ROCK

Given my setup, unless there are significant (and pertinent to me) advantages from the NUC-11 / 12, I don’t think I’ll bother moving in that direction.