Are there plans to add other Presets in the DSP Engine similar to what Audeze now has? I’d love to have DSP presets for my home speakers.

Seems to me that other presets like the Audeze ones would be limited to other headphone brands, since optimizing speakers would require room correction.

(Kudos to the Roon and Audeze teams for this partnership. I think it’s a great idea that will benefit the two companies and their mutual customers.)

I’m imagining something like what Linn does with their Space optimization. Input your room size and have the speaker characteristics already preset. Something like this. Just thoughts

I heard these were coming from the Audeze guys at the LA Audio Show. Very happy to see them released.

@danny - Noticed a bug with the icons (which is a very nice touch btw). I enabled the preset for the iSine 20s which switched to their icon but upon disabling both the DSP Engine and the Audeze Presets the icon remains. Any way to have the icon for the dependent on having the Audeze Preset enabled, rather than one of the models selected?

Click the preset again and it will deselect + remove the artwork.

Thanks @brian. I was able to get it fixed.

For context i use my isine 20s as work with a dac/amp with RCA outputs to a pair of powered speakers. With the isine’s i was previously using the EQ settings Audeze provided on headfi. When listening to the powered speakers I don’t have any DSP enabled.

The reason why i suggested having the icon toggle on the enable/disable for the Audeze presets rather than clicking on the model is that its fewer clicks so that if i disable all DSP or just the Audeze presets to listen to the speakers the icon goes away. Right now I’d have to open the dsp, select Audeze scoll down click the model and then disable the presets and DSP.

If you tied which Audeze icon to show to the preset as it is now, but also added a check for whether or not to display it based upon the preset switch being enabled its just a couple of less clicks for me to have the “right” icon display for each situation. Disabling DSP which would subsequently disable the Audeze presets and could thenswitch the icon back the generic speaker. Enabling it again would switch it back saving me from having to go and select the preset again. Basically two clicks to get to the dsp screen and switch on/off versus a couple of extra steps as it is now.

Admittedly its nitpicky but i think adds a nice touch.

If you tied which Audeze icon to show to the preset as it is now, but also added a check for whether or not to display it based upon the preset switch being enabled its just a couple of less clicks for me to have the “right” icon display for each situation.

It’s valid (and good) to allow people to have the icon without the preset if that’s the way they prefer to listen to the gear. Branding in our product is all about the gear you’re using.

Headphones are a funny case…because we have no means to auto-detect the gear. So we are using the selection of a preset as the cue to trigger the branding.

I have a similar use case/issue in my office…many sets of headphones with different DSP settings. I solve it by making diff DSP presets in Roon for different gear/dsp permutations. On the non-Audeze ones, I remove the Audeze Presets item from DSP Engine entirely so the icon gives me a clue as to when it’s “wrong”. 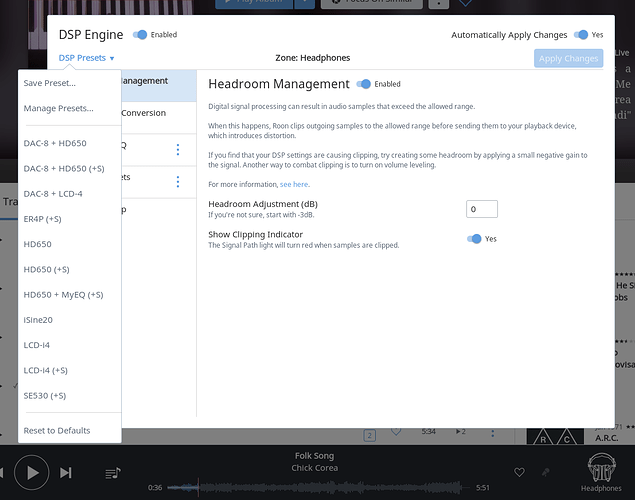 We plan to make DSP presets easier to access in the future. Right now it is a little bit clunky…but it still works OK.

Creating two presets 1 for the Audeze and 2 one with every disabled then switching between those two seems to work. Didn’t think to do that. Thank you for the suggestion.

A way to choose a preset from the overflow button on the zones screen might be a potential way to make it less clunky.

I’m imagining something like what Linn does with their Space optimization. Input your room size and have the speaker characteristics already preset. Something like this. Just thoughts

I’m all for making room correction in Roon more user friendly. Not sure how feasible this is, but to me, the current convolution arrangements don’t seem very “Roon-like.” Glad they’re there, though — it’s a step in the right direction.

Agreed. Anything that makes it easier would be great. Figured I mention it here as it’s a “Feature request”. Likely its very complicated and probably not the best ROI for the Roon team. However one can ask!

Hi, are there any plans to add presets for other headphones? I vote for the Sennheiser HD800S! Thank you!