Primary Artist not listed as Performer

maybe you can help me understand/solve the following issue. The Primary Artist for the album mentioned below is Sol Gabetta. The Ensemble is Sonatori de la Gioiosa Marca. The first sentence on top of the track listing is - as far as I understand - created by information available in the database. At the end of the sentence only the ensemble is mentioned as performer. Why is the Primary artist not shown as Performer ? As you can see on the second screenshot Sol Gabetta has Credits (on album level) for Performer and Cello. None of these credits changes the wording of the “All tracks performed…” sentence. 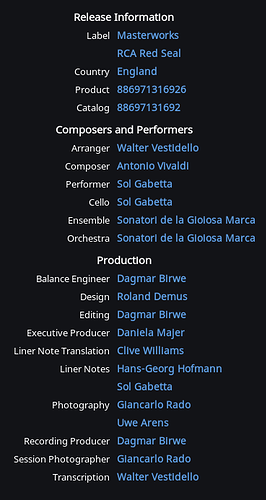 Any ideas or suggestions ?

I find this “feature” of roon hugely annoying as well. For some reason roon will display “duplicates” of some “roles” of primary artists at both the album and the track level on this album screen. These include conductors, orchestras and vocal ensembles. It’s possible there are a few others. I don’t know.

However, there are many scenarios where you want other “roles” visible at both an album and a track level. For example, there may be quite a mixture of works on an album, lot’s of different soloists and guest artists and mixes of forms, and it is not obvious who is playing what. This is extremely common in classical. E.g. opera, lieder, quintets, sextets, septets, octets, cantatas, scared music, concertos, etc. etc.

Classical music doesn’t matter that much. Hence the “haphazard” presentation.

I think you need to add the ensemble as a primary album artist. That will put it up top.

Ah. Good tip. I didn’t know that but what to do for a soloist rather than an ensemble? Normally if I want the performer “up top” I make it an album artist in my files and and add primary artist link in roon.

But mostly I find the problem the other way round. How to get an artist visible as a track level artist when there is already an album level link “up top”. By default roon will not show the artist at a track level when there is already an album link probably because it considers that a “duplicate”. Personally, I don’t mind the duplication and the roon default creates a worse problem in that in many scenarios you will not know who is playing what at a track level.

Thanks to all for replying. It seems that I am not able to get the desired result for now. I’ve added the Ensemble as Primary Artist but it doesn’t show up in the sentence mentioned above.