@support there is an issue with mixed DSD & PCM playlists being sent to HQPlayer. @jussi_laako has confirmed it.

Can you give a step by step on what produces this behaviour? Would like to see if I can reproduce it, but not clear what kind of mix we’re talking about.

Is it auto where pcm stays pcm and dsd -> dsd? Or is everything being upsampled to DSD? Native or DoP? I know multiple people have mentioned this on CA but CA is offline. Just curious if there are some shared parameters here.

Auto for me. Dsd pass through. Pcm is up converted to pcm.

Hi, @DrTone, thanks for the report! We are trying to reproduce the issue.

I’m one of the people reporting this problem over on CA. My situation is 100% reproducible. I create a 4 track playlist with alternating dsd and pcm tracks (any set of tracks in my collection) and the dsd tracks halt at the end of that track, as though “stuck” on the last second. If I press “next track,” it happily moves on to the pcm track. Otherwise, it just sits there indefinitely. This does not happen at the end of the pcm tracks. They move on to the next track (whether dsd or pcm) normally.
This only happens while playing through HQPlayer. If I bypass HQP and play straight to the usb, with no other changes, it works fine. Likewise, I can upsample using Roon’s built-in sample rate conversion and it works fine.
I’m using an SGM2015 server with the latest version of Roon and HQPlayer running on the SGM, but the problem has been evident ever since I first began introducing dsd tracks to my Roon library, so that’s at least a couple of versions of Roon back.
The dac is an Aqua Formula, so it only accepts pcm. Hence I’m upsampling and converting, where necessary, in HQPlayer to 354/384 pcm (using x2 auto).
Let me know if you’d like any additional information and/or tests.
Thanks,
Jerry

Hi, @jpowell, thanks for your report, that’s a useful piece of advice to keep in mind.

@Ivan I assume the playback progress indicator staying stuck at the end of the last track of an album played to HQPlayer, might somehow be related?

Notice the times as the album has finished. This alway happens to me. 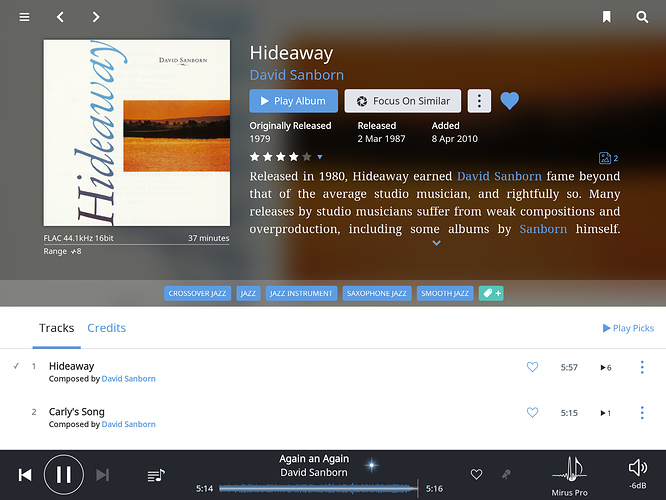 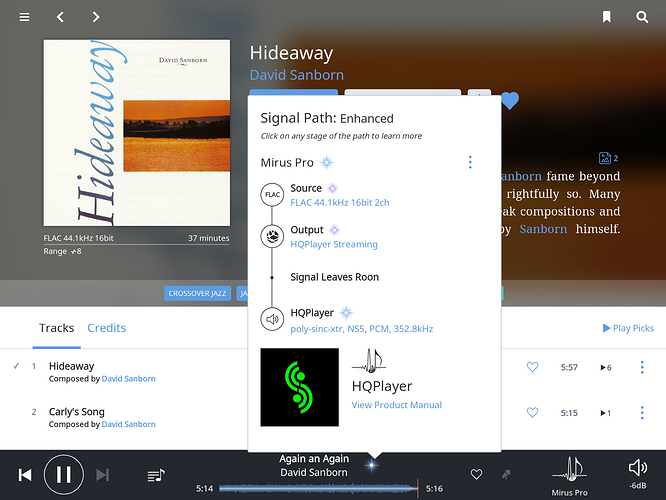 Hi, @DrTone, @jpowell, thanks for your feedback, we reproduced the issue, trying to fix this one now, ticket in. I’ll let you know how it goes.

Thanks @DrTone for the report, I thought I’m alone before, just too lazy to report.

@Ivan do we have an update on this one?

I’m having PCM files stop with with 1 or 2 seconds left - on a random basis. Sometimes every 10 minutes - sometimes every 3 hours. It doesn’t seem to be related to different sample rates. (I’m not playing any DSD files). This occurs playing HQP thru ROON. I have a sense HQP feels this is a ROON issue. Is ROON working on this?

@DrTone / @jpowell / @Paul_Kwan / @DJD ----- Thank you all for your patience while we have been investigating this behavior.

To bring all of you up to speed. We currently have a fix for this issue that is being tested in our QA lab, and we are hoping to include it in the next release

That’s great news, Eric. If you need any more beta testers for the fix, just let me know, since I’m still a 100% repeatable instance of the problem (even with HQPlayer 3.18 and latest Roon release) :).
Jerry

Just to confirm with my own set of test tracks, I can vouch for the bug fix working fine in my setup (with build 269). Hallelujah! Thanks, Eric.