I’m having some issues getting an active speaker project I’m working on to work with Roon and I’m hoping someone who has played with Roon’s DSP features can help.

Running Roon 1.3 via USB ASIO connection to a Focusrite Scarlett 18i20 Audio Interface under Windows 7 Ultimate 64bit on a MacBook Pro running Bootcamp. My RAAT server exists on a separate Mac Mini.

I have the Focusrite set up to accept DAW (Digital Audio Workstation) inputs on channels 1,2,3,4 and output to same respective analog channels and then to my amp. In Roon it appears channel 3 is listed as Center Channel and channel 4 as LFE and as such, in Roon’s Procedural DSP using “Mix” I’ve mapped the left and right channels to these outputs (as well as the standard Left to Left/Right to Right) and then through two EQ blocks to provide crossover and EQ functionality (see screenshot below). Doing this gets me output to my bass speakers (channels 1 &2) but no sound on channels 3 & 4 (my mid-tweet speakers). I may not have explained this as clearly as can be but the screenshots below should help…

Incandescently, when doing a sound check via Windows control (Sound) panel I get output as desired from the channel mapping listed above. I also get the same result using Roon set up in the same manner in OSX but again do get sound through the correct speakers with testing in OSX’s 'Utilities–>MIDI Setup. 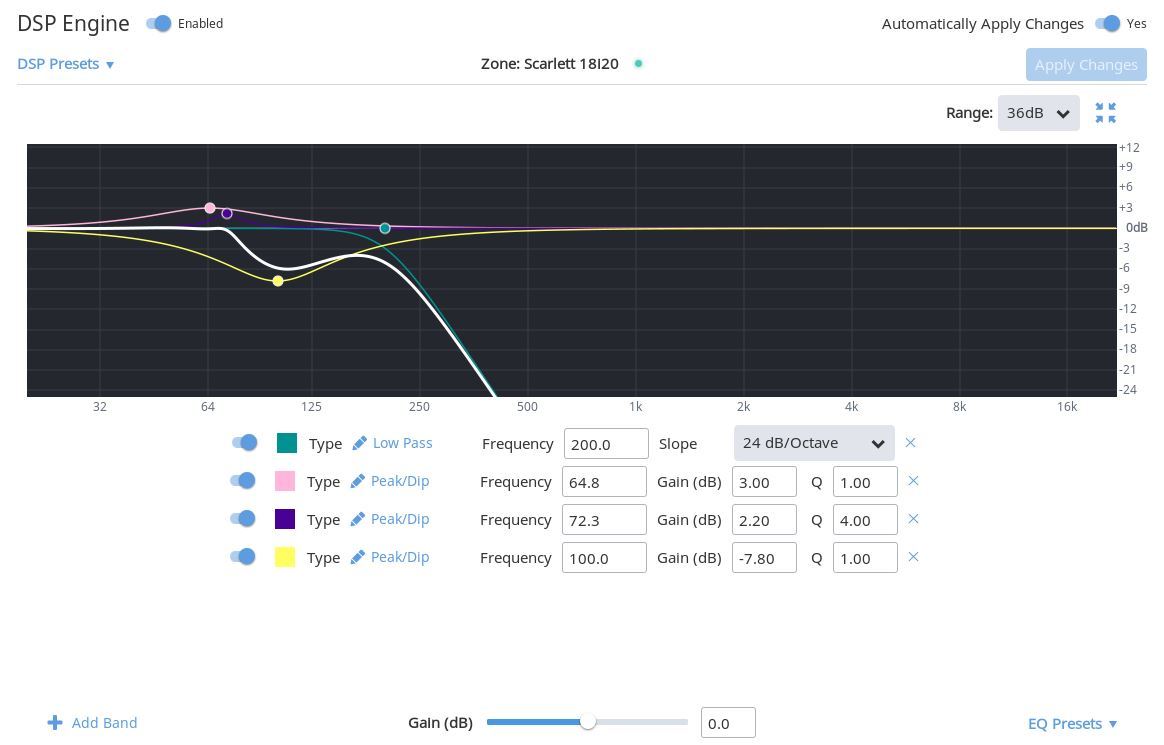 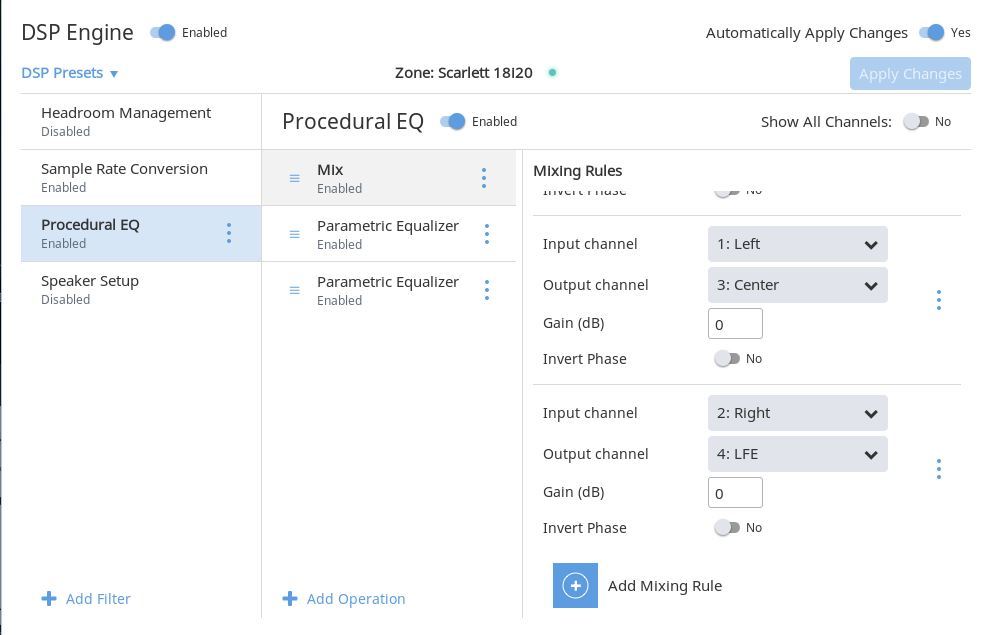 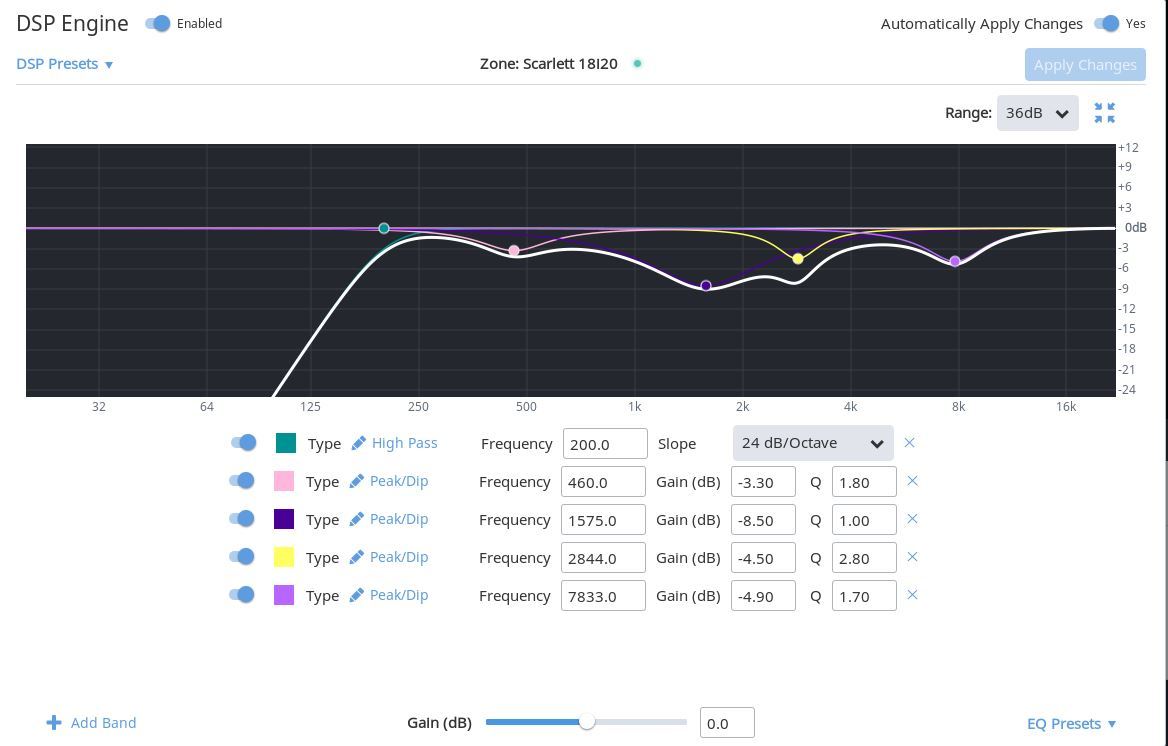 My goal, once this is working, is to loop back and follow Mitch Barnett’s book Accurate Sound Reproduction Using DSP to do all this with convolution filters. In the mean time, I’d like to get this working so I can compare in the end (and listen to some music!).

I’ve shifted your post to Tinkering for the moment as I suspect that is the audience that can assist most quickly. I’ll also flag @brian as he may have some suggestions about the best tools in the box for active crossovers.

I have to confess to not knowing a great deal about Procedural EQ or channel mapping, but this statement seems to be the point of departure between Roon and the non-Roon experiences. Can you expand on how you know the above ?

Any chance you don’t have a multichannel layout selected in Device Setup? 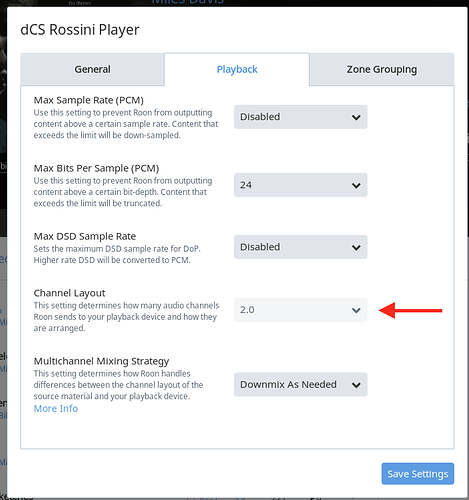 This should be set to 5.1 or 7.1 if you are doing an active xo like this, otherwise Roon will only output 2 channels.

If that’s not the issue, I suggest simplifying the configuration slightly just for the sake of troubleshooting. Just try to use Mix to send the left channel to all four channels with no EQ first and make sure sound is making it everywhere it’s supposed to. Then add elements like your EQ’s one at a time and see if you can work out where it’s going wrong.

I checked and I have it set to 5.1 and Roon sees all the channels if I select “Show All Channels”. I also did as you suggested and simplified my setup to no avail. Curiously, I went back to Control Panel–>Sound and looked and now it shows only 2 channel capability on the Focusrite. Does this mean that under WASAPI I get 2 channels but under ASIO I get them all? Further, Focusrite Control (the application provided by Focusrite to set the mixing rules for the device) now says “No Hardware Connected” when I open it so I may have other issues not related to Roon’s setup. Any ideas what’s going on?

Does this mean that under WASAPI I get 2 channels but under ASIO I get them all?

This is not uncommon.

Try using the 7.1 layout instead–some devices like it better.

Not sure about the driver thing, but if you are getting any audio through the device it is probably not the cause of the issue.

I still think that simplification test is a good idea.

It would appear that my Focusrite is not compatible with a Mac that runs Bootcamp. I can’t for the life of me figure out why something wouldn’t be compatible due to having a boot loader installed??? It would appear that this isn’t unique to Focusrite but several other pro-audio interfaces as well so make sure you do your research before going down this path if you run Bootcamp and want to run pro-audio stuff…

So after all this time I have re-arranged things so that my Scarlett is being fed from a Mac Mini and Focusrite Control works finally!

The only issue I have left is that the channels map incorrectly in Roon as far as I can tell. Has anyone else ran into this? The channels seem to map properly in OS X’s MIDI setup which is why I think this is a Roon issue. Specifically it looks like the parametric Eq is where things get mixed up… if I apply eq to the same channels I defined in “Mix” (see my earlier post for how I have this set up) I don’t get any output on Channel 4: LFE but if I turn on Channel 7: Surround Left I get correct output. Same thing happens to another EQ block that I added for a subwoofer. I told Roon in “Mix” to send both the left and right channels out through Channel 5: Back Left and yet I don’t get any output on that channel but instead have to turn on Channel 8: Surround Right to get output in my Parametric EQ block for that channel.