I would like Roon to be able to put each zone into standby after a specified time of inactivity.

I just discovered that my (active) speakers genuinely make less heat when in standby. I had assumed that they heat up the room the same when switched on at the mains, regardless of standby or not. But I discovered this isn’t true. So now with temperatures hitting 38C where I am, this is relevant to the temperature in my house.

Of course this feature would be environmentally and wallet friendly too, which is possibly even more important.

Or a way to stop all other audio devices that are in a pause state or playing at once.

@Ludwig
Are you thinking of a combination with a remote control or smart power socket?

I use the Mi:home power sockets with a Logitech Hub and IFTTT ( https://ifttt.com) to turn on my speakers and Roon endpoint + take the speakers out of standby and select the correct input. Intergrating ROON with IFTTT could allow a reverse based on inactiviy.

Are you thinking of a combination with a remote control or smart power socket?

No, all the Roon Ready components I’ve ever had have had power off control through RAAT built in, as does the Meridian protocol. No need for anything other than a “small matter of programming”.

Thanks @Ludwig, this reminded me of something…

When I have an idea for an extension I create a directory and give it a name that describes the intended function. This way I park the idea and leave the coding for later. Some time back I looked at an empty roon-extension-zone-monitor directory and was wondering what the idea was (no the mechanism isn’t great 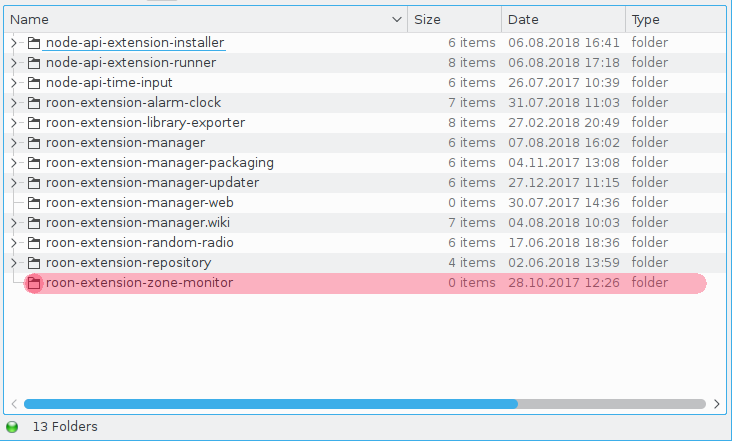 The extension monitors the different zones and if there is no playback for some time in a certain zone it switches that zone to standby. There is a one time setup to tell for which zones this has to be done, after that it is just running in the background. The Roon API provides all the necessary functionality to make this happen, only limitation is that not all endpoints support standby.

If an implementation via an extension would be of interest to anybody then let me know, I might have a look at it.

Personally I’d prefer it to be natively integrated. But it’s also appreciated if you want to make an extension!

I would definitely like to try this sort of thing if you are able to package it up for us.