I thought Qobuz doesn’t do MQA, however Roon reports this title:

In Qobuz it is listed as 24-bit/176.4kHz, however it actually plays two different ways, neither of them the way it is listed…

I’ve reported it to Qobuz, so who knows - they could have fixed this already.

I’d love for someone else to take a look at this and see what it displays as. Thanks!

Same to me: it is a MQA encoded file in Qobuz!!! 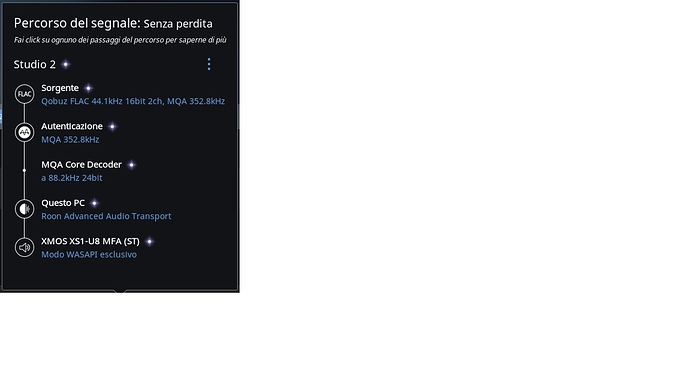 This has been discussed a while ago. Qobuz does not support MQA, but if a label only supplies the MQA stream to Qobuz, then you get the MQA stream from Qobuz.

Maybe this is the ‘thin end of the wedge’?
After all, if all the labels decide to supply MQA files for streaming in the future, then Qobuz would become, by default, an MQA-delivery service/vehicle, just like Tidal.
I’m not quite sure how I feel about such a prospect…?

I suppose my ‘head’ says that this may be the natural ‘evolution’ of the streaming market. But equally, I enjoy streaming Hi-Res from Qobuz.
A situation to ‘watch’, me thinks…

That isn’t the only file/recording. It looks like it may be just 2L at the moment? 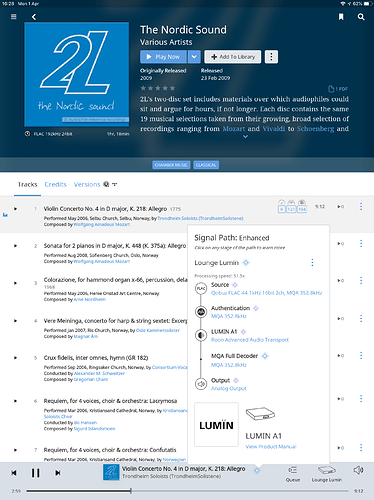 Yes, most (if not all) 2L albums on Qobuz are this way, which surprised Qobuz. When asked, 2L said it had been supplying such files in MQA CD to Quboz, MQA CD to Tidal Lossy/HiFi, but, that the true 24 bit MQA is available on Tidal Masters.

It’s slightly (!?) worrying that Qobuz weren’t aware of this themselves, and no mention is made of MQA on their website. Also worrying that Qobuz still label these files as 24/192 in their catalogue, when they are in fact MQA streams.
Could this be ‘MQA by stealth’?

And, there have been a couple of CDs released which were MQA only CDs but were not labeled as suc, which I found disturbing as well.

Whatever your outlook on MQA is, I expect any provider streaming or purchased product to identify the music source; such that I and other consumers can choose which they prefer.

Bloody good question!
The bigger question is, do we ever know with MQA…?

The signal path is clearly labled from what I see. That’s what you get with a decoder or just a first unfold.

I fail to see how an ‘unfolded’ 16/44.1 MQA file can be equated to a 352.8khz PCM file? I thought the sampling rate was just ‘doubled’ on unfolding, which would make it the equivalent of 88.2khz? Or am I missing something?

But anyway, considerations of how MQA actually ‘works’, and as I Qobuz subscriber, I am mildly annoyed by this discovery. It’s like buying a bottle of red wine, only to discover that it’s white wine that comes out of the bottle. NOT good!
I subscribe to Tidal too, and I expect the choice of MQA through their Masters.
Qobuz need to make this public, if only to ensure that subscribers do indeed get what they have paid for.

That’s how MQA works, the decoder will unfold to its max ability and that can be, and often is, 352.8.
It depends on the encoding used. So simple upsampleing, it isn’t…

Past 88.2 or 96 it certainly is upsampling there is no further data to unfold.

Clearly there are things to do that can require the higher sample rate used by 2L, or they wouldn’t do this. Something to research perhaps.

To be clearer Chris, this is from the ‘soundonsound’ website on MQA:

So it would appear that it’s the source material that dictates 352.8khz, rather than the maximum sampling rate ability of the decoding DAC. And yes, that wud explain the 44.1khz file ID in this case too.

Yes, the source material decides the full unfold. Some DACs can only unfold to 192 though.

Digital eXtreme Definition (DXD) is a digital audio format that originally was developed for editing high-resolution recordings recorded in DSD, the audio standard used on Super Audio CD (SACD). As the 1-bit DSD format used on SACD is not suitable for editing, alternative formats such as DXD or DSD-Wide must be used during the mastering stage. In contrast with DSD-Wide or DSD Pure which offers level, EQ, and crossfade edits at the DSD sample rate (64fs, 2.822 MHz), DXD is a PCM signal wit DXD w...

This would explain the 352.8khz origin.

I’m not saying the hardware MQA renderer isn’t producing the source sample rate when possible. As well I’m not saying that the upsampling doesn’t play part in the sound you like, I’ve heard the slight differences in different filtering techniques.

Second unfold is a much more marketable term vs upsampling. Similar to how they use deblur to describe the effect of mp filters which meridian has been using for years.