Qobuz 'Unavailable' Tracks - Some Are Identified, Some Are Not. Why?

When looking through playlists I have created, I will occasionally, and frustratingly, become aware that certain tracks I had included in a playlist are no longer available on Qobuz. Obviously a pain, because if you liked that track, and want to have it in said playlist, you then have to go and try and identify another version of that track in Qobuz and place it where the original had been in the playlist.

In Example 1 below, you can see that ‘Unavailable’ is clearly visible in red text above the track name. Easy to spot, easy to rectify. 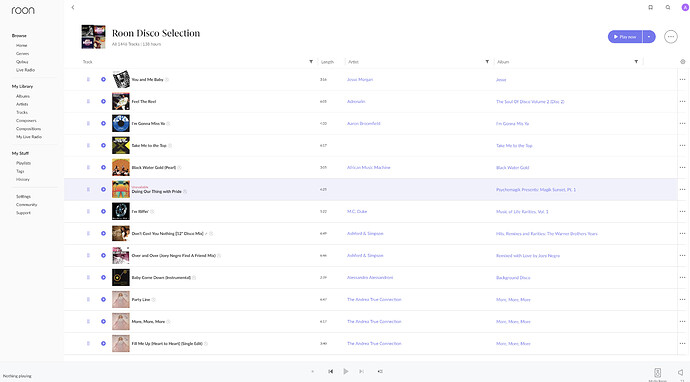 In Example 2 below, there is no red text above the track name, but the album artwork is greyed out. Not so easy to spot, but still a visible indicator of the track not being available. 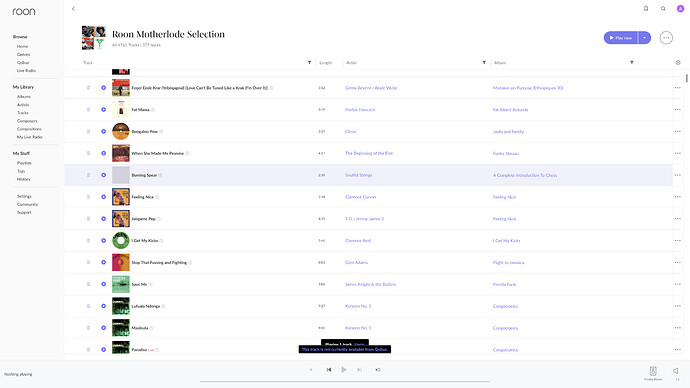 In Example 3 below, in this case the track Vortex by Yotam Avni, there is no visible indication that the track is not available on Qobuz, and you do not find this out until you attempt to play it, which is obviously really frustrating, because at the moment you would most like to hear the track, you find you cannot. 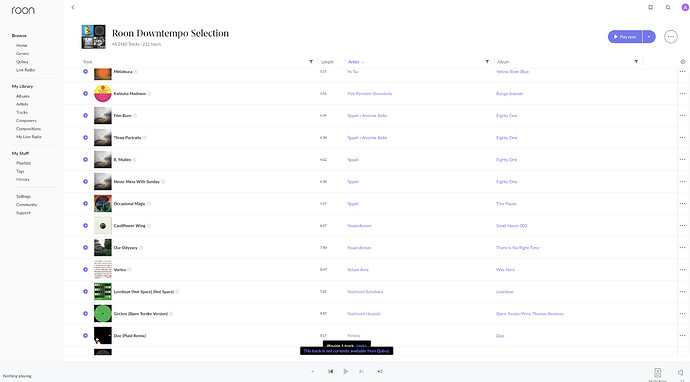 I seem to have many, many tracks in my playlists which fit into category 3 above, so I find that I becoming more and more frustrated at these ‘blind’ unavailable tracks. Can you tell me why there is this variation in the display (or not) of unavailable Qobuz tracks. Surely they should all be like Example 1?

I look forward to hearing from you.

Just thinking out loud: could it be tha tracks in example 1 are in your Roon Library (eventually via Album), and that tracks from example 3 are put in your playlist but not added to your Library?
I do not use Playlists a lot, so I can not test this myself in an easy way
Dirk

Thanks for your input. I only have iTunes tracks in my library, as far as I know. The tracks in my playlists are tracks that I have searched for in Qobuz using the Roon search facility, and which have then been saved into a playlist created in Roon.

From time to time licensing agreements on Qobuz change and an album/track no longer becomes available to play. In the Qobuz app the tracks are always greyed out, so you know which ones are no longer available.

I tend to use Roon for music playback, not Qobuz, so my issue is how that redundant track is then displayed in Roon, and I have shown the three ways it seems to happen. I would like to know why all the tracks in this category cannot be displayed as in Example 1 in my first post, ie with a nice bit of red text saying ‘unavailable’, which makes it very obvious which tracks are no longer accessible. I use Playlists a lot, and it is very frustrating to find lots of tracks like Example 3 above, because you then have playlists with hundreds or perhaps thousands of tracks in them, and you don’t know how many of them are ‘ghosts’ until you attempt to play one. It seriously impairs your enjoyment of your music collection.

The question still remains if these tracks are in your Library or not (and if this even matters!?). 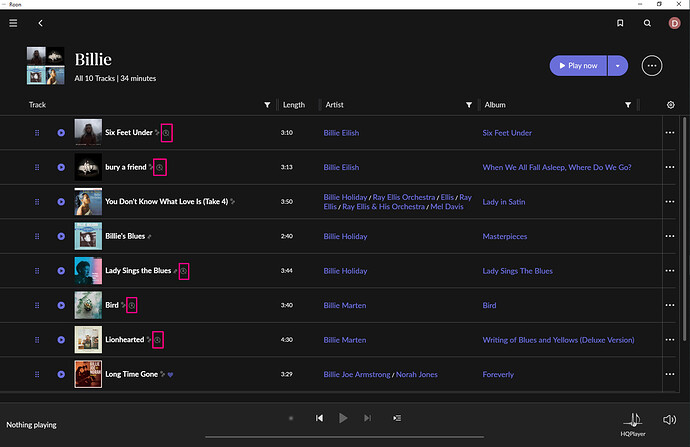 In the playlist, you can spot immediately which track is a Qobuz track, and which track is a local (ripped CD or download) track.
What you cannot see on your Playlist view, if a Qobuz track makes part of your Library (all local tracks per definition do).
Only by investigating a singel track, you can find out if it belongs to your library or not: 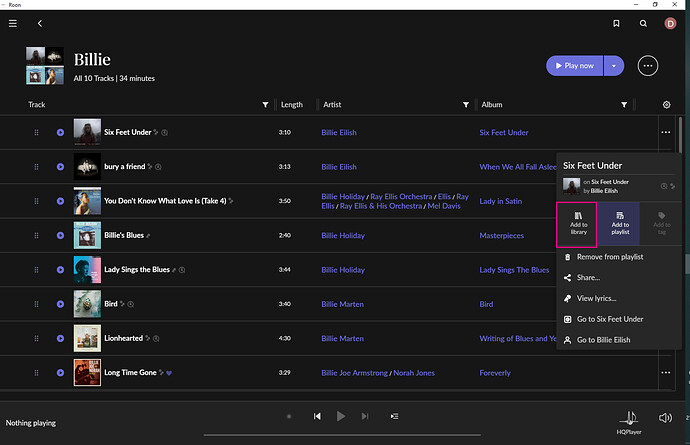 image1627×1050 176 KB
In this example, as the Billie Eilish track ‘Six Feet Under’ offer you the possibility to add it to your library, i.e. that it is not yet.

Maybe you can check a couple of tracks to see if that leads somewhere or (most presumably) not at all.

I’m checking with the team on this. Thanks for reaching out!

Like @anon90297517 we’re thinking that it looks like there is a difference between how in library and out of library unavailability is appearing. Good eye, Dirk!

We thank you for bringing this to our attention, Alan.

I only have iTunes tracks in my library, as far as I know.

Forget this earlier claim, I have hundreds of non iTunes tracks in my library, I’m a bit slow on the uptake sometimes.

If you’re able to fix it so that all unavailable tracks are clearly identified that would be a great help. The bright red ‘Unavailable’ notification is the hardest to miss IMO.

We’re continuing to investigate and will provide an update once we have more information.

In the interim, would you mind adding a few of the tracks that you know to be unavailable but aren’t in your library to your library so see if that does trigger the appearance of the red “Unavailable” banner above the track title?

We appreciate your help with this!

It also happens the other way around. “Unavailable” tracks become “available” such as nearly every track on the Joni Mitchell Reprise remasters, which have become available today. Alas there is no way of finding this change of availability out in Roon, you have to check with the Qobuz app itself.

In some cases, it’s because the album hasn’t yet been officially released. [example: Pierre-Laurent Simard: Beethoven Piano Sonata No 29]

Tried what you requested with one of the original tracks I flagged up, Vortex by Yotam Avni. Pic below shows that it will not play, despite no indication that it is unavailable on Qobuz. 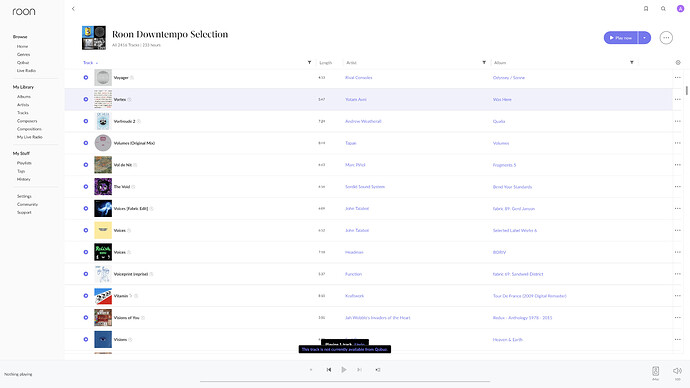 Pic below shows the track after it has been added to library, with red ‘Unavailable’ notification above track title. Hope this is of help. 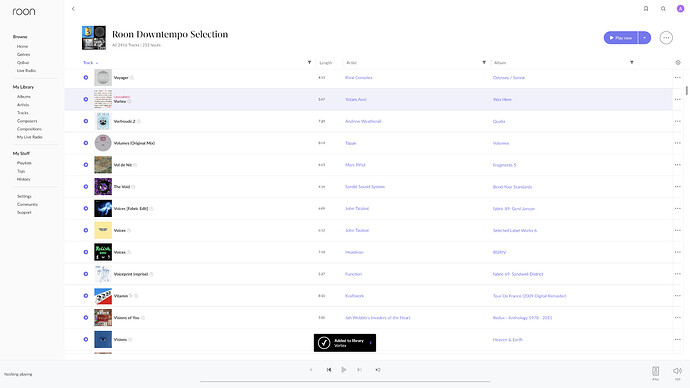 Another eight days sail by folks. Anything happening in Roonworld?

So, only if that track can be found at Qobuz itself, it would be able to be played.

But, as indicated in both pictures, the track is just not available to you. I have no clue how it got in this playlist in the 1st place, but there is nothing Roon can do here.
Dirk

I’ll try and explain how I use playlists on both Roon and Qobuz.

In Roon I have created a number of genre-related playlists such as Downtempo, Disco, Ambient etc, and these will often have thousands of tracks in them (I think the Roon limit for a playlist is 5,000), and I like these large playlists for playing on shuffle when using Roon.

I also have a lot of smaller, curated playlists in Qobuz, and I create these in Qobuz because I can download them onto the Qobuz app on my phone and listen to them when I am away from home. These playlists are often composed on Roon, and then I transfer them over to Qobuz using the ‘Add to library’ function. Once the Qobuz playlist has been established from the Roon source playlist, I delete the Roon version of it, as I can always access the Qobuz version using the ‘shared playlists’ option in Playlists. As a result my large, genre-based playlists in Roon, which the smaller Qobuz playlists will have been created from, will end up having some tracks which are in my library, but the majority of which are not.

I used the track Vortex by Yotam Avni to illustrate a point, ie that it was once available (I would not have saved it to my Downtempo playlist otherwise), but since that time it became unavailable, probably because licensing arrangements for that album changed on Qobuz. It still appeared to be available after that point, because the red ‘unavailable’ notification did not appear above the track title in my Roon playlists. It looks like a track I should be able to play, when in fact I cannot. If I add the track to my library, as illustrated in my earlier post, then the ‘unavailable’ tag appears, but my point is I should not have to add a track to my library to find out whether or not it is currently available in Qobuz, Roon should have some way of informing me of this fact.

I have nearly 2,500 tracks in my Downtempo playlist, and I do not know how many of them are unavailable at present, because that information is only being communicated to me by Roon if the tracks are in my library, which I think is a major failing, and one which I think Roon should rectify as soon as possible. Roon is a conduit to Qobuz, and if a track becomes unavailable on Qobuz then it is greyed out on the Qobuz app. There should be some way of alerting a listener like myself, who may have saved this particular Qobuz track in a Roon playlist, but not added it to their library, that they can no longer access that track. Agreed?

That was a long summary, but I hope it explains my issue more clearly.Thanks for your input.

Thanks for the indepth explanation.

However, I have no good news for you.

To summarize it in one sentence:
Qobuz changes are notreflected in Roon.

If you add an album (e.g. prerelease) is added to your library , whatever changes take place at Qobuz are never updated in Roon.
This is exactly what you experience.
Unfortunately Roon only checks at what is advertized at Qobuz, at the moment you take a look at it . Adding it to your library/playlist unfortunately makes it even worse, as it will never update, unless you do it yourself.

The question that remains is how difficult it would be to realize this. Even if Roon would be able/willing to support this, I am not sure Qobuz is ready to support this technically.

In my case, listening primarily to albums, I manage myself.
In your case, focussing on playlists, I feel your pain, but I do not see a workaround, let alone a solution.

At the other hand, it is clear that Roon is now putting all its bets/attention in supporting Qobuz/Tidal.
They know if these 2 go down, Roon will be out of business rather soon than later.
Time for a well documented feature request.
Dirk

To add some context here — This issue has been escalated to our product and development team and there is a ticket in about this as our team looks into potential changes here. This is something that will take some time and our team is looking into options here, but this will not be something we will have updates on in the immediate future. When we do have information on this we’ll be sure to reach out!

This topic was automatically closed after 18 days. New replies are no longer allowed.