Questions about watched and organized folders

Tried to post this as a reply to a FAQ but got no response so am bumping to a new topic. Here’s a link to the FAQ which will help make sense of my questions. https://community.roonlabs.com/t/whats-a-watched-folder-whats-an-organized-folder/119?u=tlea

I am still having trouble with a few concepts related to watched and organized folders. You might respond by saying “try it and see for yourself”, which of course I am, but I’m getting erratic results. I’m not sure if that is because of the complexity of my library (>70,000 tracks in a variety of formats stored on a NAS) or the feebleness of my core processor (MacMini 2009 w/4GB RAM) or something else. I’m trying to get an idea about what I should expect as a frame of reference so that I can evaluate Roon’s utility for me. I searched the forum for answers to my questions but didn’t really find clear answers.

Questions about watched folders:
Does Roon scan subfolders of a watched folder or just top level? When I imported for the first time it drilled down into the subfolders, but when I’ve added music through iTunes (which automatically gets copied to a subfolder), it isn’t showing up in Roon.
How often does it scan; e.g. what is the expected lag time between when I add a track to a subfolder of the watched folder and when it appears in Roon? See above question. Maybe I just need to be patient.
How can I force a scan to speed things up? I tried quitting and restarting Roon on the core server, and the result was that it re-scanned the entire file structure which took several hours. Doesn’t seem right.
How does Roon handle non-music files located in the same path, like audio books, podcasts, and movies? It looks like it imported the audio books but there is no tag that IDs them as books (as iTunes does).

Questions about organized folders:
“…files will be moved to the appropriate folder…” What does that mean? Locates or creates an artist subfolder in my music folder on the NAS?
“…music you drag and drop into Roon will be copied to your organized folder…” Drag and drop what from where into where? Can you give an example? Do you mean for instance drop a downloaded .mp3 onto the Roon desktop icon or into one of the Roon windows?

Sorry to seem dense, but I really want this to work for me and I have a limited time to figure that out.

Disappointed that I am not getting input on some of these questions, and surprised that I seem to be the only one asking. They seem pretty fundamental to me. Let me boil it down to the two issues I am struggling with the most:

Right now it isn’t working smoothly for me, but I concede that I might be expecting more than it can deliver.

If I enable a watched folder, does Roon watch only the top level folder or does it also watch subfolders?

FYI I’m not w/Roon, but yes – it also watches subfolders.

If I add music to a watched folder, how long should it take before Roon scans it and adds the new music to my library.

In my experience w/W7 fed from NAS, just exit Roon, and re-invoke, and Roon will (within about 15 seconds or so) start checking your watched folders for changes. For me, w/about 10 folders & about 170k tracks, this takes just a few minutes.

Click on the spinning circle in the upper-right to check your progress.

It’s rather primitive to have to quit and restart to invoke a scan to recognize newly added content. Seems like there should be a setting to automatically scan at a definable interval and/or an immediate “rescan” button (like Firefly had before it went defunct).

I have a fraction of your collection, about 71k tracks stored on a NAS on a pretty fast GB LAN, but it takes more than a few minutes to scan.

I want Roon to be the solution and am willing to pay for that, but so far it’s falling short of expectations.

[quote=“tLea, post:4, topic:2092”]It’s rather primitive to have to quit and restart to invoke a scan to recognize newly added content.[/quote]Roon watches the folder (inc. subfolders) in real-time. 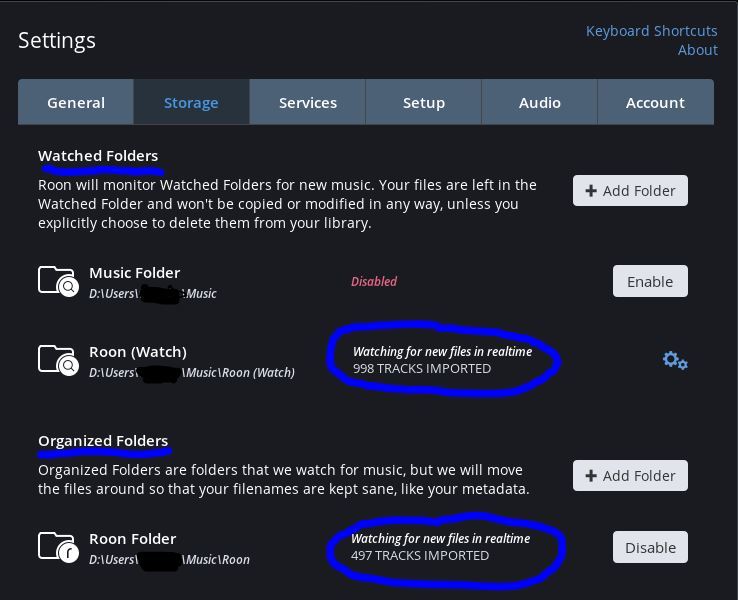 True – I’ve seen some pretty quick real-time changes, and I didn’t mention that. Still, if you want to “press a button” to re-scan or re-index (i.e. give Roon a poke in the eye), exit & re-entry is the only way I’ve found to do that. I think a re-index button would be useful, but it’s certainly functional as-is.

On Windows Roon gets real-time notifications from the operating system when things change: if I copy some files in a directory and switch back to Roon, it is already visible in the browser before I get there, usually already identified.

It is certainly possible that certain combinations of platforms work less well. There has been some talk about how to configure a NAS with Mac OS – I know nothing about that, don’t have a Mac.

Sounds good in theory but in practice it doesn’t work that way for me. My screen looks like yours, but new content that is ripped or otherwise added to the watched folder doesn’t show up in my library until I force a rescan by exiting and restarting Roon. Maybe it’s a Mac OS related bug as suggested by AndersV in this thread. Or perhaps the size and diversity of my library, 71,000+ tracks, is causing the problem. Since iTunes can manage it I feel Roon should also, but I am not ruling out the possibility that I have something set up wrong which is why I am seeking help from the community.

Like @AndersVinberg I’m not a Mac guy either but I suspect your Mac is using an AFP share to the NAS than rather SMB.

I did a search on this forum and found this
Best practice for SMB mounts on Yosemite as it relates to Roon which may help you.

Carl:
Thanks for taking the time to respond. I am mounting the NAS using smb:// (which is actually a Microsoft protocol) not afp:// which is older, near obsolete technology in the Mac/Unix galaxy. I had previously read the post you referenced but didn’t learn much from it except that one of the Roon moderators recognizes the shortcoming and promises to try to do better sometime “in the near term”. I’ve got two days left on my two week trial and am leaning toward canceling. My impression: great concept, still in development. Maybe I’ll check back in a few months to see if it survives.

This is not my area of expertise, it’s more @mike and @brian … however, what is your server? is there a chance you are using smb1 (cifs) instead of smb2?

Hi @tLea – sorry we missed this thread. I just sent you a PM so we can take a deeper look, and get you some answers.

Read it over, let me know your thoughts, and we’ll go from there. Thanks!

Roon monitors all my “Watched Folders” and all new songs I placed in those folders appear ‘almost’ instantaneously: but of course, mine is only 1-to-2 folders deep and the HD is connected directly to my MacMini FW800 port;

I tested using the NAS where all my songs are Backed-up and the same experience is true (sorry, I don’t know what protocol I am using - I just connected the NAS to my router and that’s all I know);

I haven’t tried the “Organized Folders” for ‘fear (probably unfounded)’ that my files will be ‘all over the place’, plus, ROON does not seem to recommend it for ‘daily use’.

You have such a large collection compared to mine having only 11 Folders and maybe less than 2,000 songs.

Best wishes with your system.