I think it needs to be clearly stated that the new R128 volume levelling really works well. It must be hard for Roon to have worked so long on this aspect to see a lot of us, me included , bemoaning the DR values, but for their main purpose these do work really really well.

It will make listening to anything that isn’t just one album so much more enjoyable.

I’m enjoying a radio mix of Bob Ludwig produced albums, which is giving a nice eclectic mix this Saturday afternoon with a good hint of spring in Dublin. 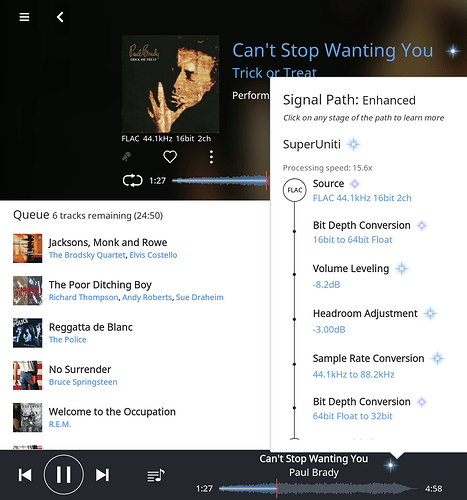 It also appears that the volume levelling works for Tidal albums whether they are in my collection or not.

@joel Question for you regarding Tidal and VL. When playing an album from Tidal can it only do it at the track level and not album level? Right now I have it set to Auto and I am playing a Lou Reed album that is volume leveling each track different.

That specific question is one for @brian.

I don’t remember where I read it but I think the answer Tidal is always track level VL.

Thanks, that’s what I was afraid of. It makes listening to full albums in Tidal difficult. The reason I like the VL now in Roon as it’s very high quality and I can set it to Auto and forget it. But I understand that it would be difficult for album leveling for Tidal playback.

Actually, I’ve just remembered: we get the R128 number from the TIDAL audio stream, so I think that it is track-specific.

I wonder if you can also get in the future the R128 number from Tidal for the complete album? Much like the info we have for our local library which has the track gain as well album gain for VL.

I think the devs have said that they are trying to get more information from Tidal, perhaps that included Album VL information and/or waveform for individual tracks.

Does anybody know if f.i. the Roon Essentials version (that’s gonna be installed in hardware from certain manufacturers such as ELAC) also has the volume levelling implementation of the R128? In which case, does it work as well as the proper Roon does?

Can anyone confirm that the R128 loudness scanner measures all channels present in the recording? In other words 2 for stereo and 6 for 5.1 recordings?

I think it needs to be clearly stated that the new R128 volume levelling really works well. It must be hard for Roon to have worked so long on this aspect to see a lot of us, me included , bemoaning the DR values, but for their main purpose these do work really really well.

It will make listening to anything that isn’t just one album so much more enjoyable.

Note: Yes, I know this is an old thread.

EBU R128 is perfect for volume leveling and the fact that Roon uses this to do volume leveling is great. People wanting the Dynamic Range Database DR numbers too is not a criticism of that choice. It is a realistic request based on the fact that the DR database numbers are more reflective of the actual amount of compression any given track may have. Look at this:

“Unlike R128 and BS. 1770 meters, DR measures dynamic range from the perspective of a music engineer’s needs. In contrast, R128 and 1770 are designed to control loudness for commercials , not measure dynamic range for music, especially pop music. DR isn’t designed for broadcast loudness control, it’s purpose is to gauge the amount of dynamic range reduction, or the absence of dynamic range contrast. Designed by a member of the EBU ploud committee, the same body that created R128, DR informs an engineer about how much the mix is being or has been “stepped on,” dynamic range-wise, not about “will it pass through a broadcast chain without loudness reduction?”

I used to use volume leveling but I have turned it off. Why? Two reasons. First, it was sucking the life out of the music. It was diminishing the soundstage by making it less 3D. Second, I started listening to full albums almost exclusively so volume leveling became unnecessary as I have a remote control volume and don’t mind making an adjustment for each album. Though most of the time I don’t feel the need.

Agreed, only time it’s useful is if letting Roon Radio run amok rumaging through my collection…which is generally only when I want background music.

I started to use volume leveling because in this period I will mainly use Radio or shuffle. Quality wise is it fine to leave everything as default on auto? I see -23 as target volume…any need to change that or it’s good as it is?

In my opinion it’s not sucking any life or dynamics… I think the point is that it’s not possible to match the volume for a proper comparison… considering that volume leveling is adjusting very specific/precise (es. -8,3 or 6,8)

Following on my previous question…what is the behavior of R128 when there are tracks “exceeding in positive” the -23db? For example, I have an album that, according to Roon, should have a gain of +3.6…would this mean adding clipping using Volume Leveling?

How could you get clipping???

Your math is off. That is not how volume leveling works.

Thanks for the explanation, it was basically my doubt. Is volume leveling taking into consideration these type of situations?
Also, I read somewhere that headroom adjustment is not needed for volume leveling, so in case I don’t use any dsp can I keep it disabled?

With leveling enabled, I prefer to set headroom adjustment to 0 but leave the clipping indicator enabled so I have some visibility, but yes, since volume leveling nearly always will attenuate one usually does not need additional headroom enabled as well.

Digital clipping is bad, very bad with some dacs, others soft clip but best to be on the safe side. A decent system will have probably/should a minimum 20dB+ to give up for headroom and still not approach the system noise floor in any audible way.