Under Madonna I’m not getting any Tidal results, what’s up with that? 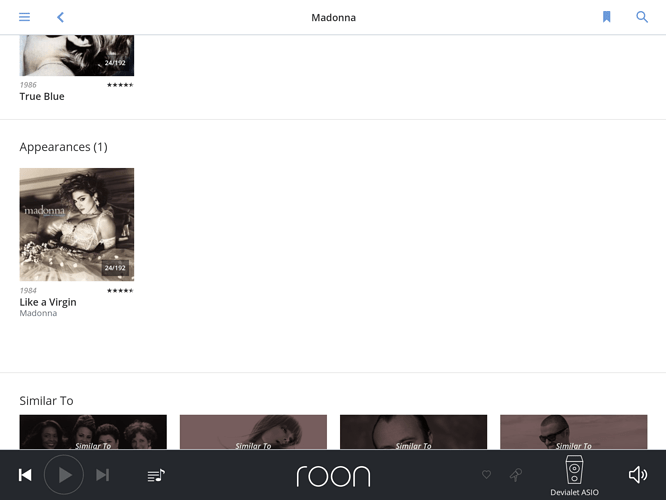 I am. How about other artists?

Other artists are fine. She is there in the tidal app for me, I was going to blame being Canadian.

Rebooting core fixed it, which is very odd.

Seems like some kind of issue but not sure how the guys will be able to reproduce it to fix it.

Have seen similar. A Roon Core restart had always fixed it. I just wish it could be restarted from the iOS app as this would make it easier for users that don’t want to (and probably shouldn’t need to) learn the Roon infrastructure and things like VNC and headless Roonserver.

I just saw it again with a different artist. Is this something the Roon team can reproduce and fix? Having to reboot the Core is getting a little annoying.

I’m sure if we can reproduce this consistently we can fix it, but it’s often very tricky to find the steps for intermittent issues like this.

Is there anything you can tell me about what was happening before this occurred? Maybe you rebooted one device but not another, or brought them up in a specific order? Maybe this only happens on one platform?

Anything you’ve noticed about the performers it’s happening to? I assume they have a mix of library content, and TIDAL content?

One thing I just noticed about your screenshot in the original post is that Like A Virgin is listed as an appearance for Madonna, as opposed to being one of her main albums. Roon has support for multiple artists with the same name, so this points a possible equivalence issue, meaning our system thinks this is a different Madonna, who appeared on Like A Virgin, as opposed to releasing it.

That said, I just took a look and the only other Madonna in our database does not have an appearance on Like A Virgin, for what it’s worth. So, there goes that theory

Let us know some more details here @DrTone and we’ll see what we can find. I’m sure there’s something going on here, we just need to figure out how to make it happen.

@mike It’s hard to tell you what happened prior as it it only randomly happens on an artist. So who knows for how long the artist was missing Tidal results before I noticed. First time was Madonna second time was Destiny’s Child. Maybe it’s the type of music?

I’m windows at the server, apple everything else… @hifi_swlon is all apple I do believe and he’s seen similar.

The only thing I can possibly think of was an internet outage possibly prior to both. I upgraded the firmware on my router Friday and shortly after I discovered the missing Destiny’s Child Tidal results. A reboot of the core solved the issue both times.

A reboot of the core solved the issue both times.

Any idea if remotes were restarted too? Did the issue show up on every remote? It’s ok if you’re not sure, but if you the specific boot orders, that’s sometimes really helpful.

iPad definately not, but it would do it’s normal reconnect on hydration. I don’t remember if I restarted my OSX remote, I don’t think I did both times I rebooted the core but I could be wrong. Sorry.