I’m running a Raspberry Pi4 with Ropieee, it plays DSD512 files via USB to my DAC no problem. It (The Pi4) is also running Ian Canada FIFO Pi + I2S HDMI Transmitter boards supplying I2S to my DAC. I have tried various HAT drivers which in turn ‘unlock’ different bit rate/depth capabilities within Roon and sound is great (some drivers don’t work as the selected HAT isn’t connected).
It doesn’t seem to handle DSD256 or DSD512 via I2S though - it starts playing then halts after about 10 seconds. It would be great if there was a HAT agnostic driver allowing configuration of certain parameters…? Is anyone running similar Ian Canada hardware? If so, how are you configuring things? 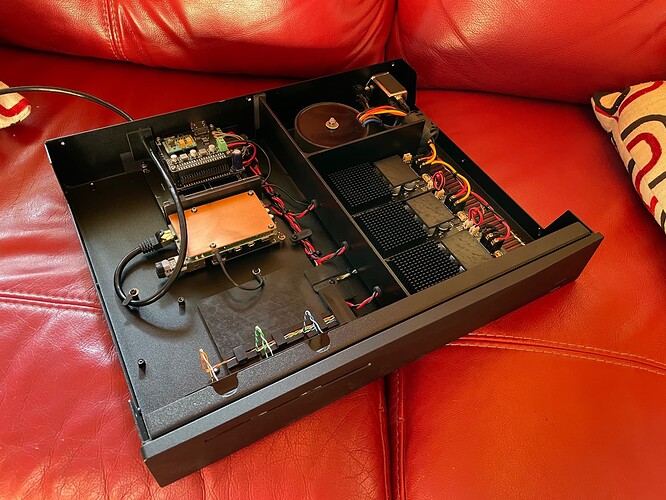 And direct is good for high rate DSD?

I’ve got everything working, upto DSD128. Sounds fab. Basically have USB and I2S configured as two different devices in Roon but feeding the same DAC so I can switch between them on the fly / compare files etc…
DAC sounds good and sound very locked in feel to it, very happy.

Yep and Audiophonics HAT selection within Ropieee GUI provides best sample rate / bit depth range while not actually having a DAC hat fitted.
What IacCanada boards do you have?
Be good if IanCanada came up with a driver that mapped Pi & his Board capability…

I use FIFOPi Q3 with reclocker Pi and transmitter MK2. I use Audiophonics QSabre driver in Ropieee and have 384 PCM and DSD128 (DoP) with Rockna WD DAC. In Ropieee the driver is glitchy. I have to restart the RPI from time to time. In Moode with the same driver is stable and runs without issues. I only use Ropiee as it has the Signalist NAA embedded (Moode does not) and I test several filters with it.

I would love to see a generic driver for RPI that allows higher capabilities or that can be generic tuned for external DACs connected over i2s LVDS with max RPI supported capabilities. I am not a specialist but it is kind of strange that nobody thought/implemented one so far (the “generic HAT” - Raspberry PI DAC is limited to 24/192 and DSD64 as far as I am aware). Also native DSD is implemented over USB only (no i2s LVDS support - also as far as I am aware)

PS: What case do you use? Did you use CAD for customizing it? If so would you mind sharing? (planning a very similar approach but with stationpi pro)

Same re hardware, driver and spec’s achieved. I’ve not really had any issues with Ropiee though - I like it for it’s simplicity and logical operation.
Totally agree with the Pi driver scenario, I’m not sure what Pi4’s maximum capabilities are but hopefully it could match its USB capability in regard to audio streams via I2S, then would be great if someone could write a driver allowing discrete setting of processor clock, stream sample, depth reates etc.

My case is an empty shell from an Innuos server to match my Innuos Zenith III and everything was made one off to suit. I laid everything out 1st, transferred the support post hole locations via measurement then drilled and countersunk the screw holes. Bought all matching black machine screws so even from the underside, it all looks ‘factory’ I also machined an aluminium block to sit between the Pi processor and case so the case acts as a heatsink… its been playing all morning (stays on 24/7) and is at 33 degrees (C)

I have only tried one other transport in place of it and found it a bit ‘thin’ & ‘treble’ sounding… very happy with this unit, as you can see, half the case is power supply and I think that plays a big part. I’ve also put a filter on the Pi USB. A bit subjective but seems to give the sound a more locked in feel - if I listen to it with the filter removed it sounds different - I’m not sure how to describe it, on some recordings, the audio just stands out more - maybe a noise thing?

I’m currently feeding it into a Holo Spring 3 and the soundstage for one thing is amazing!