Also this extended batch is going fast, 30% gone in hours.

So if you still want this extension to Roon and your Pi, you have to be quick to get it for the disounted price.

Backed it (or rather my wife did)!

What is the difference between the two tubes they let you choose from?

Which sound best combined with what?

The pinout difference between the 12au7 and the 6DJ8 is the 12au7 has a more flexible heater configuration.

Which one to use really boils down to which one sounds best, which has more to do with the manufacturer etc. than the type.

They supply them with new JJ Electronics tubes (as they need a stable supply).

Btw they just confirmed on their Kickstarter page in the comments section that they will create RoonReady certified firmware!

JJ have been making tubes since 1994 on the old Tesla equipment in the Slovak Republic. I’ve used their EL-84 in my VTL Tiny Triodes and they’re a good modern tube, I prefer them to Sovtek.

I use the Chinese Psvane (or Pavane, they trademarked an archaic ‘a’ as an ‘s’) 6CA7 in my Manley Snappers and am very happy with them. I would like to try their 12au7-T in this unit (reviewed here and here ) but they only seem to be available at about $70 USD a pair.

One of the things about this HAT using a single tube is that there’s not as big a demand for single old tubes, most people want pairs so singles are something of an “odd lot”. I’ll be looking at Siemens, Mullard, GE old tubes. Tele’s are expensive but good. The main thing to keep in mind when buying old tubes is that fakery is rife. I’ll probably roll some single used tubes through this, rather than NOS for that reason. This eBay page looks an interesting start for single used Mullard.

My guys are looking forward to digging into Roon. Probably week after next. We already told our backers we would be doing this, so we need to execute. We have our rev. 2 boards back and running. Once we iron out a few small issues, we will be able to devote more time on the software front. In addition to Roon we’ve been asked to insure Volumio, OSMC and Picorplayer all run “out of the box” Hopeful you guys are not too jealous!

From the beginning of our entry into the Pi media market, we have wanted to create a platform to take on Sonos. Now with Roon we can do exactly that. Both at a DIY level with the Hats, but also with finished players, DAC/AMPS and even speakers. I used to build speakers myself back in the day. Since I have already surrendered to tubes, why not go all in with the way-back machine!

We are very open to ideas for products and I can assure you that ideas we get from the Roon community will be taken very seriously. In fact the 503SPD1 and SPD2 were designed to meet requests that came from a great little audio forum www.superbestaudiofriends.com.

Let me know what you think, we can even create Roon labelled products for you!

@Michael_Kelly, can you share the components list of the Hybrid Amp, please. We (the community) are more than happy with suggestions on components that may result into improvements.

All resistors are thin film surface mount. All ceramic caps in the audio section are NPO or X5R temperature stable dielectric.

Regarding good power supplies, an amazing one for the Raspberry Pi 3 in Audiophile setups is this one: https://www.wifimedia.eu/nl/ifi-audio-ipower-5v-25a.html

It is a very low noise switching power supply for <50 euro.

It probably doesn’t have enough oomph to supply to the Hybrid HAT. You can find them on AudioPhonics: http://www.audiophonics.fr/en/hi-fi-power-supply/linear-power-supply-double-2x-12v-2a-p-10252.html

Maybe you are able to build Jay’s one in a configuration that supplies the Hybrid HAT (and the Pi of course) with some clean power. It should be doable with eg. http://www.ebay.com/itm/S22-Super-regulated-linear-power-supply-board-5-30V-LPS-KG-6800uF-50V-Versio-PSU/131767460827 and a R-Core / Talema.

After reading the reports about how the 6DJ8 is performing better in the testing I ransacked my tube box but couldn’t find one. So eBay to the rescue.

I am a bad naughty Andybob: 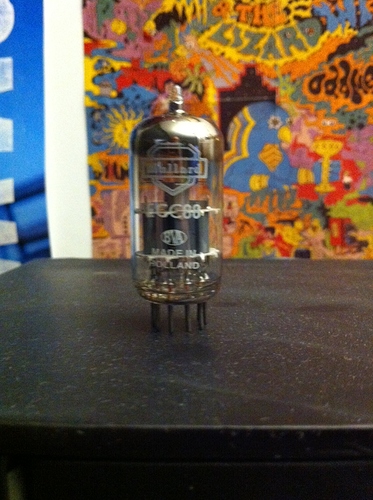 Mine’s supposed to be shipping any day now…

We are shipping that reward level now. Yours is scheduled to go out Wednesday or Thursday latest…

Very sorry to see the software shutdown gone. Would have preferred to retain it and lost the line in myself. Also not a fan of the new heat sink looks, but they’re not usually made for looks. Be interested to see what you think Rene.

Yours is scheduled to go out Wednesday or Thursday latest

And so it did – thanks! It made it across the ocean in just a few days and as of monday is in the dark confines / grubby mitts of Dutch customs, who are probably wondering a) what the hell it is and b) how to tax it maximally.

In true Kickstarter tradition there were a few changes, hiccups and (slight) delays along the way. I must say that the Pi2Design team has been very communicative and straightforward – well done, guys!

There appear to be 2 issues left at this stage:

Needless to say I can’t wait for it to be released and delivered. I will be toying with using the Tube HAT as intended (using a Pi3 connected to it) and as a stand-alone amp with a Pi3/IQAudio PiDAC+ and a Pi3/Hifiberry DAC+ PRO. Maybe it’s finally time to order a Mamboberry and a Audiophonics DAC HAT as well…

It’s here, playing stand-alone from a PiDAC+ line-out while waiting for yet another Pi to be delivered: 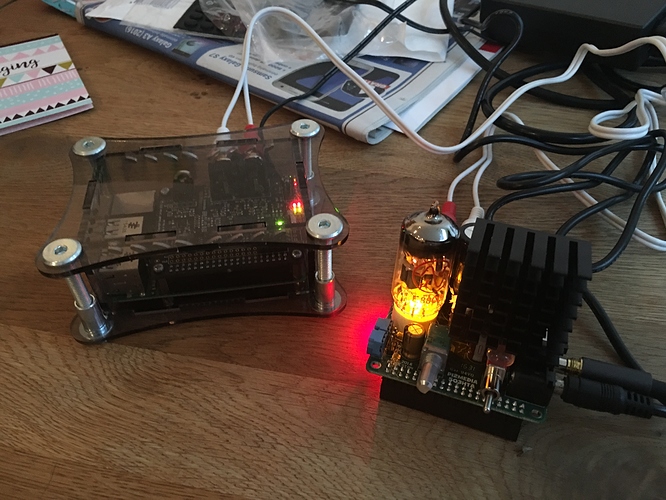 Mine arrived today and I am clutching the parcel in my hands on a tram heading home on a rainy Friday night. Lets see if I can get it working and configured tonight. Hope to use an external WiFi dongle wirh a Pi2.

I’ve become slightly less enthusiastic: the Tube HAT appears to be very susceptible to noise. A GPIO-connected Pi is basically unworkable, even on its OWN PSU with the 5V pins bent out of the way. The treble roll-off at 44.1kHz is very real and needs to be rectified ASAP, as it renders music basically unlistenable.

For now, I have assembled it stand alone – which is OK for me. Still sounds nice, if still not entirely stable regarding noise. More testing and burn-in over the weekend. 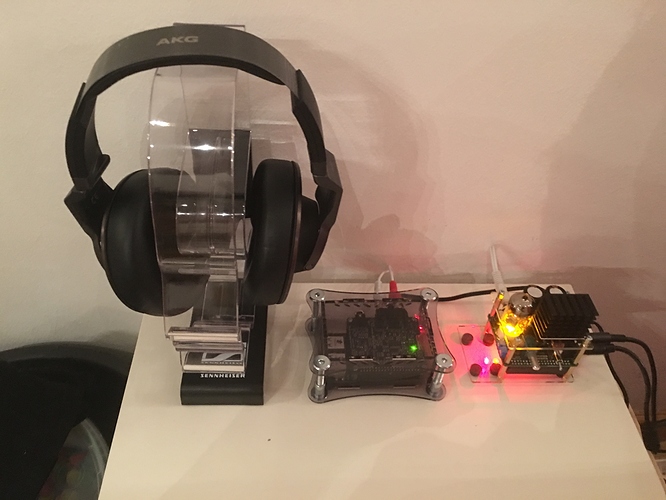 Let me know how you get on, @andybob! And mind the gap while offboarding that tram…

the Tube HAT appears to be very susceptible to noise

as far as I can tell… the Pi is extremely noisy: had to move it far away from my tubes pre and amplifier to stop the buzzing

the HDMI port looks to be the culprit (remember I asked how to turn it completely off?