Got it all connected up to a Hifime USB dac with no problems at all. Makes for a very cheap Roon endpoint. 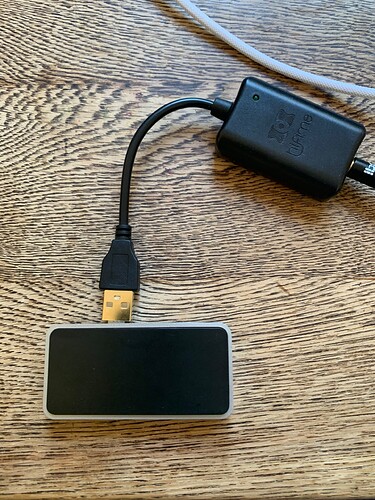 Very nice and compact little device.
Going to sell a lot of them with that extra bit of power.

Hi Neil,
Did you use RoPieee by chance? I’m waiting on my Zero 2 kit to arrive and was hoping a straight install of RoPieee would do the trick.

No, I didn’t use RoPieee. I just installed Raspberry Pi OS Lite and then installed RoonBridge and Shairport Sync to get Airplay support as well.

Mine is ordered too, should get it in a couple of weeks as the first batch is sold out. maybe with the zero DAC and a pair of IEM’s can use mobile around the house on a battery

@spockfish Harry will this be supported for Ropieee?

Yes, see the other thread. Currently looking around if I can get one earlier than January

anyone tried to run ROPIEEE on the pi zero 2? Do I need a USB network dongle for it to install?

RoPieee does not support the Zero 2.

However, the the new beta (“NG”) ‘almost’ does. And it indeed requires an USB network dongle for initial setup.

I’ve run the roodial on zero 2 with the roon bridge installed and it’s working fine for usb dacs and probably hats if you can select one.

Awesome. I just ordered the Pi zero 2 w as well. Hows the perfromance as an endpoint? Im adding the HIfiberry dac2 HD on top of the Pi as well. Im hoping for comparable resu;ts as my other Pi setup running Allo Boss2

Be sure to order the P0W2 with the header installed if you plan to use a hat. some versions don’t ship with a header, and some might but not soldered on. both of mine were headerless which is fine for me.

You also need a USB-Ethernet adapter to install with Ropieee at this stage - keep that in mind as Harry noted above.

Hi, Yes I ordered one those Vilros Kits seeing no single boards could be found and comes with the header that I just have to solder in. The case is kinda neat as it has opening for adding hats on top. Not ideal but Im looking for a cheap alternative. Wouldnt I be able to just install a OS on SD card. Why would I need a USB network adapter?

I’ve been successfully running 2 endpoints on Raspberry Pi Zero 2 boards without issue. In fact, I initially installed DietPi with Roon bridge, and while it worked, I did experience drop outs. I haven’t had that issue (so far) with the Ropieee beta installs.

Because as I and Harry both noted Ropieee requires an internet connection on installation. Other distributions might not

I just flashed Raspberry Pi OS to an SD card and then installed RoonBridge manually. I attached a monitor to configure, but you can just set it to run SSH and connect to Wifi on first boot and then connect over SSH to install RoonBridge.

There are plenty of online guides detailing how to do this, one is: Boot Raspberry Pi with wifi on first boot – E-Tinkers

Watching this with interest, could do with a small simple endpoint to output to my Chord Mojo. My fifth Pi4 seems a a bit overkill!

So I followed instructions and I get to the end after few minutes. How do I know if its installed correctly. I dont see the rpi on my wifi

Im lost… I tried running Hifiberry Os lite and I just get a rainbow screen. Then tred RPI os Lite with instructions for wifi boot etc and it gets to what looks like its done then I cant find it on my network. Can I install regular RPI os with desktop? I have monitor and keyboard.