Im lost… I tried running Hifiberry Os lite and I just get a rainbow screen. Then tred RPI os Lite with instructions for wifi boot etc and it gets to what looks like its done then I cant find it on my network. Can I install regular RPI os with desktop? I have monitor and keyboard.

Ok so now I installed Rasp pi full os and followed instructions to use SSH and installed Roon bridge. I successfully have done that however now it sees the Pi zero 2 W but not the Dac hat. A HIFIBERRY DAC2 HD. Roon shows
VC4-HDMI and device not found.

Any ideas? I don’t think I did the proper update with config file.
I added the code per HiFi berry. I entered as shown but then didn’t seem to edit the nano file.

My first step would be to SSH onto the Raspberry PI and make sure that the DAC is visible to ALSA. You can get a list of all the visible sound devices by running the command:

And it will list all the devices it can find. I think aplay is installed by default, but if not I think it’s in the alsa-utils package you can install using APT with the command:

If the DAC isn’t listed by aplay, then ALSA cannot see it and therefore RoonBridge won’t find it either. You’ll need to go back and double check the installation instructions.

If you want more help, please post a link to the instructions you followed so I can go read them.

I had to solder on the connector for the 40 pin wonder if thats the issue. Its not soldered good enough.

Roon Bridge on a Raspberry Pi: an installation guide Your Pi will run off a micro SD-card, that you can insert in the Pi’s card holder. Before doing so, you will need to prepare the card by installing the OS and Roon Bridge. While some of these step my look slightly daunting for the first time, just follow through – it is not as hard as it may look and help is around!

In this guide, I will assume you are using a wired network connection. If you want to use the Pi 3’s WiFi (not re…

I think that the Hifiberry DACs are supported ‘out of the box’ on Raspberry Pi OS these days and you don’t need to do any modifications for them to work.

Check your soldering to make sure it looks OK (no pins are linked together by solder) and use just a standard OS image with just the changes required to get it connected to your Wifi.

I also really recommend these if your soldering skills aren’t very good (much like mine are terrible):

Absolutely no soldering required! All that's needed is a few gentle taps with a hammer and bazinga! Your header is securely attached to your Pi Zero or pHAT. If your soldering isn't quite up to scratch, or you just don't own a soldering iron yet,...

Seems like it’s a bit late for that option…hope you get the soldering sorted out.

Hi, I got it working. It was the solder job. I cleaned it up and bam shows up in roon! Yay. SO successfully have a Dac2 HD on a Pi zero 2 w running Roon bridge. Now to device some sort of case. The case it came with is very small and honestly didnt realize just how small this Pi is. Any suggestions? Its the Vilros basic case. V1 with cutout for hats. SO the dac is exposed on top.

Thank you for your help by the way!

Maybe show a pic of your build

Here it is as it stands. It’s a hac for now but works. 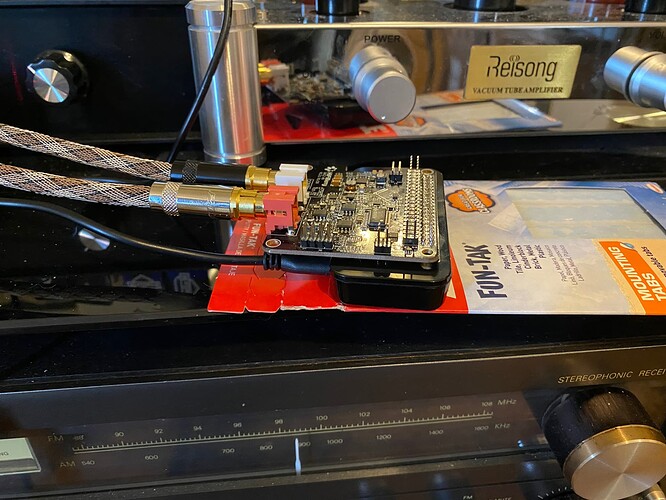 For now it’s mounted on top the Vilros case that came with kit. Then I put both in this cardboard top with Blue tack underneath case.

Don’t see any sort of universal cases that would give me room to mount it better. 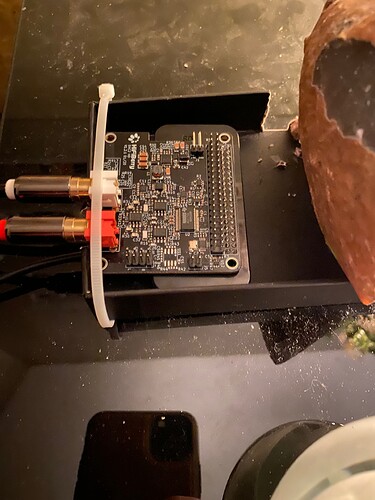 The Pi Zero W is such an amazing piece of electronics. It has so many uses. Three weeks ago I built a Tally System for our church cameras that run on a Blackmagic ATEM Constellation 8K video switcher and it works fantastic. All tallies are wireless and very reliable.

Agreed. Picked one up as well for a new Ropieee endpoint using Harry’s lastest NG build. You do need a USB Lan dongle to do the initial setup. I did have a few dropouts initially but I put this to probably wifi issue and not the build.

Anyone have any suggestions for a way to mount this properly? It’s been working great aside from a couple WiFi dropouts. Do you think the dac Tim runnin PI OS with Roon bridge installed is taxing it? I think I’m going to get a usb dongle to install Ropiee. 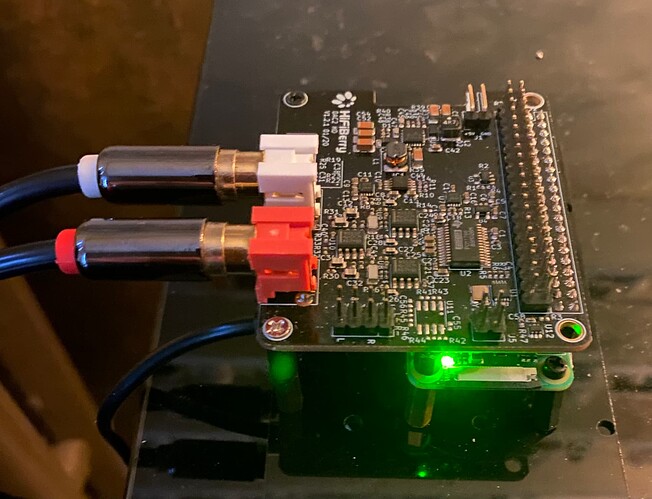 Scrounged up some spare parts and temporarily mounted it to this plastic spare from an Allo kit. Found raspberry Pizero tall case I think could work. 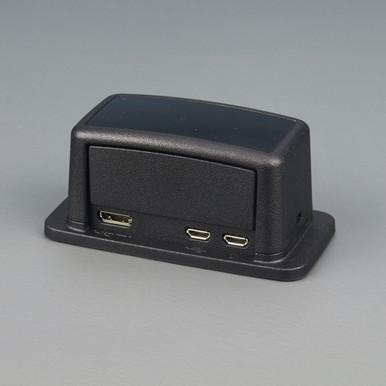 Scrounged up some spare parts and temporarily mounted it to this plastic spare from an Allo kit. Found raspberry Pizero tall case I think could work.

Hmmm… I have an Allo miniBOSS and Pi Zero 2 in the smaller version of that UniPiCase. I think you might be better off getting the HiFiBerry Steel Case and sneaking the power cord out of one of the holes in the side. Either that or design something to be laser cut in plexiglass or 3d printed.

wouldn’t a steel case block wifi signals, unless you pull the wifi antenna also out. Another option is use the hifiberry HAT for zero and use the unicase shared above.

I cancelled that order for that case. I may just keep it open. Hav eit running open at 1.3ghz stable all day. As far as the dac hat The Dac2 Hd sounds excelent. I may say as good or better than the Boss2 I have as my other streamer.I installed diet pi on the ppi zero 2w as well and it free up lots memory (lots lol). My step son has 3d printer he is looking into designing something. Ill update as I go. Thanks