Thank you for your time Rene all the best to you.

Just one more thing I first install Linux OS on the sd card then rasbpian and last the roonbridge Linux correct!

Flash Raspbian to card, boot up the Pi, add the line for the Digi+, reboot and install RoonBridge for Armv7.

I really do wish I understood some of this! Flash the SD card with Rasbian! Energise the di-lithium crystals!

It would be great if some of the knowledgeable on here could do a blog for simpletons about setting something like this up.

Heh… I was just thinking about writing up a starter’s guide for building your own low-cost Arm-based RoonBridge.

I guess I should. But in the mean time: ask away – it’s way easier than you think!

Update 04/03/17: This guide was written in april 2016. While it is still technically correct, things have changed over time. These days, you may want to consider using DietPi or Ropieee as the OS for your Pi-based Roon Bridge. With the advent of Roon 1.2, Roon Bridge has made its appearance: a nifty piece of software allowing to you create audio endpoints with machines otherwise underpowered to run ‘full Roon’. Roon Bridge relies on RAAT (Roon Advanced Audio Transport) – Roon’s own audio distr…

First, thanks Sloop John for saying what I’ve been thinking for four months. It’s bad enough with acronyms but when things start getting fruit nicknames I start to wonder if somebody is pulling my leg. (Not really. After all, I’m a big fan of Schiit.)

But Rene, simpleton geezers like myself would be very grateful for any starter’s guide you might want to author. I believe I have a basic grasp of what’s going on. It’s when cards get flashed (oh my) with ubuntu or whatever that my eyes glaze over and I swipe the page back command.

And should we ever meet, the beers would be on me.

Stay tuned – give me a couple of days.

We’ll get to those beers later…

Rene I too would love some simple step by step instructions to follow to set up a pi3 with DAC board to replace some airport expresses.

Looks like you are connecting them by Ethernet. I will also need instructions to connect to the wifi. I hope that can be done without hooking up a screen and keyboard to the pi3.

And take your time, anything would be much appreciated.

What about the hifiberry amp? That would seem to be a good option for multi room RoonBridge end points.

Oh finally, someone has said it - I am way too shy… I too would like the elegance (not to mention cost) of an RP3 with suitable DAC set up as a roonbridge under instructions that an idiot like myself could understand, which is challenging I know. Roonbridge for Dummies with appropriate bright yellow cover…

Noting this post where Jared (@vaguedetails), a self -described Raspbian noob, runs through the steps he took to install RoonBridge on a pi3 and stream to it via Wi-Fi with USB out to an Audioquest Dragonfly.

The commands to download and install Roon Bridge are here:

For my RPi2 fitted with a HiFiBerry Digi+, I just used the HiFiBerry installer to first install Raspbian onto the SD card to be used in the RPi2.

Then I plugged the SD card into the RPi2, and turned it on. The RPi2 is connected to the Ethernet network, so I used Putty to connect to the RPi2 over the network (Raspbian uses username: pi, password: raspberry as default).

Once connected, then I used the three commands listed on the Roon install page for the RPI2 (it’s an ARM device, so I needed RoonBridge armv7hf):

And that was it… up and running as RoonBridge, alongside my RPi3 which uses an IQaudIO DAC+ card, and the RoonReady software from IQaudIO: 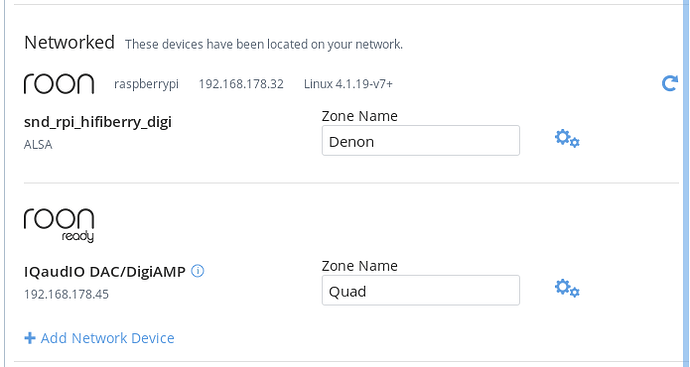 Thanks - my confidence / temptation level is increasing…

If you go down this road please keep us informed on what physical products you actually buy, how are you connect them up together as well as all this flashing of the raspberry pi et cetera.

I’m getting closer to the turning off of the main highway, but I still haven’t made the decision to turn ! Flashing I think I get but when we start talking Putty I’m lost again. What could go wrong for the cost of the hardware right ? If I make the leap I shall be sharing the pain…

I did a series of posts (see the HQP section) about installing the NAA software for HQ Player on a Pi2, Beaglebone Black and Cubox-i. I hadn’t ever installed anything in Linux before so set out the details of burning SD cards etc. Rene (kindly ?) said I made it sound like a Boys Own adventure. But it was pretty easy and fun. The good thing about images on SD cards is that if you ever think you’ve messed up, then you haven’t done anything irrecoverable. I’m going to let Rene provide his guide first, because I can be a bit longwinded

Boys own adventure sounds good. Like a few lurking on the outskirts of the Roon world I am interested by the possibility of using essentially DIY devices to achieve my ends. It seems intrepid and satisfying to get great sonic results from humble equipment. But…I am not overly computer literate and want to feel that understand each step before committing. I appreciate the support though and will attempt it soon. Just have to prepare the wife and kids for the potential swearing…

Paul, take a deep breath, and take the turning. Even if you’re not computer literate, I think we can provide you with sufficient step-by-step guidance.

Putty is simply an application to communicate with your RPi over the network. If you’ve ever used the command line interface on Windows (the cmd.exe application), then Putty is very similar. If you don’t want to use Putty, then you will need to connect a display (using the HDMI connector on the RPi) and mouse and keyboard (using the USB connectors) to talk to the RPi, and do the Roonbridge installation that way. I didn’t have a spare display handy, so I used Putty instead.