Hard to categorize. Is it a feature request or a bug report…

My questions are concerning recording dates. I do find recording dates are important information, especially for classical. I’d like to be able to filter out all my recordings made in Kingsway Hall in the 60’s. I don’t seem to be able to do that.
I can use focus to narrow down on release dates but not on recording dates. Is there a technical reason for that? From an end-user perspective, there seems to be no difference. The recording location seems not to be covered by focus at all. Again: is there a reason?

I also noted - and this was my main incentive to create a topic - that the recording dates given via file tags (RECORDINGDATE, RECORDINGSTARTDATE, RECORDINGENDDATE) are interpreted differently than the Roon editable dates.

It is very common that recording dates are given in the format YYYY-MM, meaning that the exact date is not known but it was recorded some time in mont MM. Colin Davis’ recording of the Symphonie Fantastique, for example has 1974-01.

This is data from Roon 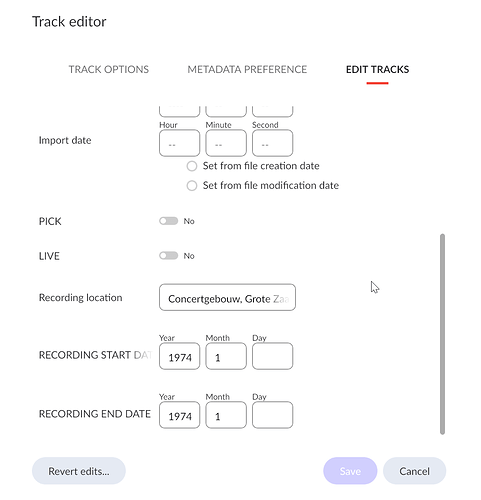 This format is correctly displayed by Roon as “Jan 1974”

If I want to do this with file tags, the system behaves differently.

Setting RECORDINGSTARTDATE and RECORDINGENDDATE to 1974-01 (like the Roon data is presenting it) doesn’t make the difference. It still displays January 1st 1974

Can the system behaviour be corrected so that it is displayed in the same way?