Well I’m not sure about that, so let’s get @support involved to clarify…

My understanding is that the metadata exists in Roon’s metadata cloud. If a users ads an album to his library, the corresponding metadata gets retrieved from the cloud and stored locally. The users Roon Core will now periodically check the cloud for updates on the metadata held locally.

If there exist problems with the internet service, metadata might not be received and saved locally and lead to missing artwork/metadata.

For content in your library, metadata is stored locally in your database. Regular updates from our metadata servers happen to update the locally stored data if there are any changes.

Thanks for this. However, it does add some confusion, because some of the missing metadata (arwork and artist/album info) issues I experience whilst using Roon Radio occurs when Roon Radio is playing tracks from albums that are definitely included in my personal Roon music library.

Surely this means that the culprit cannot be the DNS server used by my ISP since in these cases there is no need for Roon to obtain metadata externally, does it not?

Radio probably does get external metadata, it’s like a parallel universe once you are in roon radio.

Well, I might be wrong, but, I think the following may be what is happening. I have The Rolling Stones’ “Exile on Mainstreet” in my local library. If Roon Radio plays a track from my local version the meta-data will be pulled from the local source. IF, however, Roon Radio selects a streaming version of that album which is NOT in my local library it will have to pull the meta-data.

Well, your explanation sounds logical but at the same time extremely frustrating if it is the case. I would have thought that using a version of an album located locally (if one exists) would be the better course of action for Roon Radio.

I still find it perplexing that the problem was introduced for me in 2 specific Roon software updates. I had had no issues whatsoever with Roon Radio metadata prior to the release of software version 1.7. The problem appeared to be resolved by a subsequent ‘minor’ release some months later (can’t remember the specific release), but then the problem was re-introduced after a further period of a couple of months or so by yet another software release.

This would seem to indicate that there is a potential solution to my intermittent problem that does not involve my changing DNS servers (something I can’t do for a number of reasons), since my ISP and DNS servers have been constant over this entire period of time.

I have just applied Roon Version 1.7, Build 701 this morning.

Every time I apply an update, I live in hope that it will resolve my Roon Radio missing metadata problem. The first 2 or 3 tracks this morning showed full metadata so I began to get a little excited. Unfortunately, it wasn’t to be and the problem started with the next couple of tracks.

Something has changed though!

It used to be the case that whatever data was present continued to be displayed for the juration of the track. However, in both cases with missing data so far this morning, only a background photo was displayed (no album/artist art/info), but the background photo changed during the tracks and Roon Radio ended up alternating between 2 photos throughout the tracks. I have never seen this happen before. Here are some screenshots taken at around 11:45 (UK time) this morning: 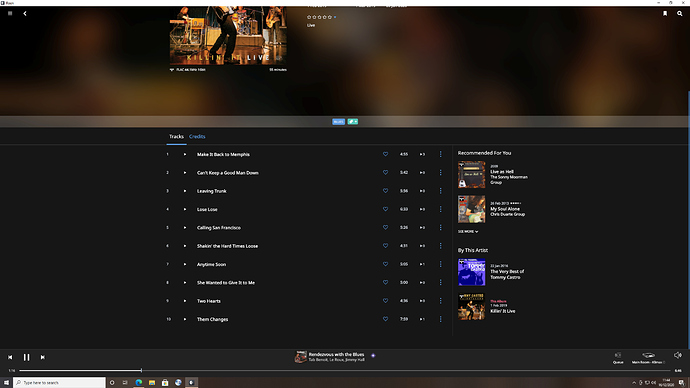 As you can see above, the Roon Radio track playing was Tab Benois -“Rendezvous with the blues”, and the background photo alternated throughout the track between the following 2 photos: 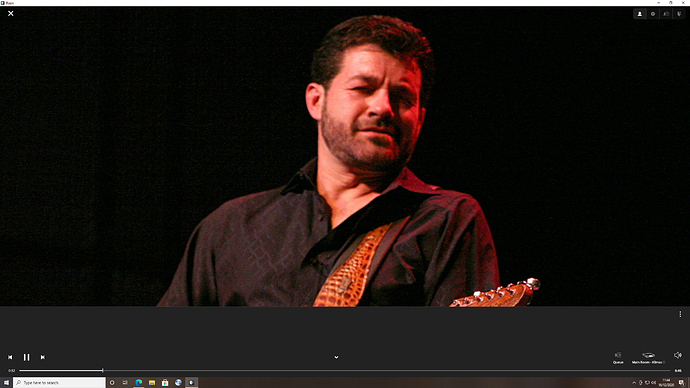 The above photo is indeed a photo of Tab Benoit. 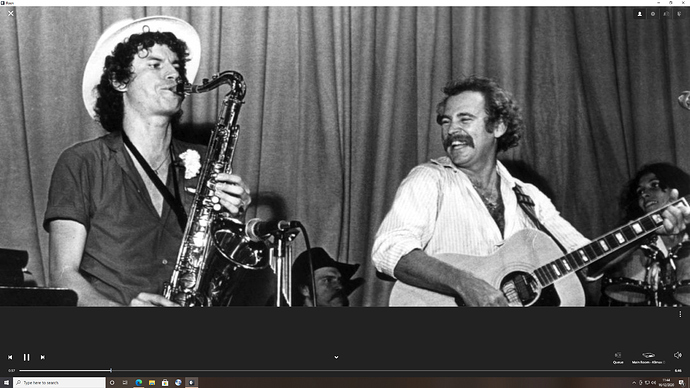 I have no idea of who is in the 2nd photo.

There must be some relationship as Tab is in the playlist

Thanks Ged. It does look as though Jimmy Hall is one of the musicians on this Tab Benoit album.

I certainly don’t have any objection to the display of alternating background photos if both photos are related to the artist/artists on the track - if only the rest of the metadata (album/artist artwork/info) was being displayed.

The problem appears to be more or less what it has been other than the above. The latest track by Roon Radio has displayed no metadata of any sort whatsoever - just a completely blank screen.

So frustrating when I hear a track that I really like and have no easy way of identifying it or adding the album to my Roon Music Library.

I see I chipped in earlier in this thread though, my apologies, I hadn’t read the full thread.
If I were asked I’d say it’s a network issue, roon assembles the data from a patchwork quilt of sources and from the symptoms I am guessing it’s not hitting some sources at all or not in time for radio use. If you limit roon radio to your library I’m guessing it works ok?

I don’t know how much messing about you want to do to get a handle on what is going on and what you have available to do so.
However, if you have a mobile phone that you could use as a hotspot you could temporarily turn your w10 pc into a roon server and see if roon radio works. Then drop the hotspot and attach the pc to your normal network and see what occurs.
I know it’s a faf but it might shed some light.

In the meantime can @support delve into logs please?

I might give this a try, although as you say it’s a bit of a faf.

I have no proof that it’s not a (home) network or ISP DNS problem, but …

My ISP/DNS provider has been constant over the entire period, and the introduction of the problem and subsequent resolution and regression have all coincided exactly with the application of Roon software update releases.

I have encountered (absolutely) no other problems of any sort with my home Network, including 4k video streaming from Netflix and Prime Video, nor with any other aspect of Roon/Tidal streaming. Music streaming has been constantly flawless on all of my Roon endpoints.

Incidentally, I use Cisco 2960 switches (attached to my Sky Q hub router) set to default settings with IGMP snooping by default and certified Blue Jeans 6A ethernet cabling for my home network into my Intel NUC8i5 running Roon Rock.

) or inverting the IGMP snooping.

The problems with Roon networking IMHO are:-

I’ve been hanging around this board far too long and whilst the fact that other services work perfectly well so why shouldn’t roon is a perfectly valid one it has proven to be, unfortunately, a specious one.

Just my two penneth worth

Thanks for your time again - but just one more piece of info related to the latest software release.

I’m pretty sure something in the way Roon Radio obtains metadata for tracks has changed with this latest release. The track currently playing on Roon Radio is from the Reese Wynans (and Friends) album “Sweet Release”.

On this occasion, all metadata (Background photo and artist/album artwork and details) are present and being displayed correctly by Roon Radio: 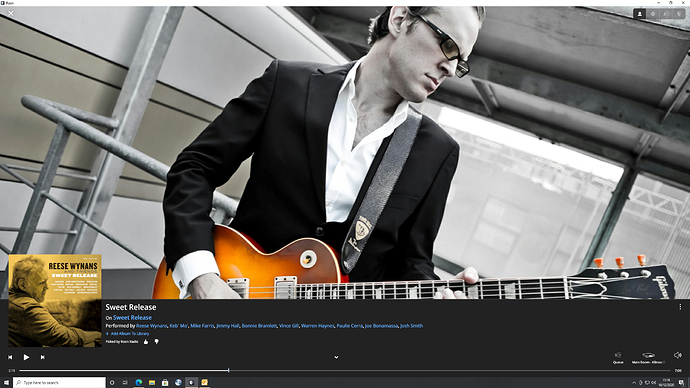 In the screenshot above, Jo Bonamassa is shown in the background photo (he appears as a guest on the album), but Roon Radio alternately displays a rolling 5 or 6 background photos (of other guests appearing on the album such as Keb’ Mo’ and Jimmy Hall) throughout the track.

I have never seen this before, and it possibly means that Roon is now polling for metadata throughout the track, rather than just at the beginning. If this is indeed the case, I would have hoped that it might resolve my particular problem, but unfortunately it has not had that effect.

) or inverting the IGMP snooping.

That may often be the case. However, my Sky Q Hub router has been very well reviewed by many technical review sites, and is an integral part of the very many functions (including multi room and wi-fi extension) provided as part of my Sky provided package.

I have no intention of changing to another router.

In any case, I ran this router for many months before my Roon Radio metadata problem manifested itself for the first time with Roon Software release 1.7.

I live in hope!

Can someone answer a question for me relating to DNS servers and metadata retrieval by Roon?

Why is it the case that obtaining metadata (or not) relating to tracks selected by Roon Radio appears to be more DNS server dependant than is the case with other Roon functions.

Why might this be the case? I would very much appreciate some insight.

Your library of tracks is processed when you installed roon. Roon went out to the metadata providers but if a DNS lookup failed it didn’t matter as all of this is going on in the background. The metadata is patched together from a whole host of providers and the roon servers themselves which are also distributed across at least two cloud providers and possibly on premise roon servers.
When you play roon radio it’s doing all of that again but just based on the individual tracks. But this time if there are DNS errors you notice them as it is happening immediately.

Thanks again @ged_hickman1, and as usual your explanation makes perfect logical sense, although …!

Surely the same scenario should occur when I carry out a Roon Search for an artist, album or track that is not in my music library and that I have never accessed in the past? I do this fairly regularly.

I think the difference is in timing. When you search , you click go and then wait until something happens. You will have noticed that sometimes roon returns super quick and other times you could boil an egg.
Now I’m really speculating but I would imagine that for roon radio there is probably some sort of timer that says
Go…start the clock
now within X milliseconds I need confirmation that the track is available to stream, that the metadata from these 12 sources is available etc
Clock counts down and art isn’t back - cancel
That sort of thing … But that’s all pure imagination