CIn my exploration of the ECM catalog on Tidal — I have lots of ECM but there is lots more — I came across this album, which triggered a lot of memories and links.
https://i.imgur.com/1TO8lBt.png

In my school years, ’60s and ’70s, I was learning about avant-garde jazz, and I tried Don Cherry who spent some time in my native Sweden. I found him difficult. Maybe he was difficult, more likely I couldn’t understand. In any case, I now really like this album.

Cherry had a long and varied career. In the ’50s and ’60s he had played with Ornette Coleman, John Coltrane and Sonny Rollins, and later with Nana Vasconcelos and Colin Walcott, 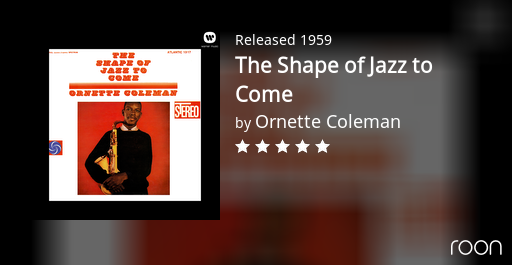 https://i.imgur.com/bUcAp7K.png
…but he also collaborated with Krzysztof Penderecki.

I heard him live in the early days. On the Dona Nostra album, recorded in 1993, there are other artists I heard in the ’70s, such as Okay Temiz, a Turkish drummer who lived in Sweden at the time. Temiz formed an interesting Turkish folk/jazz fusion group called Sevda, with his brother Akay Temiz, Maffy Falay on trumpet and several Swedish guys: I find one Sevda album on Tidal, but for the best of them I will have to dust off my old vinyl. Okay Temiz has lots of stuff on a Tidal, reaching up to 2011.

On this album, Cherry and Temiz are fabulous. And so is Bobo Stenson, well known in these pages, and Anders Jormin on bass, who plays in Stenson’s trio, for example in War Orphans:
https://i.imgur.com/kAd7g4y.png

War Orphans is a tune written by Ornette Coleman, who Don Cherry played with. Charlie Haden’s Liberation Music Orchestra also recorded War Orphans, on an album with Don Cherry and Paul Motian and Dewey Redman, as did Paul Motian, and Jormin with his own band.
https://i.imgur.com/AUhB6Xr.png

Jormin has also worked with Lena Willemark, who I have gushed about in these pages (e.g. here). She performed at the 2017 Nobel Prize gala, in an interesting piece performed on a xylophone and horn made from ice…
https://i.imgur.com/dnWF7gy.png
See also this Tokyo performance.

On a different track, in the ’60s a Swedish artist named Monica Karlsson met a Sierra Leone musician named Ahmadu Jah, and they had a daughter named Neneh. Soon thereafter, Monica married Don Cherry, and the girl took her stepfather’s name. Today, Neneh Cherry is a rapper and hip-hop artist, among many other endeavors. Her 2012 album is my favorite, The Cherry Thing, a collaboration with The Thing, a Norwegian/Swedish experimental jazz trio. 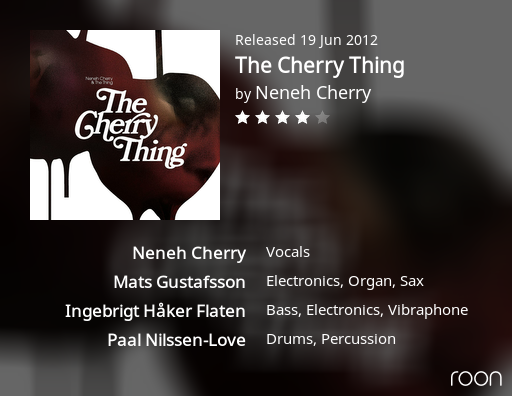 (The Thing took their name from a track on Don Cherry’s 1966 album Where Is Brooklyn?) The Thing’s Mats Gustafsson is a rowdy saxophonist who did this album with the Craig Taborn, who was recently celebrated in The NY Times.
https://i.imgur.com/YYpZxLG.png

And so it goes…

To borrow from another thread I just finished reading, now THIS is what I call a useful review. How about a set of User Review threads linked to albums and artists like this?

Whaddaya say RoonPeople? Something else to do with your spare time, no?

This is great. Love Coleman and Cherry but there’s definitely some unfamiliar stuff I’ll have to check out.

This reminds me I’ve meant to start a separate thread about playlists. Shareable playlists just seem like a obviously useful extension, esp if it were to include Tidal.