Roon Controller is built on top of Microsoft’s Mono version of .NET which runs on MacOS, iOS, and Android, and possibly Linux where the Mono project began. I’d guess there is a bug to run down in the iOS version of Mono. I’ve noted an increase in crashes recently but not annoyingly so.

Important to note that other than the interface to the OS services, all code is shared across all controller platforms. Platform differences are confined to the Mono implementation on that platform. Microsoft has changed its stripes and being platform agnostic for application development is a strong goal. They will sort it eventually.

I concur with Nealsal’s sentiments… Relaunching Roon on my iPad or iPhone is so frequently required, it’s just something I accept as part of the software! It’s a sorry state to be in when one accept failure so readily. Sigh.

For what it’s worth, I feel the same about the search on Roon. It’s so pitifully awful that I can’t even get annoyed about it any more. I now search for something on google to get the exact name and then copy-paste that into Roon. It might find it, it might not. I find it staggering that the search in my own library (for which Roon could chug away on the background to categorise etc) is so tragically bad too.

I realise I’ve gone off topic here. Please don’t be annoyed with me.

ios remote has always done this. i set mine up t0 never go to sleep and just leave it on running Roon Remote when using. Any going away from the Roon app seem to cause it to restart, bringing up your album you were playihg and the queue but loseing any other status.

I’m going to knock on wood because I don’t think my iOS app on my iPad has ever misbehaved in any way. I hope it doesn’t start misbehaving now! So the question in my mind is why does yours crash and not mine?

This will go off topic now, but I have a maddening issue with Roon unable to start playing music. I choose my music and press play and ….nothing… I forget the exact error message, something about this will take a minute. Well it doesn’t ever correct itself, and I’ve come to realize it means I must restart my Roon Nucleus. So I unplug it, wait at least ten seconds and plug the power back in, and I restart my music and it begins playing. This happens FREQUENTLY. And yes, it is also maddening,

I think there are a lot of stability issues at the moment on Roon. My iPad crashes all the time, the frame rate issue on iOS makes it a non starter for me anyway.

Because of this I started using my android phone to control it, on this there is crashing when using the album filter. If I use another app and come back to Roon it gets stuck on the now playing screen unless I tap queue and then I can get rid of it. Adding albums for some reason takes a while, often if i add tracks as im listening (so they show in my streaming service as tracks) and then add the album, it will break it out into two. The ones i added manually as an album then the rest as another. I have to merge them together to fix it, something i cant even do on mobile. Playback issues are just rampant and by this I mean the annoying kind, pauses in between tracks, buffering takes too long etc. I have a gigabit connection, it should not be this frustrating.

General stability and performance for me is absolutely horrendous when you take into account both iOS and android are having issues. The only platform that works for me is desktop and that isn’t where I want to use it.

Roon really need to take these issues seriously, I see it all over the forum, its been going on for years. I think its been a low priority because they are intermittent issues (some are at least) and they don’t happen to everyone. Here’s the thing though, Roon is the only app on any device that I can’t trust to just do its basic function, play music.

I have never seen any major performance issues go unaddressed from other platforms for more than a few weeks (if that).

The iPad is supposedly your lead platform (from all the marketing), how the hell is it such an inconsistent experience ?

The iPad is supposedly your lead platform (from all the marketing), how the hell is it such an inconsistent experience ?

Is the iPad the lead platform? it may be recommended but there are very many Android users out there & some of them are also having problems.
I won’t try to defend Roon for the problems that persist for some users & the apparent lack of attention from the support team. However, these problems don’t appear to be affecting the majority of users and frequently issues can be resolved by basic precautions.
In my case my iPad crashed a few times during a 24 hour period, I was getting really “P’d off” with it but when I regained some composure I shut the iPad down & restarted, since then no further problems!

It’s a fact that some basic housekeeping by the end user and some basic network maintenance can also alleviate many problems that are reported in this community.

As has been mentioned elsewhere Roon attempt to maintain functionality across (imho) too many systems but imagine the outcry if they suddenly restricted the range of supported devices.

From my experience, problems that plagued me for months ultimately proved to be due to local network issues. Having spent some time and effort sorting my network long standing issues have been resolved.

I think you are drastically overestimating actions end users can do to elivieate the problems that we are seeing.

I have a gigabit connection with a nighthawk router. Core is wired as is my main endpoint. There is no network issue here and we really, really need to get away from this clutch.

The general stability has nothing to do with the network, we are talking bugs here, this isn’t something that can be fixed with better networking as its in the software itself. All basic precautions have been taken and no amount of messing around is going to fix issues that are baked into the software itself.

As I mentioned, I’m on android too and I still see rampant issues, not crashing but infuriating bugs nonetheless. As OP stated in the post, if it works for you great but it doesn’t help all the people that are seeing these issues to know that your experience is flawless.

No one is saying it doesn’t work well for some people, we are saying for us its a terrible experience.

I understand and sympathize with all those affected like yourself but…

When there are numerous members with exactly the same gear who are NOT affected I think you would have to agree that this makes it extremely difficult for anyone to nail down the exact causes for those who are affected.

Not defending anybody here or taking any sides but just trying to put some reasonable perspective on it as I see it.
Nothing more or less…

I agree that it has nothing to do with gear. Its a software issue.

I’m not suggesting its easy, if it was Roon would have already fixed it.

That being said, these issues have been reported for years and combine it with other jank picked up along the way, its pretty unbearable.

For these IOS devices having issues, I’m curious how much memory/storage they have on board.

I’ve read posts from Danny that states running out of memory will cause Roon to crash. Pretty sure that was referring to the core machines only but curious if that effects remotes as well.

I have read similar suggestions.

I set my dad up with Roon the other week, he never got into streaming music so thought I’d get it set up ready for me to throw all of his ripped CDs in there.

Clean roon, zero files and no albums or tracks from Qobuz. First thing that happened when I showed him the interface ? The iPad app crashed.

That was the latest regular iPad.

I’ve also had issues with my IPAD Pro 12.9. Don’t know if this is considered a crash but Roon on the IPAD locked up tight repeatedly during a power outage when the internet provider went down. All other remotes worked fine.

I don’t agree with you.

Actually, I have also the same problems with my ipad pro and my iphone.

In my opinion, not complaining here does not mean that other users do not have these problems.

For example, I don’t think there’s a single iPad owner who doesn’t have the issue “Remote crashes every single time when returning to it after using other apps.”

It’s just that not everyone is equally sensitive to these kinds of issues.

Perhaps this is also related to age.

The speed of my first modem I bought in 1995 was 14,400 kbps. Back then we would have waited a few minutes for a web page to open.

That’s why these types of issues just seem tolerable to me and to some others they are not acceptable.

Btw, of course, I would also like the application to run smoothly.

For example, I don’t think there’s a single iPad owner who doesn’t have the issue “Remote crashes every single time when returning to it after using other apps.”

Possibly I’m that “single iPad owner” then, although I sort of doubt it but no problem.

It was my spin on the perspective and I would not have made the statement if I myself did not fall into the category of having similar gear but with zero problems.
Obviously a lot do and hopefully Roon will make headway on the issues soon.

Roon doesn’t crash on my iPad (7th gen) after using another app.

Frankly, none of us, but perhaps Roon, knows the true extent of these issues. That said, there are certainly enough reports to indicate some kind of problem and I hope Roon can figure it out.

for the record I have 2 ipads (pro 11" 1st Gen) and several iphones (X,12pm, 13PM) in the house…none crash anywhere near even one or twice a month if even that with roon.

Can we swap out first gen iPad pro 11" please

There’s another issue I found. The “Tag” function on iPad, when I sleep my iPad after using Roon, then switch it on again later. The “My Tag” page will not show any albums (1.jpg) until I select the tag list explicitly. (2.jpg) 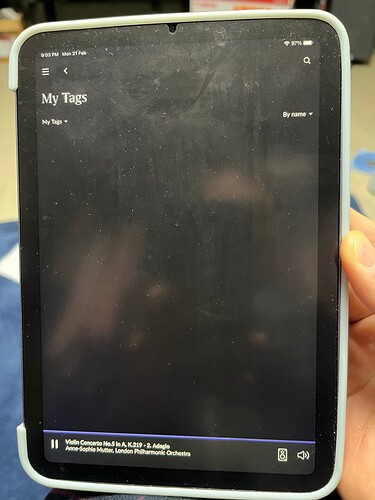 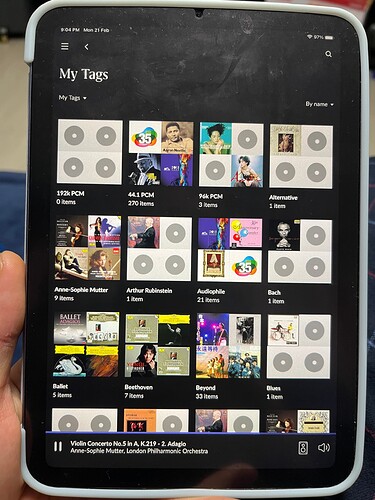 I have the same issue since two weeks. Ipad pro 12,9, latest update….