Wow how is this possible! This is a major release with no review at all
Also it’s labeled wrongly as rock… 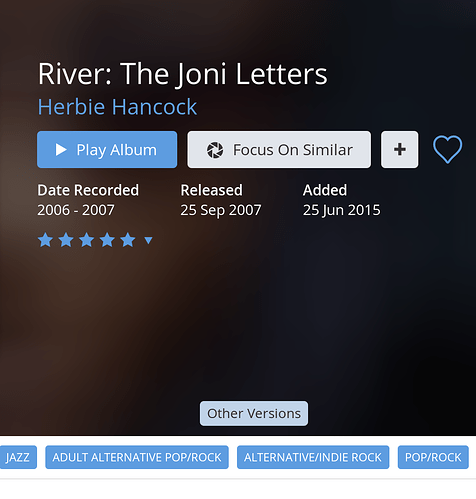 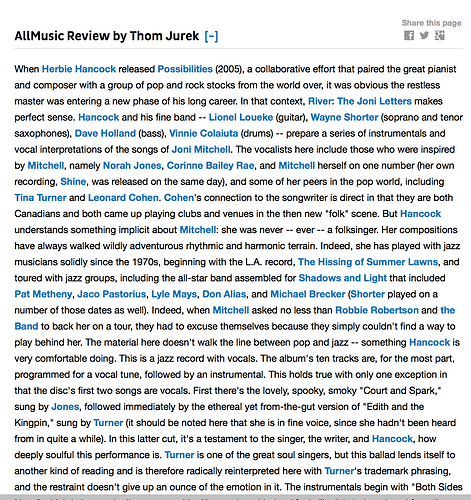 I am 95% sure I used to have a review for this album…I know it well.

I’ve entered a ticket. @jeremiah will look into it and find out what happened.

I just checked and also have no review.

Any news on this?

Metadata and genre classification is tricky. “crossover” jazz can lead to wrong conclusions. I wonder if the algorithms can understand that these are jazz covers of pop songs.

We did the initial investigation and understand the root cause of the problem, but it’s not a trivial thing to fix.

Rovi structured the data for this album in a way that we weren’t expecting, and the review isn’t in the place in the data model where we are looking for it. We need to build some machinery to go find it for cases like this. This machinery is something that we have never had, but it’s likely that a recent change to the data on their end exposed the problem.

Now that 1.2 is out, metadata stuff is the focus of our attention. This has already begun–some simpler/lower-risk fixes rolled out last week, and we’ve improved performance and reliability of the metadata services quite a bit over the past 10 days, too.

OK thanks for the explanation Brian. Hopefully you can fix it soon.
Now that I have your attention there’s an issue with Björks latest album as well