I have succesfully installed ROCK on my AsRock J1900. I post this in the spirit of it “might work”.
I have a desktop system.
1.5 years ago I assembled my NAA for Roon (Win10 Pro, 16GB, Sammy 850 SATA SSD 250GB, Mini ITX Antec, fanless!). I loaded Roon and used Remote Desktop to play my music. After ROON 1.3 was released, it could no longer handle the graphics. So I loaded Roon server and used Roon as a remote from my main computer. I played music via remote desktop Win10 Pro, AO, Fidelizier, linear PS, optical isolation, and Uptone Regen. Sounded really great.
Last weekend, I installed ROCK on this Atom system with no problems. I have 2000 albums and 30000 tracks announced on my Roon header. A small system? My music resides on a remote NAS via ethernet, with about 600 ripped CD’s to flac. I also listen to Tidal. And alot of black pizza.
This ROCK installation is not recommended or supported. YMMV. But it sure sounds great, better than before my ROCK installation. My take away from putting ROCK on my system is that a I3 NUC would be fine for my system, and sound great. Thank you ROON Team. -Rik 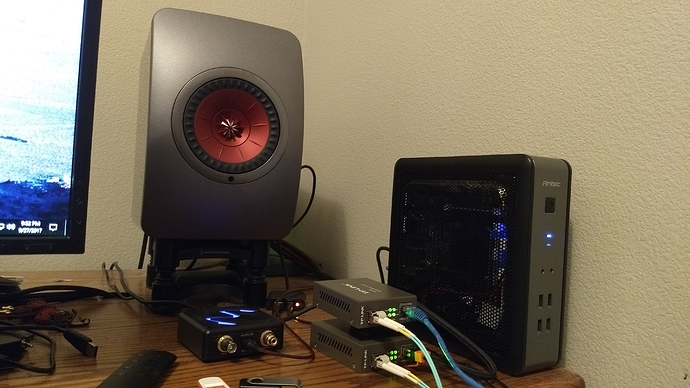 There is a MOCK thread to show the various unsupported hardware we have managed to put ROCK on to. I have it on a single core Atom NUC for endpoint duties only and it works well in that role.

Sorry, I didn’t know about that thread. I will delete my post. Thanks for letting me know. -Rik

There is no need to delete, I am sure the mods can merge it!

One should note that with such a low end processor (atom) that the chances of any upsampling will be very limited, likewise many other DSP related options.

He has acknowledged that ideally an i3 NUC would be best for his circumstances. That said it is worth exploring the breadth of hardware that ROCK will run on.

They are used to isolate the ethernet noise from entering the ROCK NAA, which is my USB endpoint before the KEF speakers.

I did not know, thanks. I would like to have that switch. It would save good money on SFP’s. With one of those, I could use the optical input on a ClearFog as a Roon endpoint all though my house.