I have just recently added an External USB drive to my NUC/ROCK set up.

Before I ask the question please note that I restart my NUC daily if not twice daily at the moment, due to local power outages.

I renamed it to NUC_USB but it was re-renamed , presumably on startup to the same format

Mike I recently did the same thing for my Roon backups. It also renamed itself upon reboot.
It looks like it is taking the name from the USB device itself.
I gave up in the end as no one sees it and it consistently backs up perfectly well.

You are probably right , I guess I do the same … 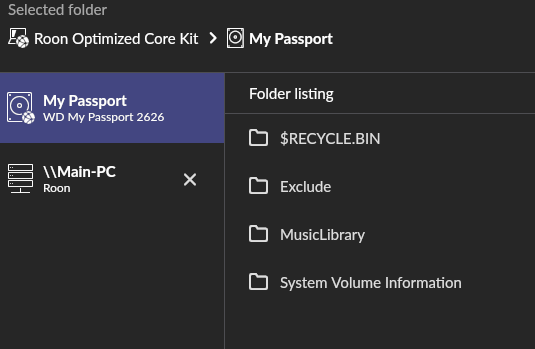 It seems to be clagging up one of my tools , Tag & Rename as it trying to read the super long path .

Have tried to change “T7_Samsung_PSSD…” to just T7. But after every reboot it turns back to the long name. In Roon it is fine - just “T7”.

According to Danny, it was a deliberate choice to use the Volume name.

If I could make that folder readonly, I would. Anyway, you should not do that, and no, there is no way to change that path. The lengthy name is not really meant to be used/seen much and it serves a very important purpose for disk mounting in Roon.

Thanks Geoff I had sort of thought that when I gave up, after trying several things and no options in the web for ROCK.

As long as I get my backups I am happy, but it is interesting that a few of us have come across this in the same week or two and generally been Roon users for quite some time.

Thanks Geoff , now at least i Know