I used to have a Roon Core directly connected to an exasound dac on a mac mini with v1.1. Now I have the core on a linux box, the dac is still connected to the mac mini which is now a Roon Bridge.

Is it any better? Yes it is, but that might be just because I’ve upgraded to v1.2 and can now use the exasound asio drivers as opposed to Apple’s core audio.

Surely you would get the same effect, but more so, by simply using a dedicated LAN endpoint rather than having a.n.other full-sized computer be the endpoint.

What a great and substantial software update. You must have been working your socks off. I wasn’t sure about committing to Roon but your man persuaded me to take the plunge as the new update would answer many of my queries. So glad I did. I’m now filling my Internet radio box with some great sounding URLs, including my beloved BBC Radio 3. You are creating something very special.
Well done!!

What are my options for a dedicated LAN endpoint?

A post was split to a new topic: No outputs on Windows 10 Remote

Here I am again with a simmple question: what did you use for this configuration?
MacMini’s, Raspberry Pi (3?), I have two Mini’s so I can try it with them.
How did you connect them?

The music files are stored on a synology NAS.

I’m going to try that tomorrow when I’m free.
Did you connect the two computers with usb or with ethernet?

"It’s also a long-running service that needs to do networking (discovery, connection mgmt) in the background–which isn’t totally in line with the limitations Microsoft put in their Windows App stuff either.

Annoying response, right? These guys with their locked down platforms are really ruining all of the fun…we’d love to support it if it were tractable."

I find this explanation lacking. Every single streaming service’s iOS app manages to play in the background just fine. How can it be Apple’s fault and not yours, if Roon can’t?

Besides that, congrats on 1.2! Looks like a great release.

I find this explanation lacking. Every single streaming service’s iOS app manages to play in the background just fine. How can it be Apple’s fault and not yours, if Roon can’t?

Background playback isn’t the issue. I explained it here.

Just when I was getting tired of a daily pilgrimage over to the Community looking for a new release - you guys go and release this! And it co-incided to the hour with my Sonicore Orbiter being released from Customs and getting here.

So all in all, a happy day for my hi-fi. 1.2 went where I wanted to go with a few surprises too. iPhone support means not only have I got a spared Macbook Pro that has been set free by a Roon Ready SE, I don’t have to use the big iPad Pro if it’s not convenient.

Outside the clamour of cries for what’s next, what’s missing and the offence caused at daring to finger Apple - I just wanted to say that Roon continues to enthral me and I remain daily grateful for the work you do, the product and service you provide. It gives me endless hours of joy - it gives me back a taste and passion for music that I thought had been destroyed in this age.

One of the more interesting things we are thinking about is running an SSD off of one of the USB3 ports for Roon’s database–this is really the biggest remaining holdup for NAS’s–the storage performance of the RAID array isn’t great compared to an SSD. Things are changing now that 64-120GB SSDs are available in the $30-40 range and many of these NAS’s now have USB3 ports…

FWIW, I (pretty easily) installed RoonServer on my CentOS and Avoton c2550-based DIY NAS last night, and on initial evaluation seems to run well enough with my pretty small library.

But I may look into this idea of moving the data storage folder off the HDD array and onto an external SSD.

Really impressed with 1.2, BTW, overall. The phone apps were a nice surprise.

Great release, RoonBridge on RPi3 is working like a charm, the iphone app is gorgeous, keep up the good work !

The two computers are connected via wifi. The macbook pro is connected to the dac via usb.

A post was merged into an existing topic: iOS Backup function?

What I like about Roon is the little things. For example, I just discovered yesterday that the Audio Zones popup panel has working play/pause buttons on all the active zones: 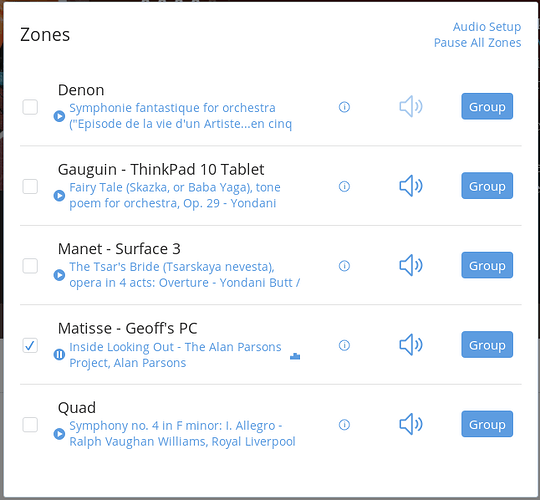 And the new Group feature with 1.2 is terrific…

What does “more configuration options for buffer sizes” mean?

Also if I try to edit a track, I just get a blank dialog.

I used the new method of combining Multi-CD sets into one. First one I tried I’d rather the Disk 1 and 2 be reversed, because one disk is just a bonus one. Can I do that?

But 1.2 is truly amazing! I’m new to Roon, and what an exciting time to join in!

What does “more configuration options for buffer sizes” mean?

The Roon Knowledge Base is a good source of information.
I just did a search in there for “buffer size options” which found a hit… Check it out.

[quote=“Stephen_Dawson, post:151, topic:9463”]
Also if I try to edit a track, I just get a blank dialog.
[/quote]That’s a bug that somehow crept into the last build. Alpha testers hang head in shame_

The Roon devs are aware, expect it to be rectified early next week.

I used the new method of combining Multi-CD sets into one. First one I tried I’d rather the Disk 1 and 2 be reversed, because one disk is just a bonus one.

I’d start by checking / setting the disk numbers tags within the files themselves. Then getting Roon to rescan the albums.