This thread is for general comments and feedback regarding Roon 1.2. If you have a Support issue requiring assistance please open a thread in the Support section.

Now that the devs are sitting on the back porch, sipping whisky and whittling …

Thanks guys. There’s a lot of stuff in this release that really colours in the sketch of Roon’s potential that led us to subscribe. A lot of hard work on your part which will forever change not just Roon, but computer audio generally.

Danny - I just have to say that I am beside myself with excitement but away from my rig at work for HOURS ! I think I may have to resign…

Thanks Roon for fulfilling my Top 3

Only complaint so far. I will be at Axpona all weekend and won’t get the chance to muck around with Roon.

This means audio on an iPad will be possible? And iPhone too?

The description above doesn’t say so, but I recall having seen it mentioned?

Since Roon is built on .net, we use Xamarin tools to target iOS and Android. Their garbage collector doesn’t play well in the same process with CoreAudio because it pauses the entire universe, including unmanaged audio handling components when it runs, and that doesn’t sound very good.

Our usual solution is to move audio handling out of process–which we do on all of the other platforms. Unfortunately, Apple doesn’t allow us to do the same.

). They seem to be on track to clear it in the next few months. At that point, we’ll be able to see where things have landed.

Thank you for the release!

Roon Bridge is now available for OSX, Windows, and Linux, letting you turn all sorts of devices into full-fledged, remote-controllable Roon zones.

What is the difference between the RoonSpeakers and the RoonBridge on PCs? does this mean all the PCs now have RoonSpeakers?

What is the difference between the RoonSpeakers and the RoonBridge on PCs?

RoonSpeakers was the original name for RoonBridge. You’re looking at it

Zones can be set to private now, but it’s just an optional setting. You can do everything you before, but these zones can now be controlled remotely, or grouped with other zones. More info here

does this mean all the PCs now have RoonSpeakers?

Yes, all Roon zones now run on RAAT, whether you’re running a Core, or a Remote, or just Roon Bridge, or a Roon Ready device.
.

No way to “Focus” on MQA files.

Still Available. Under each enabled Audio, in Settings there is a check box for Private or Not. It is checked Private by default for Tablets and Phones (Androids at the moment).

RoonSpeakers has morphed into the new RoonBridge. RoonBridge is part of every Roon install but is also able to be installed separately.

It’s there inside of Focus->Format, but you need to be running a 1.2 version of the remote to see it: 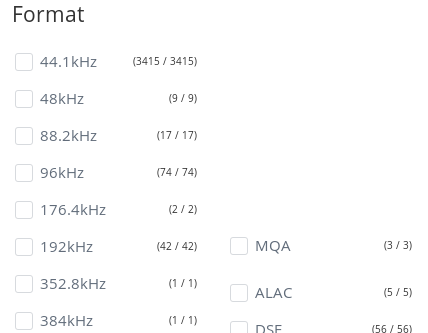 He beat me too…I deleted my draft

Ah, my booboo. I thought I had updated all remotes. Thanks!

I like how speedy it is on my OSX machines, can’t wait for that same performance boost on my iPad. Now we just have to wait a half century for Apple to review it. Uggh!

Update to 1.2 went fine with this config:
HQP/RoonServer on Windows10 into
Auralic Vega
Mac Roon client updated to 1.2

Thank you for reply.

Regarding Linux installation, I want Raspberry PI disk image file (.img). This is easier to install to Raspberry PI. Is this possible?

We are working on a disk image, but it isn’t quite ready yet.

In the mean time, we’ve had good luck with the Raspbian Jessie Lite image and our “easy installer” scripts. That combination should work without needing to do anything too tricky.

I should try building one of those just to mess around with… Hmmm.

I encountered one problem during the upgrade: I have the client running on a laptop and Roon Server running on a headless Windows 10 PC. Running from the laptop, the upgrade appeared to hang. When I remoted into the PC I saw that Windows had popped up a firewall permissions dialog, once I clicked OK the upgrade completed with no problems.

Thanks for mentioning that. I expect you won’t be the only one.

This is the result of moving our audio playback out to a separate process–a big win in terms of flexibility, stability, and better isolation for the audio bits, but a bummer for firewall configuration.