Are you able to drag and drop the files onto the Roon app?

I had already pointed Roon to a master folder containing all my music (not the default music folder).

Do you have in Settings > General > Show Hidden Albums set to Yes?

If not, I’m thinking that two of the versions are considered duplicates and a third is separate. Do you see an Other Versions button on either/both the albums? If you click it, does it show the missing version?

The easiest test is to set Show Hidden Albums to Yes and see if it appears.

Revealing hidden albums uncovered the Mobile Fidelity version. Thanks for your help.

Hello again. I am on Roon 1.6, and it can’t find the Mobile Fidelity of the Cars album “Heartbeat City.” Instead, it finds the expanded version, which has extra tracks. I have checked the option to show hidden albums, but the Mobile Fidelity version still doesn’t appear.

Yet, when I searched for albums by artist, the Mobile Fidelity version appears.

Is there a way to get Roon to find the Mobile Fidelity version from general searches for the album? I have that version, along with the expanded version, in a Cars subfolder within the general music folder that Roon monitors. Thanks.

I would look to see if Roon considers it a “duplicate”, and then if so, go to the the “duplicate” album and tell Roon it is not a duplicate.

Do you use Tidal or Qobuz, or, do you just use Roon with your local library?

Hello again. I was recently having the same problems with Frank Sinatra’s album “No One Cares.” Roon found an old version added to my library in 2017 but couldn’t find the Mobile Fidelity version added last year. I then set Show Hidden Albums to Yes, and Roon picked up the Mobile Fidelity version but only when searching by artist. When I search by “Frank Sinatra,” it lists each version of the album separately. Yet, when I then search by album, it still finds only the old version.

So it seems that, even with Show Hidden Albums enabled, Roon does not pick up duplicates when searching by album. Is there a way to fix that issue?

Also, now that searching by artist reveals the different versions, is there a way to consolidate the album’s appearance into a single album and to let me choose which version I want to serve as the default to play?

FAQ: I have multiple versions of the same album, but I only see one album cover. Where are the other versions?

Thank you, but Roon is not showing the album as multiple versions. Instead, each version appears as a separate album but only when searching by artist. When I search by album, Roon finds only the old version.

Thank you, but Roon is not showing the album as multiple versions.

Please share a screenshot of the album detail page that confirms your claim.

Instead, each version appears as a separate album but only when searching by artist. When I search by album, Roon finds only the old version.

You contradict yourself here.

is there a way to consolidate the album’s appearance into a single album and to let me choose which version I want to serve as the default to play?

Please read the guide I linked above and follow the directions given therein.

Hi. I am not contradicting myself. Let me explain.

After I reenabled the Show Hidden Albums feature, Roon (1) found all versions when searching by artist, but it listed each album separately (rather than in the Versions dialog), and (2) found only the old version (a local copy) when searching by album.

I did read the linked article–again, thanks for posting it–but, since the Versions dialog does not show the different versions (they appeared only when I searched by artist and only in the search-by-artist dialog), I can’t consolidate the versions under the Versions dialog.

I have posted screenshots reflecting the current state. Since now both the artist search and the album search fail to uncover the new (Mobile Fidelity) version, the screenshots do not reflect that version.

So there seems to be a bug. Intermittently, Roon finds multiple versions of that album, but, when it does, those versions appear as separate albums rather than under the versions dialog, which theoretically allows the user to choose the preferred version.

The first screenshot shows an album search, revealing one instance of No One Cares.

The second screenshot reflects the enabling of Show Hidden Tracks and Albums.

The third shows Roon finding only one library version–the old one–plus one Qobuz version. Thus, Roon is once again not finding the Mobile Fidelity version.

Roon automatically detects when you have multiple copies of an album in your library.

Your screenshot shows that you have only one (1) version of that album in your library (and another version exists on Qobuz). What do you expect here? Add the Qobuz or another local (file) version to your library first.

Roon (1) found all versions when searching by artist , but it listed each album separately (rather than in the Versions dialog)

Search results ≠ the album detail page in your library

After I reenabled the Show Hidden Albums feature

This disables the versions tab AFAIK.

Since now both the artist search and the album search fail to uncover the new (Mobile Fidelity) version, the screenshots do not reflect that version.

No comments or help possible for things that can’t be shown.

My point is that Roon’s search results don’t reflect the reality of my local library, which contains the Mobile Fidelity version of that album. I have no interest in the Qobuz version. I thought I had to enable Show Hidden Albums to unveil all (actual library plus Qobuz, etc.) versions of the album. When I reenabled it, Roon initially found the Mobile Fidelity version. I can’t help it if the intermittency of the bug prevents me from capturing a screenshot of the multiple versions that showed up a few hours ago.

As already said (actually written), search results are independent from your library (unless you click on a search result which might lead to the album in your library). The search might dig up and display all kind of what Roon thinks is related to your search term. As the mobile version is restricted in many ways, it might be also a good idea to use a full featured (or at least more complete) client than the mobile (phone, portrait mode) version for testing things out.

I used the Mac version of Roon, flipped back and forth between revealing and hiding hidden tracks and albums, and searched for No One Cares by album. Again, it found only the old local version.

I then searched by artist, and this time Roon found the multiple versions, as you can see in the linked screenshot. I then clicked on the Mobile Fidelity version. As the second screenshot shows, Roon has marked that version as “Duplicate.” I don’t know whether that marking has anything to do with Roon’s failure to find that version in an album search even when I have chosen to reveal hidden albums. Maybe Roon distinguishes between hidden and duplicate albums. If it does, I am not sure how to make it include the duplicates in its album search. Also, before this latest search, Roon couldn’t find this duplicate even by artist search, except that one time a few hours ago.

Ideally, for any album where I have a duplicate, I would like to tell Roon which to prefer. The Versions tab, of course, has a feature for selecting a preferred album. But it hasn’t been working for this album. 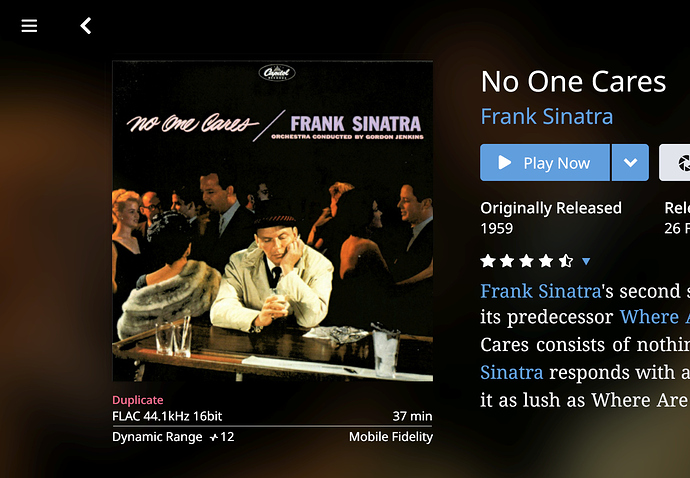 A post was split to a new topic: Losing some albums

I use Roon with both Tidal and Qobuz enabled and Roon has repeatedly failed to find albums or artists that appear on Tidal and Qobuz. I recently searched for The Who on Roon to no avail but had no problems going directly to the Tidal and Qobuz apps.