What I wonder, though, is whether the firmware/filter issue with MQA isn’t making the non-MQA content on the S2 sound comparatively worse.

The MQA issue with the S2 DAC only appears when it’s doing the full MQA decode. If you have Roon (or Audirvana or Tidal Desktop App) do the first unfold, you won’t have any issues with MQA with the DAC. You’ll see MQB on the DACs screen when it’s in rendering mode.

I didn’t have any issues with non-MQA stuff. In fact it sounded great with Roon up-sampling everything to DSD512 and PCM768kHz, for me.

I had, in fact, flipped this option off after posting, and, while the situation was greatly improved, my collection still required a great deal of manual culling in a lot of these cases.

Fortunately, the “process” of combining these is quite easy now! I can only hope “tagging” receives a similar amount of TLC in the future.

2 posts were merged into an existing topic: 1.5 Database update not completing [Resolved after 5.5 hours]

Perhaps Roon should take a leaf out of Windows book and do a backup before an update is allowed to start, or at least check there has been a recent one done?

My impressions of 1.5: generally peppier performance. Albums load quicker, TIDAL more responsive, and newly set endpoint defaults work without lag. MQA and Versions are non-events for me (thus far) but I was impressed with how well thought-out both seemed to be.

My priorities remain “on the roadmap”.

Enjoying Roon MQA decoding I think it sounds really terrific and a step up on my two main systems and I really mean that!

Being able to continue with Roon DSP as well - chapeau! This being one of the ‘doing things differently’ I recall Danny mentioning previously.

Improved album version control - big thumbs up from me.

I noticed that after the update I have 1 album less from the total album count. Is there any way to find out what happened or if this album is missing (or was added wrong before…)?

I’m wondering if the “missing” album might now be regarded as a duplicate and not counted.

Roon guys — I skipped the accolades and went straight to the questions, because I think “fantastic release” is on by default. But that’s not fair, it is indeed a fantastic release, more so than any fair expectation.

The device default settings is a really nice thing.
Not just for first time users, or new hardware installs — I have gone back over my existing devices and set each of them to default.
Simplicity!

Roon didn’t recognise the S2 DAC at first. I was able to go in and select it manually of course, so no big problem. But since it’s Roon Tested I thought it would be automatic? Not a big deal, just feedback.

In order to have Roon do the 1st unfold and THEN do Roon DSD512 up-sampling, I needed to set MQA compatibility for the S2 DAC to ‘No MQA support’. With any of the other 3 MQA compatibility options, Roon would only do the 1st unfold to 96kHz and output 96kHz to the S2 DAC, even with Roon DSP with DSD512 up-sampling enabled the entire time. Is this normal? This is the only way to get Roon Core decoding to 96khz -> Roon DSP? ‘Enable MQA Core Decorder’ is obviously enabled at all times.

Upsampling is a special case–it’s impossible preserve MQA rendering instructions across a sample rate conversion–they have meaning only with respect to the decoded 88.2/96kHz stream. So Roon automatically bypasses the upsampler in cases where it would disturb the DAC’s ability to render.

Other DSP (room correction, eq, etc) is left in the signal path in all 4 of the configurations, since it isn’t fundamentally incompatible with MQA Rendering.

In other words, if you would rather use Roon’s SRC than the MQA rendering stuff in the DAC, the setting you found is the one that you want.

I think my Project S2 also took a manual selection to ID.

I think my Project S2 also took a manual selection to ID.

strange, i did not have this problem with mine

mine is sat behind a rPi with RoonBridge so not sure if that is a factor.

mine is behind RPI3 + RoPieee at the moment

It should, if you set the setting in Roon for your DAC to Render only (since your DAC does not decode MQA, Roon will)

This was mentioned previously, but i didn’t see any feedback…
A lot of music on Tidal is seemingly MQA content Authenticated at 44.1khz, but it seems Roon ”upsample” this to the 88.2Khz Decoded state: 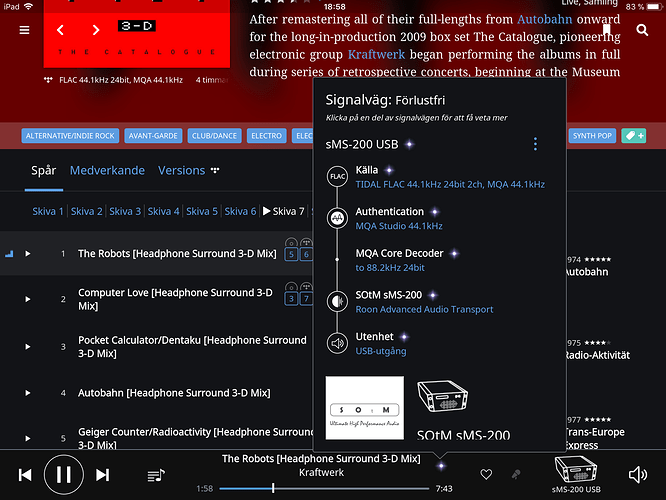