4 posts were split to a new topic: Track Format on Now Playing Screen

There’s a z-index issue on the artist screen when you scroll down to the different albums on which an artist appears. Note the chevron button that points left and right to scroll is appearing underneath the panel instead of above it. This is on iPad. 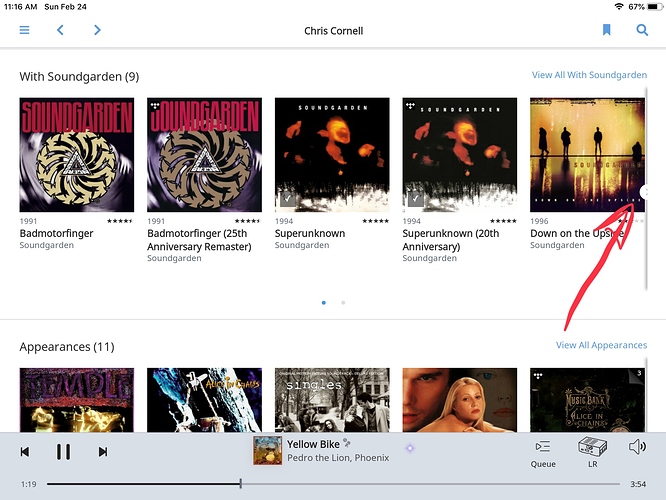 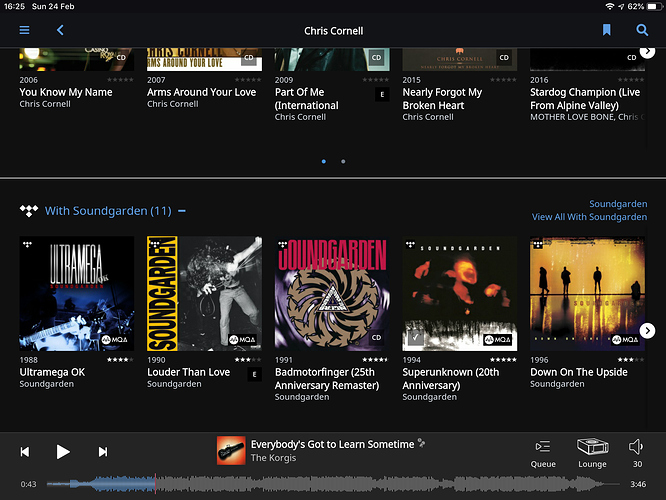 Thanks @ged_hickman1. Switched to the dark theme as you show in your screenshot and it looks correct there. Looks like it’s just an issue on the light theme.

You’re not doing it right 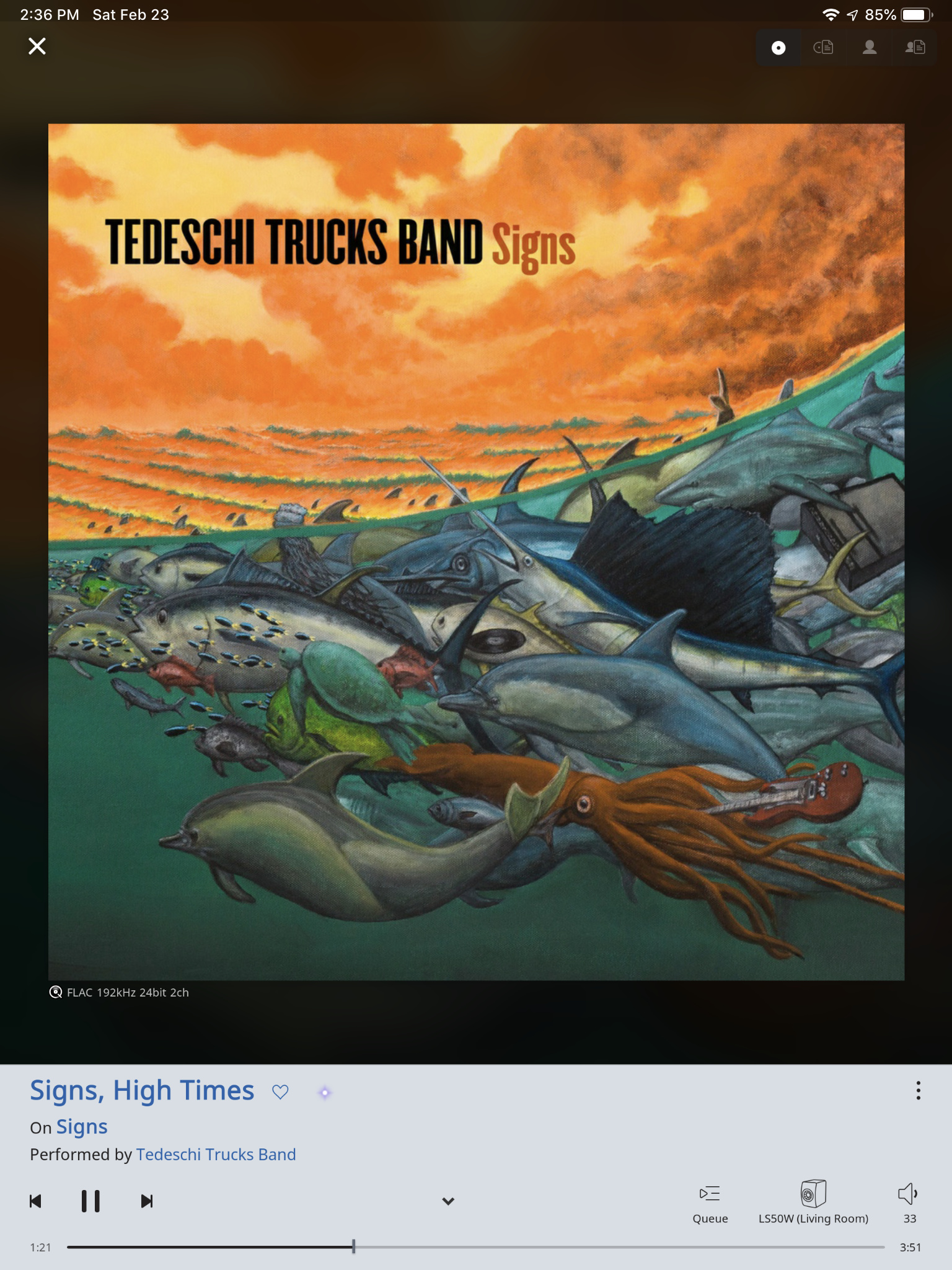 Thank you from this lifetime subscriber.

Wow, you are correct. On an iPad Pro the Now Playing view with album art is awesome. I had my iPad pro sitting on a stand on its side because it is easier to plug it in for recharging, so I’d never thought about simply turning it vertically for Roon. It will be sitting in the vertical orientation from now on using Now Playing with album art.

So you have your choice depending on whether you want to look at photos in the Now Playing screen (iPad Pro horizontally) or the album covers (iPad Pro vertically).

The album art is still a bit small for my taste. It seems it could start higher on the screen and be a little larger whilst still maintaining a reasonable border with the top.

Looking at the incredible vertical orientation on the iPad Pro again prompts me to hope for a slightly larger album art for the horizontal orientation on a television in a main room. Without reducing the size of the fonts on the bottom, which are now perfect in a home theater, and for reading the artist, album and song from the other side of the room.

Too bad that orientation isn’t available on smaller iPads.

Agreed, as I also own an older iPad with the approximately 10" diagonal screen. Apps like the NY Times work on it in a vertical orientation, but not Roon.

With that said, I agree with Pscreed that this new release is a great improvement and major step forward for Roon.

A post was split to a new topic: B401 Unable to add artist image

9 posts were split to a new topic: Slow Searches with 1.6

Is Portrait mode only supported on the 12.9” iPad?

Or on Android tablets. Since Roon is implementing portrait on iOS, perhaps we will see the same on Android. The album art is really nice in that view. The tablet is easier to handle and rest on my thigh in portrait, too!

Back from holiday and just updated to the latest build. Back on track for sure with the UI. Also signed up for Qobuz and deleted Tidal for good. 100% of the 1700 plus albums transferred over with the help of Soundiiz. To me, the sound is the slightest bit fuller, but more importantly no longer have to suffer through viewing every third rate Trap album in the what’s new screen, and no MQA.

Some minor niggles and requests:

ability to have a small thumbnail of the artist on the Now Playing screen when album art is chosen as priority,

ability to skip the que and start Roon Radio from the NP screen,

ability to see what’s next on the NP screen,

ability to open the Qobuz pdf from the NP screen.

Overall navigation still a bit awkward, but that’s always been the case. Still easier to delete my bank account than it is to delete a streaming title, but hopefully that will change as well in the future. Thanks Roon for listening to feedback and getting us a better looking UI back.

I don’t know if this is a bug as it doesn’t always happen although it does more often than not:
I scroll through my library and pick a record from those starting with “F”, let’s say. Once it’s finished I click the back button and instead of the library list showing at the point at which I selected the previous record, it jumps back to the top of “A” so I have to scroll all the way through to “F” again. When I first started using Roon, this didn’t happen and the library list would reappear from where you left off.

I like the new updated “Now Playing” very much.
Also, I like the icons for the different pages for album/artist information when available.

I do not miss the swiping of this information - now I can go directly to the relevant information.

This happens to me quite a bit as well and has been that way since I started using Roon a couple years ago.

Compliments to the Roon team on the vastly improved search implementation

Same goes for Roon Radio, which I just posted to the dedicated thread.

I really like the improvements made to “Now Playing” display. Photos are nice and using album art when missing is well done. Thanks to Roon for listening!

It’s always worked that way for me during the 1 1/2 years I’ve been using Roon. I’m with you, wish it went back to where you were instead of the beginning.

A post was split to a new topic: Strange Roon Radio Behavior

May have been reported elsewhere…

To the right of the Album name in Now Playing,. the target zone for the album extends nearly all the way to the right edge of the screen. So when your mouse goes over this area it turns to a click pointer icon.

Not a huge deal, mainly cosmetic.