@Patrick_LP - I couldn’t agree more! I would really like either highest res, prefer Qobuz over Tidal, Local, etc…

Yay, a new update!
But the very first thing I noticed is a slightly fuzzy/blurry font. I thought one of the updates was supposed to improve readability? Maybe it’s a setting on my PC? I should note that fonts have always been a little fuzzy for me with Roon but now they seem a bit more blurry.

And still blue colors throughout the entire UI? What about those of us who are color blind and/or can’t see blue very well?

And I was super excited for New Releases For You but it’s about 50% classical which I’ve never listened to on Roon or Tidal, 30% albums from irrelevant artists/genres, and the remaining 20% is fairly spot on.

Can’t wait to dig in to more features.

Thanks John, you may consider this getting more priority with this “release for you” feature being out.

Seems to me current algo is prioritizing resolution (with caveat MQA is graded equal than same resolution uncompressed, we may consider this as a bug) with no prioritization on service (agree this would be an enhancement)

Congratulations on getting a major release out, and I am sure the fundamental change in database and infrastructure technology, which serve the Roon product well.

However, the overall release is still wanting in my opinion, and looks like it needed further testing and feedback in the Beta stages

And that’s just in 10 minutes following upgrade to this release.

Sorry to be negative, but, as a user who has have waited a long time for this release, but it doesn’t seem to have taken a user’s perspective into account - in terms of what I want from the UX, what’s my most common action on the UI, I want to do this - how do I?

8 posts were merged into an existing topic: Roon 1.7: the fonts are too bold

2 posts were merged into an existing topic: What I would have liked in Roon 1.7

2nd thing which I would like to ask is if the new android revision is direct to DAC; ie bypassing the android intervention which forces default sample rates?

Specifically… I have android based Fiio M11 and LG V30 which have great DACs but need the software to exploit them like UAPP or the Fiio music player app.

Can I add a Live Radio Station (great to have it by now!) to a Tag to organize my favorite live radio stations?

I guess this will come sometime

- the comment field display is a nod to Roon acknowledging somehow the need for more personal display of info.

Think Roon see the future as streaming and damn you if you prefer a local library. The argument that’s been proffered in the past is that most users don’t have a sufficiently large library to make the recommendations viable. I’d like to see Roon make recommendations using the same algorithm but skip over stuff not in my library, and if there’s no match then tell me tough, but your local library isn’t good enough for Roon to help. That’s my compromise, and I’m happy to own the consequences.

Ah, the obligatory feedback to a new release. Whilst I commend the undoubtedly hard work that the Roon team are putting into what remains a great product, I am again somewhat disappointed with the latest update (as I have been with the last few previous ones).

The headline feature of Valence sounded good to me - I had previously made feature suggestions of both have the option to display an artist’s discography and show you the albums that you are missing, and to show albums which others Roon users had in their library. Valence seemed like something of a sideways move in this direction, though I was keen to take a look at it. It was unclear from the release notes, though I have learned that it only applies to those that use streaming services. So no use to the customers that use Roon to manage their own local music collection (such as me), if I have understood this correctly.

I am neither here nor there on the bold text, which seems to be causing some consternation. Similarly, radio stations are not something that I tend to use in Roon that much. I am sure that there have been “under the hood” improvements in terms of speed etc and this is of course welcomed. The ability to show file comments under file information is nice and is a feature I had asked about a few years ago.

What is disappointing however is the lack of new features to the GUI which many users including myself have been requesting for a long time. This includes basic things like better organisation of albums on the artist page, for example being able to separate out bootlegs, just like albums and singles/EPs are already separated, better handling of box sets (with each CD in the set having it’s own artwork/metadata), better album art handling, and a number of other oft-requested things that can be seen in the feature request threads.

Ah well, I will continue to wait in hope!

Really impressed with the update! I appreciate that we’ll always be wanting more and that some of us will notice problems others don’t, but that shouldn’t detract from the overall great job Roon’s done here.

I hope my ears are better than my eyes btw. I don’t even notice the difference in fonts

I would imagine the intent is to recommend albums that you don’t know i.e. are not in your library (local or streaming) so they are consequently all streaming ones. I am fine with that approach and its implementation.

Ooh, harsh! But you may be right. I can’t for the life of me understand why local files wouldn’t be included in the options, other than it’s trying to encourage wholly new listens. Ill keep an eye out if it’s actively avoiding albums which I have already.

I would imagine the intent is to recommend albums that you don’t know i.e. are not in your library (local or streaming) so they are consequently all streaming ones. I am fine with that approach and its implementation.

yeah i hear you. I switched off streaming within roon simply because it was making the searches so erratic in speed terms. I’ve switched it back on now and will leave it on if the searches have been improved. I like the recommends of unknown stuff

It would be nice to have “Include Local Albums” as a toggle rather like the option to restrict Radio to local albums.

Yeah, that’s a pitty that Roon don’t use the internal Dac of my LG V40. Instead I also keep using UAPP for my mobile listening. Maybe it’s coming in the future.
And I’m also not a streaming guy. Listen to locally stored music only.

But I’m happy with Roon. Couldn’t live without it anymore. So keep up the good works!

I support this wish wholeheartedly. And so do my daughters living in a different city…

The internet radio live is what I’m looking for…sleek and informative. Manually entering the URLs are the things of the past. Thank you guys for the great job in making Roon a all in one streaming platform!

The new features are nice, but still waiting for DAC support on Android. Like others I am not impressed with the UI updates adds making for a more messy experience for me. Whats with the settings menu its now using half the screen estate on PC and feels all squashed up the improved audio menu is a step back if you ask me. 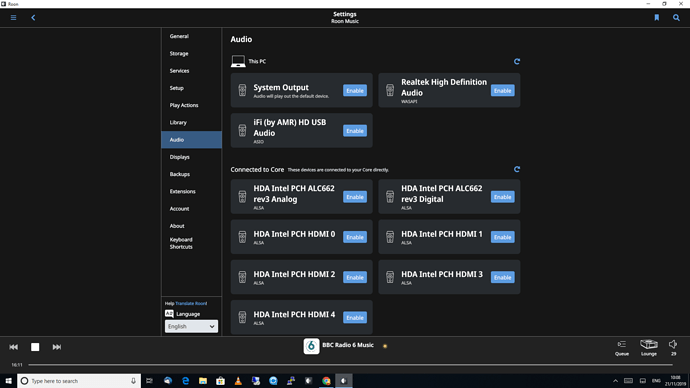 4 posts were split to a new topic: OptoRendu not recognised after 1.7