2 posts were split to a new topic: Sonos disappear very often from Roon

A post was split to a new topic: Squeezebox volume control after update

Did you update the core app to?

2 posts were split to a new topic: Grouped HomePods not working after update

The volume on iPad and iPhone were also bad with AirPlay but moves 6 units at once. Spotify Connect is only one that works correctly with app closed. At least 3 units won’t blast you and having comfort level set helps.

I’m going to assume it’s an IOS issue vs the Atom/Atom HE since they have same firmware.

2 posts were merged into an existing topic: Sonos disappear very often from Roon

However, despite updating the iOS app it seems as though scrubbing is still disabled on the lock screen - am I missing something?

I do love this software btw

Just last night I was lying in bed listening to music thinking it would be nice if the volume control on my tablet could change the volume in roon and then today it happened! Amazing!

Tonight I’m going to hope roon doesn’t skip to the next track when there’s a slow down. Maybe that will be fixed tomorrow!

Simon, I did realize that I needed to update the core too which I did. All set now. Thank you!

3 posts were split to a new topic: Versions missing after update [Resolved - Make sure Core and remotes are both updated]

Exactly. I found this bug in less then 5 minutes. Maybe a better beta test program would’ve caught this. If it’s not fixed asap I’ll be canceling my subscription and use something else. Not at all happy.

My mac and nucleus updated but I’m not seeing these changes? Versions are still the same? And my IOS app has not updated. Weird. Why? Edit: even weirder as I just got the IOS update!

Thanks for the constant updates guys. Appreciated!

Bug report. Is there a specific section for bugs? If so, please move accordingly. I didn’t see one. On the “New Releases For You” page, if you click a specific genre at top (i.e “Electronic”) and then choose an album within that genre, clicking the Back arrow goes back to the “All Albums” page, not back to the genre page you were on previously. This is particularly annoying if the genre page has a lot of albums on it, because 1) it forces the user to click the specific genre button again, and …

A post was split to a new topic: Playlists export in wrong order

Is there any reason why the opportunity wasn’t taken to recompile the Mac version as a universal binary so it would run natively on M1 Macs? Roon is now the only application I use that still uses Rosetta emulation.

Definitely! But that would come close to file operations which the Roon team has always been vocal about not wanting. They want the user to focus on the music, not the underlying files. But I’d be in favor of a clicable link, for sure!

Agreed, if it’s not fixable in the way that we would like most, then add an option to not use the volume control on iOS. I think that will serve many users well.

I still need to get used to the new version view and the grouping function.

But what I can say already: I’m desperately missing the possibility to remove albums from the library in the version view. Why was that function pulled? Now I need to go to an album again to delete it. Even more clicks on my 100.000 clicks journey to replace my entire Tidal library with Quobuz (even with the new export features).

Please, bring back the possibility to remove albums from the library in the version view. 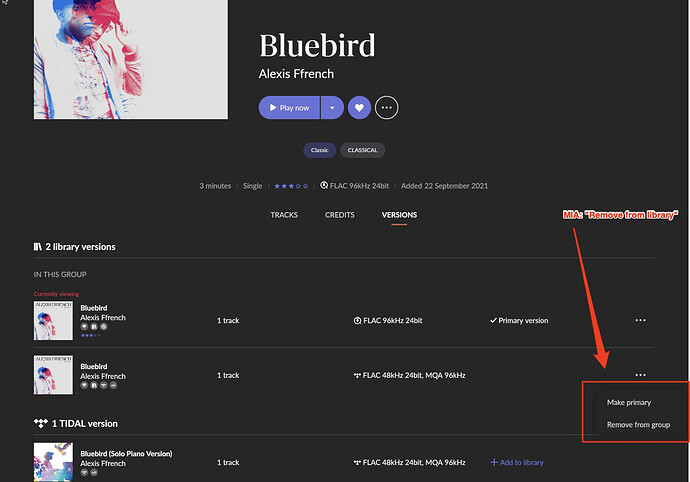