Hello to all, I have a question that I would like some arise on if I may ask?

First, let me please explain. I have spoken to Apple support, and have even done some profiles given to my by their developer team to find some answers. They / I have confirmed that the HomePod does indeed play at 16bit /44.1 kHz. (what they call Lossless) or at least there lower tier of Lossless.

In my test I have tired this; 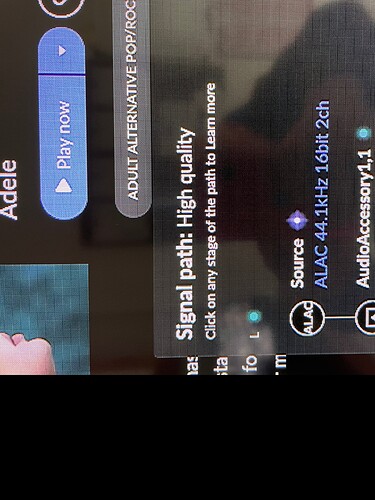 May I please ask if anyone can tell me why this is only showing high quality, and not lossless? 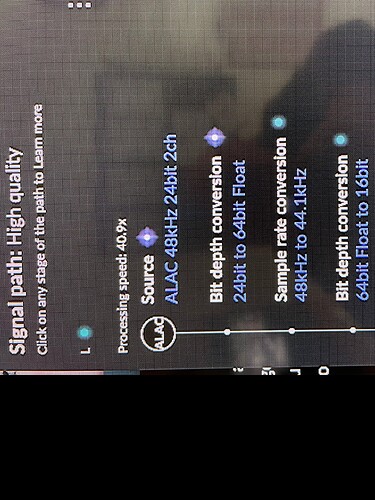 which is showing me that Roon is downsampling to 16bit / 44.1kHz. I understand this, but as stated when I play a file that is 16bit /44.1kHz is still only shows as high quality, when surely it should be showing as Lossless.???

Am I correct in my thinking?

And advise would be appreciated.

It would be helpful if you showed the entire signal path with correct orientation. However, it would seem that the switch to high quality occurs in the device, AudioAccessory1,1, not Roon.

The second screenshot is correct. Airplay 1 only supports 44.1kHz 16bit.

Thank you for your information. It is much appreciated. When I uploaded the pictures, they were in correct orientation. For what ever reason they are obviously not showing this now.

I agree, Airplay 1 only supports 44.1kHz, 16bit. Apple have shown and proved to me that the HomePods do indeed play this. They claim that the Homepod is functioning as it should. Its Roon that’s tell me that its not. So I guess what I am asking is, could there be an error in the showing of AudioAccessory1,1?

Without the entire signal path, no one can comment on what’s happening. 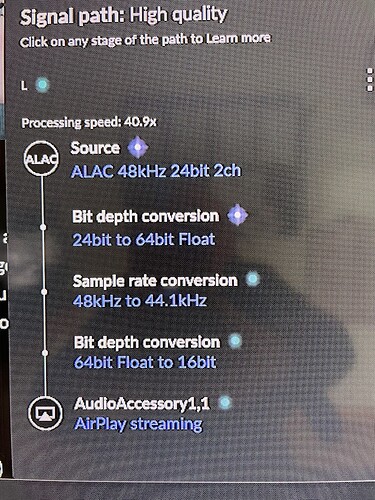 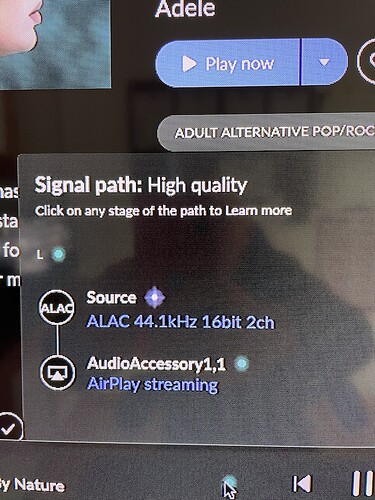 As I said earlier, the first screenshot is correct; conversion to 44.1kHz 16bit is necessary for Airplay 1.

The second screenshot looks fine too. Roon is sending ALAC 44.1kHz 16bit to the device. I guess it is Roon’s view that these devices only offer high-quality audio, regardless of the source material.

That would make sense to a point, however it showing the source file to be perfect. But still only shows High quality. 16bit, 44,1kHZ is Lossless quality, and if you where playing this on a Bluesound Plex for example it would show lossless. SO why is it not on the Airplay streaming to my HomePod?

Also just for an example.

I have the same album in AAC…

this is the signal path I get for that… and this does not make any sense…sinse when has AAC been 24bit? 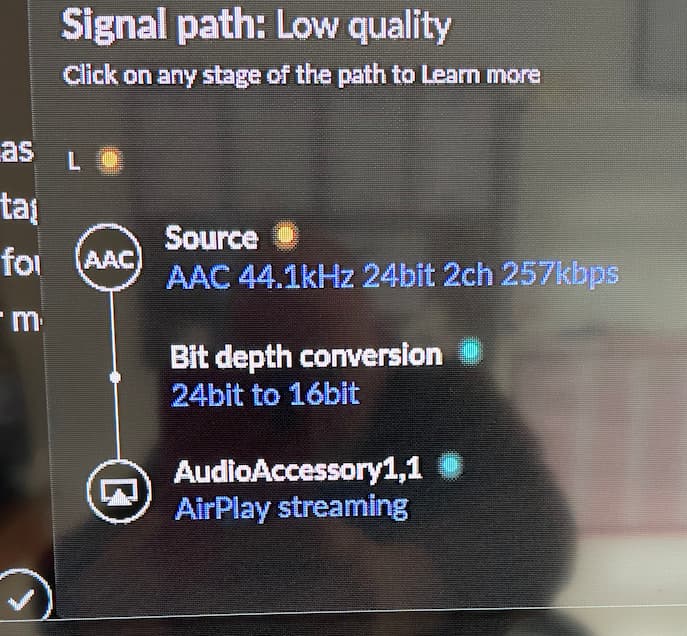 This audio file is 24bit, which isn’t supported by Airplay 1. Thus, the conversion to 16bit. And, this is a lossy AAC file.

What do you get when you

It looks like we always consider AirPlay to be “High Quality” as opposed to “Lossless”. Thinking back, I remember why. There are two reasons for this: Many popular AirPlay devices perform internal format conversions that we know to be destructive (example: all AppleTV models convert 44.1k->48k). Since AirPlay streams are clocked at the source, they must either have fancy adjustable clock hardware that can conform to the stream coming from Roon, or they must perform DSP to resolve the clock di…

Thank you for all your information, as always it is helpful. But the AAC is not 24 bit, it has been taken and converted from a CD rip, which is obviously 16bit. But it still does not make sense.
if the source is an ALAC 48kHz 24bit 2CH, and it converts 24bit to 16bit, and then the 48kHz to 16bit (as it shows in the picture) what it is stating is that that is there spec to make it play through airplay streaming. So why when I give it a 16Bit, 44.1kHz Source, does it not show Lossless, because that it was it is converting to play.?

But the AAC is not 24 bit, it has been taken and converted from a CD rip, which is obviously 16bit.

AAC is lossy and has a nominal bit depth determined by the decoder. Either way, a lossy format and classed as low quality. Hopefully, this post will help your understanding.

Once audio has undergone lossy encoding, it no longer has an inherent bit depth. The encoded bits can be thought of as a mathematical description of how to reconstruct an approximation of the waveform that went into the encoder. The decoder usually calculates the reconstruction using floating point or integer math with at least 24 bits of precision. We chose to output 24-bit PCM in order to avoid introducing unnecessary dither to the decoded audio. Dither is basically a necessity when dropping a…

Anything lossless over 44.1kHz 16bit is converted to meet the Airplay 1 limitation. Regardless, as explained before, and specifically in the post linked by @RBM, Roon considers Airplay high-quality since it is not possible to confirm that Airplay devices are indeed bit-perfect.