Do you have a few screen shots of HQPlayer and roon settings? The SOtM supports a lot of servers besides NAA. I have switched back to the SOtM’s “roon ready” server which I assume is a roon bridge. But I can try your settings and see if I have better luck.

As stated, I’m not using Roon. Settings for HQPlayerEmbedded to RPi 4 NAA attached via USB to Gustard X16. 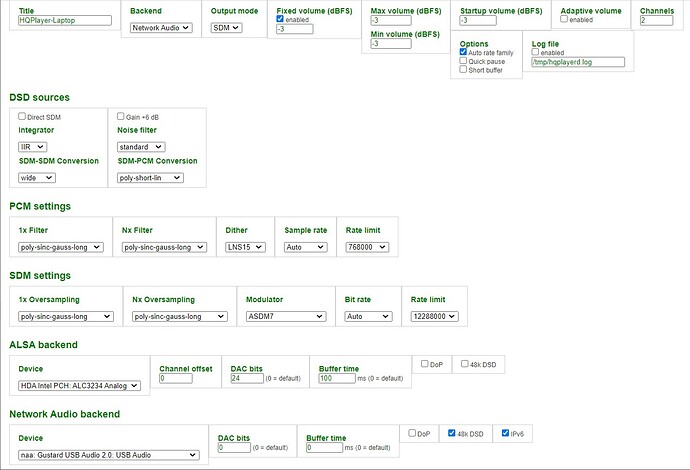 I am using different filters but I can start with yours.

From the help section:
“48k DSD:
Most DACs that support DSD, only support DSD at multiples of 44.1k base sampling rate. However they still likely announce support also for 48k base DSD sampling rates. This setting enables these rates, only set it if you are sure that your DAC actually supports DSD also at 48k base rates.”

If 48k DSD is not set, then HQP will convert 48k family source material to multiples of 44.1k DSD. This means that closed form can only work with 44.1k family source files.

Before Jussi enabled this setting HQP would sometimes send 48k multiple DSD to my 44.1k DSD multiple only DAC which sounded awful.

Thanks for the info, lots to learn for sure.

Thanks for the background but looks like I am out of luck. I’ve tried every conceivable configuration combination but the SOtM will drop the connection sooner or later with my DACs. There is quite a list that SOtM supports but the Gustard 16x and my legacy Eximus DP1 are not on it. The list might help others:

When my PI2AES arrives I’ll see of I have any better luck with that.

Honestly speaking, if you try a wired RPi4 with the NAA image using USB out via AQ Jitterbug → AQ Carbon USB (or your fav usb cable) → Gustard X16 with it’s NOS turned ON and using the HQPlayer filters you might be surprised. I’m impressed at how good the SQ is. I’ve tried vastly more expensive streamers into the X16, Auralic G1 and Aurender N100 for example using the same Jitterbug and USB cable, but, no HQPlayer filters as they don’t support NAA. HQPlayer and its filters has upset the (digital) balance for me (vinyl is still awesome though), it’s the game changer.
Of course my ears and setup may be different than for you, and maybe I’m going deaf (Not yet!).

Yes, I must admit I am curious if there are differences between between the SOtM and RPi4 based PI2AES presentation.

What are you using the Gustard 16x with? Headphones or amp/speaker? I am not having your experience at all. In hindsight I probably should have gone with the DAC only u16 as I don’t want to use the x16 pre-amp section and the SOtM does have a u16 driver but I was curious about MQA and went with the x16 instead. For me personally, using the x16 into my pre-amp I get a very thin, very etched sound. This was to the point I had to remove the convolution filters I use with my other DAC’s to tame a pronounced bass standing wave in my listening room. The NAA filters I tried certainly helped a lot but that also had the effect of making the overall presentation too forward for my taste and there was also a strange top end bloom that is difficult to describe but I found tiring.

Having said that, I was so focussed on the stability issue I did not get around to using the NOS filter or connecting directly to my power amp so I’ll try all that when the PI2AES arrives.

I have a RPi 4 here with Pi2AES. I will check it out with Jussi’s NAA OS, but don’t know when I have the time for that. I will report here.

But switching from the Pi2AES to the SotM sMS-200ultra Neo was a night and day difference in my system. With Roon that is.

DAC is Schiit Yggdrasil, fed via AES and USB respectively, but the difference is the bridge / streamer.

EDIT: No DSD here and also not more than 24/192. Might try first with RoPieeeXL which I still have installed somewhere.

which was which…night and day wise…is day better than night?

The SotM is lightyears better. I didn’t know if I would hear a difference and was absolutely blown away. Yes, it’s more expensive, but worth every penny in comparison. After adding the SotM it was the first time I didn’t have anything to complain about in my system. All improvements from then on are improvements of the kind “I didn’t know what I was missing.” But it was clearly lacking before that.

The RPi ran on a SMPS, the SotM on a Keces LPSU, though.

Unfortunately that is my concern. I am a long time SOtM user. I used their USB card long before the SMS-200 ethernet/USB bridges came along. That’s the reason I continued down the SOtM rather than RP route when my old music server finally crashed and burned. So there is probably something about the SOtM sound I like. But that’s the beauty of NAA, there are so many filters you can have it anyway you like.

At the moment I am using a Mark Levinson 5101 at a price point 10x the SOtM. But it’s not been built with any consideration to the roon eco-system. DLNA only so the only way to get it working on roon is as an LMS endpoint. There are a lot of limitations. No DoP support, only direct DSD so in practice I am limited to 176 or 192 PCM and no NAA filters. I am not as frustrated as I thought I would be. The ML sound is just very well sorted, its built like a tank and plays day after day with no intervention at all (there was a problem with “green” configuration switches on my internet drivers on my roon core I had to disable but now rock-solid) . I do like to tinker so that is why I had a PI2AES on order. So I can do blind tests of the ML against the Gustard instead of listening to music. Happy days (just joking).

It’s amazing the differences we hear. I’ve gone low (Pi4 with hats or just USB and always a linear ps) to several thousand dollar streamers. Never was night and day for me.

Yes, Its all very subjective. I am a long time Mark Levinson and Krell user. In the early days of computer audio when it was common to build your own streamer, I found SOtM “parts” invaluable in getting a sound similar to the CD and SACD sound I was used to. They still make a lot of cards and noise filters and power supplies for the DIY market. Ended up sticking with SOtM when I tired of the DIY. My guess is that I will need an external SOtM USB hub with the PI to get the sound I am used to:

Huh? This and IP6 are the only settings setting on the SOtM NAA GUI. Are you saying ‘period time’ has no effect on NAA or it is a SOtM customisation (maybe there are others) you wouldn’t make?

This and IP6 are the only settings setting on the SOtM NAA GUI. Are you saying ‘period time’ has no effect on NAA or it is a SOtM customisation (maybe there are others) you wouldn’t make?

It is SOtM custom thing. Only configurable item NAA is supposed to have is name.

Ok. Now I understand why a SOtM NAA server may not work whilst an official RP NAA image might. I had assumed they were the same.

Ok, I am on vacation now and finally want to solve my problem with HQPlayer.

Setup is: Roon on Windows PC, HQPlayer Desktop installed. RPi4 with NAA OS. DAC attached to Pi2AES with AES. All cables, no WLAN.

I downloaded the NAA OS image and flashed it on a SD card. The RPi shows up in the network, but I can’t access it when I enter the IP address in the browser (pic 2).

With RoPieee(XL), DietPi etc I know how to access the OS of the RPi and how to configure it.

Is this different with NAA OS? I cannot find any info about NAA OS and how to install or configure it at all.

So my questions are:

Needless to say that I haven’t been able to play any music yet. But I am patient and optimistic.

Maybe @jussi_laako can chime in. 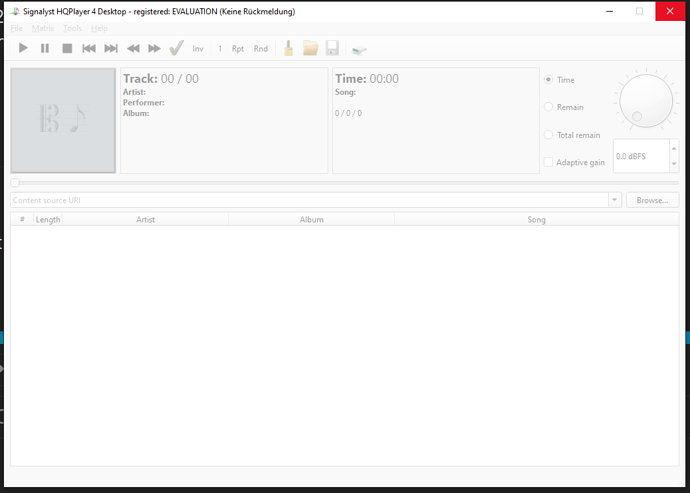