I’m running Roon on several PC’s and on one of them (just acting as a control/remote, not the DB) it consistently becomes unresponsive after about a day.

(Perhaps unrelated, but the Server/DB is running on Windows Server 2008R2x64 fully up to date. I’ve also not experienced this problem on any of the other PC’s I have running Roon; the other client’s and the DB all run fine)

Here’s a list of things I’ve tried:
1. I installed the update that came out a couple of days ago – no change.
2. I changed the setting in the Setup section to use less memory for Photos/Artwork to “Minimum” – no change.
3. I changed the sleep mode to disabled and that didn’t change anything either. In this case I completely disabled it, but again no change.

I really haven’t spent much time on this PC and issue because it’s a touch screen and I was waiting for the fix to the “Enable On-Screen Keyboard” setting not working. Now that’s fixed, I’ve become more focused on this issue.

I’ve attached a screenshot of what it looks like, but in case you can’t see it, what happens is the application (not the OS or PC or System) becomes ghosted out completely and is unresponsive. I have to close it out, which I can do do normally. I don’t have to force close it or terminate the process unusually. I can then start it up again and it works fine until this happens again.

I would appreciate any assistance with this matter. It’s really the last barrier I have to becoming a lifetime customer. 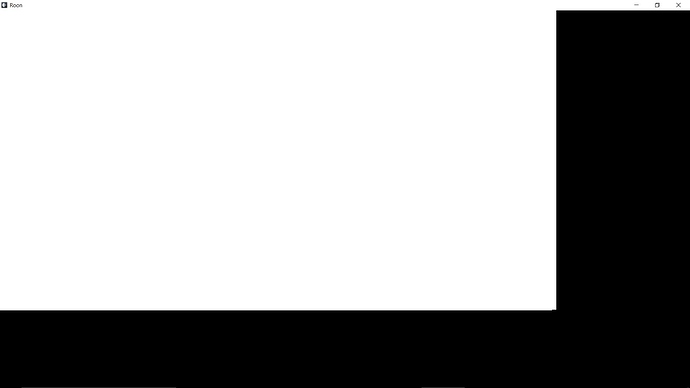 Hi @Bryan_Allen — Thank you for the feedback. My apologies for slow response and the trouble here. I would just like to clarify the issue here to make sure I am conceptualizing the everything correctly.

Based on your report
Core Machine = Windows Server 2008R2x64
Having The Issue = Dell XPS 18
Description = The Dell XPS18 touch screen loses connection with the core, becomes unresponsive and greyed out.

Can you please confirm:

Thank you for the response. Your assessment/assumptions are correct. The Core Machine is 2008R2x64. The Dell XPS18 is running Windows10x64 in desktop mode (not in tablet mode – I just don’t use it in that mode). When the Dell XPS18 becomes unresponsive (as in the picture I attached) the rest of the PC works fine, it’s just the Roon program that does this. I can control the Roon Window – minimize, maximize, etc. and it closes out when I hit the 'X" without having to be force-closed or terminated in “task manager”.

Finally, this problem doesn’t happen on any of my other PC’s connected to my Core Machine, just the Windows10x64 XPS18 tablet/laptop.

Just a thought, but this seems awfully similar to the blank screen issue being reported elsewhere in the forum. The fact that the white space is not filling the entire window may be down to a scaling issue on the XPS18. What happens if you change the display scaling? Does this impact the issue?

I see your point about the white space Geoff. So I changed the resolution from 1920x1080 to 1280x1024, waited a day and just like usual it ghosted out again (same problem persisted) unfortunately.

Here’s What I’ve Done and Observed in the Meanwhile:

Going on 2 days and no issues. For now, it appears that it was somehow related to Intel Graphics 4000 drivers. Jury is still out and only time will tell for certain.

2 days appears to be the limit as Roon ghosted out again. The graphics drivers didn’t resolve it. I’d appreciate any additional ideas or potential fixes.

So the problem persists still. A new observation is that it doesn’t take a day for it to happen. In fact it will happen in as little as 2 hours, at which point I must close it out and start it up again to use Roon. Come on guys, you’ve got to have some idea how to troubleshoot this.

Hi @Bryan_Allen – sorry for the slow response here. We’ve discussed this class of issue a few times internally and it’s a really frustrating one for us. From what I can see, the biggest clue in your report is this:

While I said it was unresponsive, turns out that was inaccurate. I noticed that I can click in the approximate area where forward and backwards are and it works. I am able to look at another running version of Roon on a different PC and judge where buttons are, then click there on the ghosted out version on my XPS18 and it works.

As you’ve surmised, this indicates that Roon isn’t crashing or hanging up, but instead that the interface is failing to redraw. Unfortunately, our options are extremely limited in cases like this, because this points to a driver issue.

Roon uses a custom graphics engine, like a video game. This engine is based on OpenGL, which is what allows Roon to provide identical functionality on so many different platforms, and what allows a team of our size to develop for so many platforms.

We depend on OpenGL to render our interface, and in turn, OpenGL depends on your GPU’s drivers to let Roon know when the interface needs to be redrawn. We have seen some graphics drivers have issues with this (Intel in particular, especially with older models like the 3000 and 4000) and we’ve seen this driver weakness affect many other applications, including widely used applications like Outlook and Photoshop.

Unfortunately, this leaves us with few real paths forward. We have seen times when Intel releases an updated driver and the issue goes away completely, which obviously would be a nice solution here. Some Intel drivers seem to work decently (including affected GPUs on OSX) and some appear to have significant issues in how they communicate with OpenGL and the applications that depend on it (like Roon).

In systems with multiple GPU’s, we’ve seen improvements when people “force” Roon to use the non-Intel GPU, as described here. We know that’s not an option for everyone, but it has helped some of the maybe 20 or 30 reports of this issue we’ve seen.

There’s nothing we like less than saying “we can’t do better” but unfortunately in this case we are the mercy of the driver.

Thanks for following-up. I’ll look into trying to force it to not use 3d-acceleration / OpenGL. I’ve seen a lot of applications provide this as a checkbox option in their advanced settings to disable 3d-accel, graphics card acceleration, or however they describe the settings.

In any event, I appreciate the assistance from you and your team, and I now understand the issue much better. I’ll report back with any updates.

nothing we like less than saying “we can’t do better” but unfortunately in this case we are the mercy of the driver.

So I’ve done some additional testing based off from this other discussion thread. I now have Roon in a situation where it runs when started but once I minimize and restore, Roon goes into the “white screen” mode. I was able to revert back to Microsoft’s basic display drivers, however as you said Roon is unhappy in such a situation and requires drivers that support OpenGL 3.0 or higher. My hope was to simply not support OpenGL and see if “software rendering” of old-days would work, however it appears you don’t support that mode sadly.

I’m also trying out other settings, drivers, etc, however nothing seems to work so far. The issue, from all appearances, seems to be the HD4000 Drivers and/or the hardware implementation associated with OpenGL. I suppose that Direct3D is not in your development path for native support on Windows? I have not tested this on the other 4 machines that I’m planning on rolling out which are Intel NUC -NUC6i5SYH machines which rely on Intel’s Iris Pro 540 Graphics. Have you had any reports of issues there? I can deal with on machine not functioning with Roon, but if it’s 5 (out of 8) then I’ll start to have buyer’s remorse (I purchased a lifetime license last week).

I have never had an issue with Intel Graphics, although, I don’t use Dell. Only Gigabyte NUC’s or self built machines.

Thanks Daniel. What model of Gigabyte NUC-style machine are you using?

The only Dell machine I have is the XPS-18 which is an overpowered tablet with an 18" screen and a built-in Intel HD-4000 graphics card. I wanted a gigantic touchscreen tablet and got this and it’s been pretty good for the last year or so.

The Intel NUCs are entirely Intel built (you can find details on the model I bought at http://www.intel.com/content/www/us/en/nuc/nuc-kit-nuc6i5syh.html) – they’re very powerful and small. I’m looking forward to having a rack shelf of these to serve as “zones” in a distributed media server fashion. Roon is part of that plan so fingers crossed.

The Intel NUCs are entirely Intel built (you can find details on the model I bought at http://www.intel.com/content/www/us/en/nuc/nuc-kit-nuc6i5syh.html) – they’re very powerful and small. I’m looking forward to having a rack shelf of these to serve as “zones” in a distributed media server fashion. Roon is part of that plan so fingers crossed.

Forgive me for saying so, but having a rack shelf of NUCs as “zones” seems to me to be rather an overkill? Do you mean they will be Roon endpoints? Presumably with some form of audio device attached to each?

Personally, I would use the Raspberry Pi approach: a set of RPis, each fitted with either IQaudIO or HiFiBerry DACs, S/PDIF or Amp cards as appropriate. That would be a much cheaper approach, with equally good sound quality (at least to my ears). And I’d distribute the endpoints out over the network in the physical spaces used for the zones, rather than concentrating them in a closet and having to run speaker cables.

I use an Intel NUC for the Roon Core - and it runs Roon Server.

Haha, yeah I can see where you might think that’s serious overkill. They won’t be just endpoints…These will also run a Video Streaming Program that’s attached to a central controller for each zone, so they will be doing video and music. Video playback can require decent hardware and I just wanted to be future proof too. The video is one per zone as they’re also feeding from a movie collection with another program similar to Roon (MyMovies+MCE for now but I’m still evaluating alternatives) but for all sorts of video and streaming. I’ve already done the testing to make sure they can handle everything. Back when I did it, I was running Jriver and Jremote in addition to the MyMovies system (I know Jriver can do video but I’m not a fan of theirs).

I’ve been wanting to get into the smaller, lighter endpoints so if you have a preference (I know we’re getting off topic a bit) and know what works well, please let me know – I’ll look over the link you sent also.

Ah, got it. Yup, RPis might work for video streaming (using Plex or Emby for example), but you’re probably close to the bleeding edge.

I’ve got an HTPC (home built several years back) that is the player for our home cinema. If I were doing it today, I’d use an Intel NUC as the basis. The HTPC is integrated into the Roon network.

You would think, but weirdly enough high resolution music can be a tougher hit on CPUS, especially if there is any realt-ime transcoding involved. See power needed to upconvert CD res to DSD512.

Yes, and I have about 90 DSD albums, on top of that I have a ton of other hi-rez flac. I used to use the upsample functions in JRiver to upsample everything to DSD64 so it did DoP to my Debussy DAC. Also another reason why I ended up getting the NUC’s.