I have a difficulty getting Roon connected to my Bluesound Vault 2. Roon connects to my Mac, so this works fine. My Wifi is switched on and Bluetooth is also working. I tried “find a different core” but nothing can be found. I gave the IP number of the Vault in the menu with no result. There’s no explanation how this needs to be done. What am I doing wrong here…?

See if the issues persist with the Node 2 connected with Ethernet.

The vault is an endpoint. It can’t be used as a core. Using BluOs the vault is a stand alone device and no computer is needed.

You can add it in Settings - storage 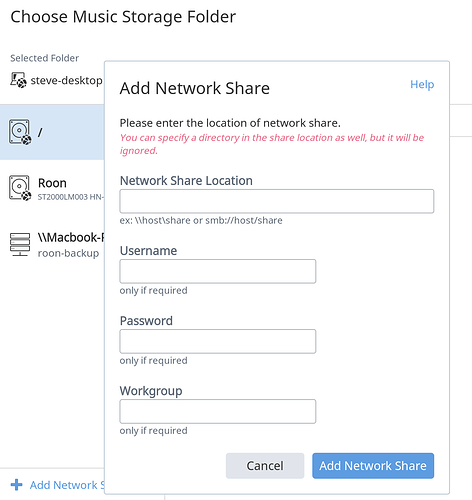 this will add the music that’s on the vault to the library.

Then you can also add it as an endpoint. As the Vault must to be wired to the network it should automatically show up in settings - audio

I don’t have the vault so in the example below you see the powernode. 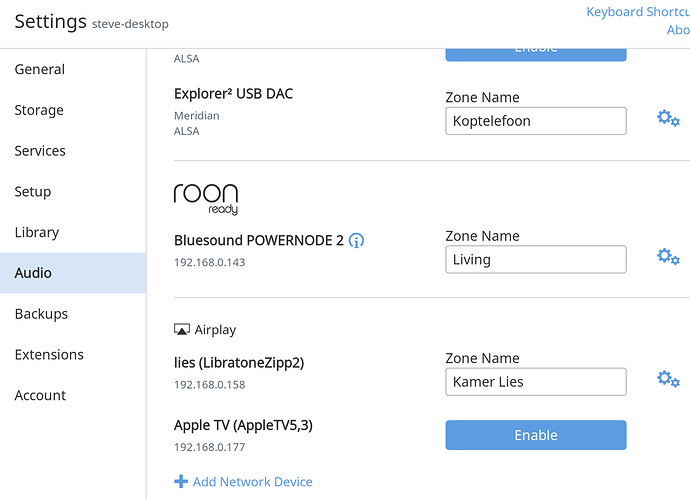 Pick it and you should be able to play music now 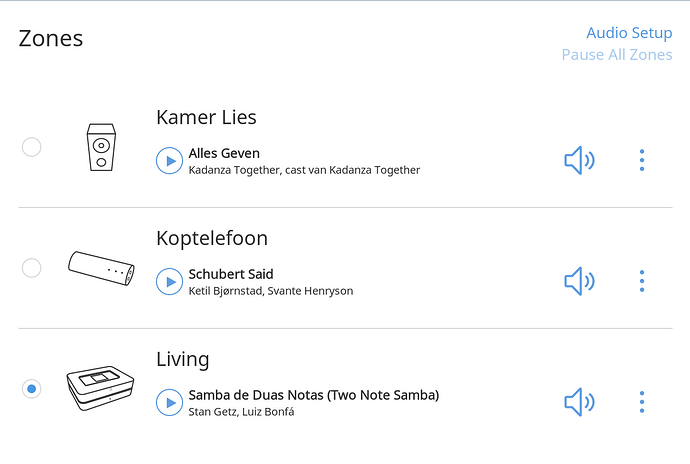 The internet is not the problem: I can play music from Tidel with BluOS app. This works fine…

Thank you Steve, Thank you for replying. And if this is the case then Bluesound is misstaken by saying it is working with roon. Why do I purchase Roon if i can only play with BluOS app? So it does not run Roon on the OS however they say it does! I think I bring the device back and purchase a real streamer or a Mac mini and a DAC. I am really disappointed in Bluesound. Before I bring the machine back I need to get the CD out. Neither the software way, nor the hardware way works. The instructions in english do not match with the menu in Dutch. The function “eject” simply is not there…!

Does someone have an idea? In Nederlands of Engels…

Bluesound devices do work with roon but you will need to install roon on a pc or mac. This will be the core. The vault can be used as storage and as an endpoint for roon.

You can then add as many roon remotes (mac, pc,phones,tablets) as you like to control the vault and interact with the library. This page might clear things up

did you try this to eject the CD?

Roon works well on the Mac. BluOS works well on the Bluesound Vault 2. I pay Roon subscription not only to play music on the Mac. So the only choice is to connect the Mac with poor USB connection to the Bluesound. If this would be the only way, then I woeld like to control the USB connection in such matter that is is an asynchone connection. There is no info where to adjust that. But this is not what I want. It is not strange to demand that I want to use Roon high end an control this on the iPad. Do you agree with me?

Thanks for the link to the instruction to eject the CD but non of the two methods work, unfortunately.

What about you? How do you use Roon…?

Were you able to add the vault as storage and configure it as an endpoint as I described above?
Can you share a screenshot of the audio settings and storage settings in roon?

Just so be sure can you also check if you have the latest Bluesound firmware installed on the vault and confirm the vault is connected to your network via ethernet cable.

You should see the vault as a roon ready device and, once enabled, select it as a zone for playback from the roon app on both your mac and iPad.

Well, I can adjust in Roon on the Mac: settings, Audio an Roon. There I have a Zone Name, which I recognize. But that is not what I want. I want the Blu run Roon solitary. Why do I need the Mac to run for this service? If the Bluesound cannot do this I need to buy a Mac mini and a DAC. But this is why I purchased a Bluesound to have a server, a DAC and a CD drive in one device. But this is not true what Bluesound says, Bluesound says it is running Roon, but it does not!

And, yes, I runned the update. What also suckes, is the CD that is in the drive with the absence of an eject button…

Quote: “Bluesound Players and BluOS on NAD Players are certified Roon Ready. Bluesound Players running BluOS 2.10.0 or higher will appear in Roon 1.13 or higher. No configuration changes are required in BluOS.” well? It does not!

Steve, it would be nice to hear how you have organized this…

They are roonready just as the quote indicates, many users are using them as Roon endpoints, I’m still trying to figure out where you saw Roon core or server?

Hi Philip. You can use the Vault 2 as your music storage as well as an end point but you will still need Roon core or server run on a PC or Mac to do what Roon does. The Bluesound devices have no ability to be a Roon master, just slaves. The machine doesn’t need to be a fast hot machine. It could be a NUC with one of the more modern Celeron chipsets if all you want it for is to curate your collection and run with no upsampling or convolution. It can be left on, out of the way and administered remotely plus being Celeron it will be good with power.

Hello Henry, Thank you for your info. Apart of the fact that it is not true what they say about the capebility of the device (i can only use this with an extra Mac or PC) I can not use Roon at all in the Bluesound. Okay, the case is this: I have an iPad and an iPhone 6 plus. I have a Mac with Roon running. I have a subscription with Roon and Tidal. I can control Roon on the Mac. I don’t want the Mac running al the time, but any way, I can only play music in BluOS App on Bluesound Vault streamer OR using Roon on the Mac. But not Roon on the Bluesound. The info the company is supplying is really poor.

Ok, then I think your recourse is primarily with Bluesound. Sadly it is a given to those of us familiar with Roon that a PC, Mac or powerful NAS needs to be running Roon Server or Roon core. It needs to be x86 so the sort of processor the Vault 2 or lesser NAS devices won’t work. I think you need to make peace with this fact after which it will hopefully be possible to iron out your playback issues which are that it doesn’t work even when you have the core running correctly on a Mac and that you have a CD stuck in the Vault 2.

how do I connect Toon to Bluesound Vault 2. Toon only recognises by wifi enabled Bluesound speakers. As Vault 2 is attached to my main stereo system I can’t play music via toon through my main speakers only through Pulse mini and flex.

Your Vault should be visible as RoonReady device in the same way your Pulse and Flex are.

Where is your Roon Core running? How is the Vault connected to your network? Is it part of the same subnet as the Wifi devices your mention?

the toon core is running on my Mac. The vault 2 is networked to this mac. I can read its contents as a drive on my mac so no problem with this connection. vault 2, pulse mini and flex all work together just fine through Bluesound app on the mac. should I set it up as storage as mentioned above?

i have completely lost my audio zones. Connection has been a bit hit and miss for some months but it has now gone completely. all other aspects of Roon work ok (i can see my music library etc) but no sound! i have a blue sound vault 2 which connects to my main stereo speakers and blue sound pulse flex speaker. the blue sound os works fine and recognises all speakers. my core is a mac (2016) running high sierra os. please help.

I am having the identical problem. Where do I find the network share location in order to add the files of my Blusound Vault 2?