Combined with a NAS the NUC loses it’s size advantage: 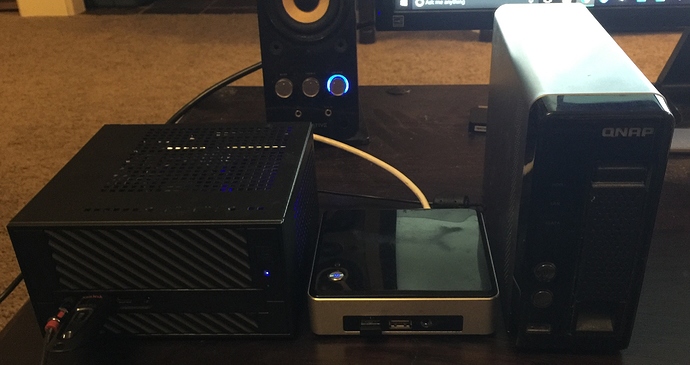 Wat about TDP? 15w vs 51w. You could use a USB hard drive with the NUC instead of a NAS. For some customers a portable hard drive might actually be beneficial. 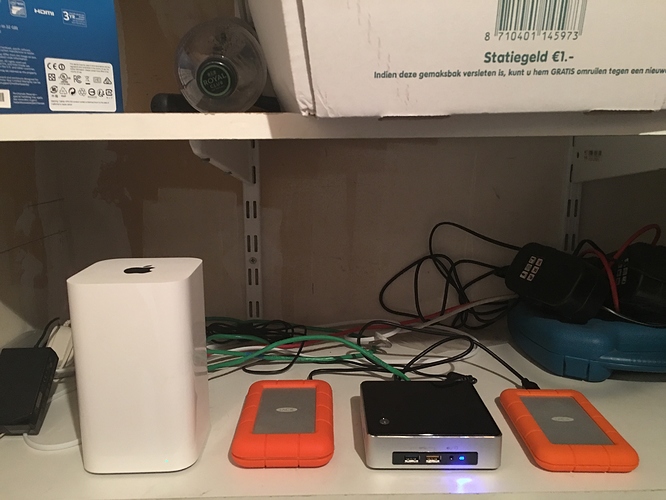 Debian + RoonServer on the NUC, music disk to the right, backup disk to the left, second copy in the cloud. Size matters – as does local availability globally.

Yes that’s why there’s choices. In the real world the extra power consumption of the desk mini would likely work out to $1 per year. But if you need to run both a NAS and NUC, that would likely consume more. Some people just prefer 1 box. I have 6 NUC’s here so I’m quite familiar of the pros/cons of both setups. 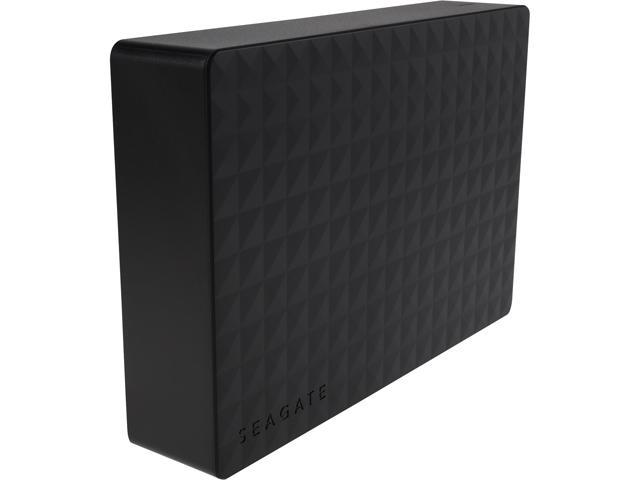 Will ROCK support audio and video output over HDMI? I was hoping to start out with ROON on a NUC feeding audio to my preamp via HDMI. Iwas also hoping to display ROON’s GUI on my TV while listening.

Why bother with ROCK? I found Roon-Nirvana with the deskmini. It’s a fine machine, i have a 512GB SSD with macOS installed and a 2TB FireCuda Seagate Drive for my Music Collection, all build in. Currently i use a i3-6100 (with nearly unhearable noctua-cooler) which runs at 3,7GHz and 16GB of 2400MHz DDR4 RAM. I plan to move up to a 3,4GHz i5-7500 Kabylake and a superfast nvme-SSD which seems the best Kombination for this small box with 120W Powersupply. I added Bluetooth/ac WLAN to the deskmini and 2 additional USB 2-Ports (all build in). This Setup runs 24/7 with Roon without problems. Backup of the Music Library goes to a NAS.

So, i found Roon-Nirvana with the deskmini, because i didn’t have to spend €350 to 700 for a single-purpose device. I can use the deskmini for a few hours or a few days off for other uses if i need to or let it alone forever with Roon only. It’s my choice. I can swap CPU/RAM if needed or even use this thing for something other altogether and move Roon somewhere else. I Love to have my Musiccollection and Roon Core build in the same device, i hate to use external drives or a NAS for this purpose because it adds unnecessary complication and failure-sources which didn’t exist if all is build in the same machine.

Yes, a common and reasonable view. I have argued (many times) that the opposite view, multiple small and cheap single-purpose devices, is the way of the future. My argument is about total cost, and reliability.

Multiple dedicated boxes made no sense when computers were expensive (my first PC cost $5000 1985 dollars!), but today they are not. Heading steadily downward, from $1000 to $100 and we begin to think about $10.

But the other side is effort. You set up a very impressive configuration. So have I, and it’s fun and a source of pride. But how many hours went into that? How do you value your time?

And the biggest issue for me is management and maintenance and reliability. General purpose computers are complex and unreliable, precisely because they are general purpose.

Thirty years ago, one of the kitchen appliance companies came up with a new architecture: instead of buying a blender and a mixer and a food processor and a juicer all with their own electric motors, they put a single electric motor in the counter and you just placed your motor-less food processor on that when you wanted to whirr something around. It didn’t take off. Not just because of the numerous practical issues with it (single point of failure) but because it optimized the use of an inexpensive resource, the electric motor. And just like the “fractional horsepower electric motor” was revolutionized so your house now has hundreds of them, so compute power is going through the same revolution. It is becoming so cheap that we care more about other factors, like management labor and reliability.

This is a somewhat forward-looking analysis, and it’s about non-techie users. But I absolutely believe it’s where we are heading, in ten years or today, or five years ago and we just didn’t notice?

i’m putting my money where my mouth is. Not just in my system but professionally: i have stopped working on general purpose computer systems, only interested in single-purpose devices.

I am looking to build a dedicated Roon server to interface with a MicroRendu (already have). I have a Devils Canyon i5-4690K and 16GB of DDR3-2133 from a previous PC build I can recycle. Could I use this ASRock case and just add a 128GB M.2 drive to give me what I need? I am currently running Roon on my main PC but continue to have issues with the quality of the USB output into my DAC (Schiit Gungnir). Hoping a dedicated Roon server and the MicroRendu will solve that. My music collection is stored on a Drobo 5N NAS. Looking for the cheapest way to add a headless Roon server box using the parts I already have. I am experienced with building PC’s. Thanks!

That generation of processor is not officially supported although it may work. However if your primary concern is sound quality then the microRendu into the Gungnir should be all you need for a significant lift in performance

I was going to make the same recommendation. I’m using the sMS-200 into 2Qute and it made a tremendous difference.

Thanks! So just use my PC as the Core and add the MR to my network? I was under the impression that having a dedicated RoonServer would help sound quality further. Actually I have an ASUS Gene VII mobo, i5-4690K, and 16GB of RAM I was going to post to eBay. Could I repurpose that into just a dedicated headless machine running RoonServer? Would just need a case and a small M.2 drive. Have a spare PSU I can use.

Stick the operating system on a small SSD. It doesn’t need an M2 unless you have one around.