I just wanted to add one other thing to this thread for you when you set things up. As Slim said, the whole thing is pretty easy (especially the hardware part). Some people report issues with getting BIOS set up right. I’d read through the Roon KB articles first. You may also want to refer to this thread, starting around Post 26. @ScreenMachine found the instructions in the KB did not mesh with his installation experience, so he wrote down notes from his install.
The Community is really helpful and there to help if questions arise.

The ROCK instructions say to update the BIOS. I don’t believe updating (not to be confused with any BIOS setup you may have to do) the BIOS is necessary any longer, especially with a GEN8 NUC.

Updating BIOS can be fraught with peril. I never do it unless I absolutely have to.

Try it without the update, first. It’ll probably be OK.

@grossmsj thanks a lot for the clarification. So I will buy a 16 GB RAM, 128 GB M.2 hard drive and possibly a 1 TB SATA SSD. I will install ROCK on the 128 GB hard drive and copy my music to thr SATA 1TB.

I will look into that thread that you linked here. Thanks again. This group has been truly helpful.

Get a server like antipodes audio, all the Linux code written, apps installed, plug n play. No fuss no muss fantastic sound.

I have a Mac Mini as Core, am happy with it but it won’t last forever. The new ones are very expensive. If I replaced it with a NUC and run it headless in a remote location, is it possible to access it via Mac screen sharing? I don’t own any Intel or Windows devices, so have no way to test. If not via Mac screen sharing, there must be some way to access the NUC remotely from a web browser, or something, for routine maintenance. What do people use?

Regarding an optional power supply, at one point Roon was considering making one available but ran into problems alluded to in the below quote from a Roon principal in Feb. 2018. That suggests that Roon felt there was an advantage to be had in a different type of power supply.

There is no Roon branded PSU. We ran into some problems, and resolving them meant picking sides in “audio religion” we aren’t interested in siding with.

This project has been on hold until we find partners who are willing to work with us on this – partners on both sides.

If you install ROCK on the NUC, there is no need to access it at all once setup. I am not even sure if SSH is enabled on it and I have never felt the need to poke under the hood as it just works and works well. This does of course mean that it cant host extensions either, however I find a NAS or raspberry pi to be good for that.

There is a basic web UI for setup and in case you need to re-install anything.

As for routine maintenance - it takes care of itself. Think of it as an appliance once setup rather than a computer.

My Mac Mini’s main purpose is to run the Roon core. However, occasionally I have used it for other (mostly music-related) applications (such as HQplayer, BitPerfect, HDtracks music downloads, iTunes, Pandora, REW). So all that is out the window with a NUC? I thought these things were sold to most people for general purpose Windows computing, in which case I could run Roon core on it the same way I do on my Mac Mini. Is it ROCK, not the Roon Core per se, that turns it into a single purpose machine?

No problems here.
There is a browser-based GUI to view the NUC/ROCK.
You can mount the ROCK like any other network drive and move files to it by drag and drop.

A NUC can run any compatible OS - Windows, whatever flavour of Linux, etc, probably even OSX though prohibited by Apple’s license. In the end it is just a well known tiny PC. There are editions of NUCs that include Windows.

ROCK however is a Linux (I believe) based OS optimized to specifically run Roon - hence the name - Roon Optimized Core Kit - ROCK.

If you want to run applications and services other than Roon, then ROCK will not be suitable. OTOH if you want to be able to treat Roon server as a hands off appliance like any other hardware streamer, then IMHO ROCK is the ideal solution. Maybe with Roon removed from the Mac Mini onto its own hardware and left in effect as an appliance, the mac mini will better serve for your other uses.

There are probably many audio optimized Linux distributions that you may find suitable if you want to get off OSX. I am sure there are folks here who could advise on a suitable distribution. These days many such Linux distributions are quite hands off once setup to the extent that I probably consider them my favoured OS (whether x64 or Arm variants) for appliance like devices.

It’s not that I want to get off OSX. I love OSX.
But if my Mini breaks down tomorrow, I want options for Roon Core (plus other stuff), besides buying another Mini at roughly double the $759 I paid for this one. Preferably a single box, low clutter, relatively low cost solution with SQ at least as good as what I have now (which is quite good, to my ears). I mean, I don’t buy a single-purpose automobile (with no heat or AC, no entertainment system, no passenger seats) just to optimize the driving experience. I expect a modern computer to be able to serve up good audio SQ while also performing a few other functions (assuming it’s appropriately configured, with adequate RAM, reasonably fast CPU, etc.)

You have no need to worry. The hardware is every bit as capable as Mac hardware (seeing as it is the same!) so you just pick the flavour of software you can live with easiest.

If you buy a NUC (a NUC not Nucleus) and run WIN10 or a Linux fork (but not ROCK), then you can use a Remote Desktop app to log into the machine.

I remote into a Mini from a NUC, but you can go in the opposite direction also.

As mentioned, there is not remote viewing for ROCK as there is no desktop. It is an appliance that is controlled through a web interface. And of that, control is very minimal.

If you use Windows or Linux (not Rock), then you can use a Remote Desktop app. For windows and Mac s, I use Teamviewer or Splashtop.

OK, thanks all.
Sounds like there are some good options to consider.

I just bought the essentials. Now it’s time to read “install” thread and continue to the next step. 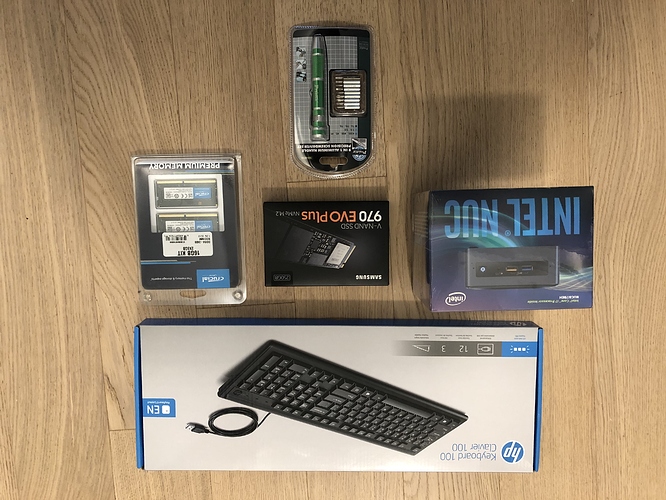 Per your advice I am going to start off with MUSic on my 2 TB external Hard drive. Then if it’s slow, I’ll add another internal hard drivf

It most likely will not be. I’ve got my music on a 2 TB external USB 3 drive. No issues at all.

The important bit is the speed of the drive where the database is stored, not the speed of the music storage. This is what will largely govern UI responsiveness for a large library. OTOH a small library may end up getting memory cached I guess if there is sufficient memory.

As far as know the speed of the music drive may slightly impact initial import analysis, but mostly I think it just needs to be fast enough to support the number of concurrent playback streams at whatever bit rate they may be assuming a worst case of all zones are playing from NAS at the same time, so not very demanding at all really.