I am currently trailing Tidal and Qobuz and I noticed that when looking at recommended albums it doesn’t always show as streaming service icon for the the album. Only when selecting the album and checking the versions do I see that a particular service does feature the album in their catalogue.

For instance Gregory Porters, Take Me To The Alley shows only a Qobuz icon but versions doe exist on both Tidal and Qobuz.

Yes I think it shows the highest resolution version of the Album. It does in my case, as clicking it takes me to 24/96 Qobuz version.

Ah OK, so if both Tidal and Qobuz is shown they are the same quality?

No, the TIDAL and Qobuz logos indicate (or should indicate) version availability. Sometimes streaming services have different releases of albums which, for a variety of reasons, are tricky to unambiguously treat as the same album. Sometimes (in the case of Qobuz) apparently streamable albums are not available for streaming and what you actually get in the Qobuz apps are 30 second demos.

Then there is something wrong as often only one icon is showing although both services have versions of the album in question.

It’s only in the versions tab that you will see them all. Each album itself will only show from whichever is selected as primary (usually the highest quality unless you override it)

I hope that makes sense

Depends on the view.
Under search, albums both show.
So for the 10cc album, my rip with it’s measurements show as well as the streaming icons.

Not so if it’s not in your library

When in your library it will only show the source of the primary version unlees you drop to versions.

Same goes for a search if it’s in your library it only shows primary version.

Ah fair enough like Vampire Weekend I stand corrected as I never seen that (but I only have Tidal and local).
Thank you for that information, as I always thought it was based on the selected default album and until now nothing has made me think otherwise.

It is if it’s your album collection just not for those not added and the discography which is collated from streaming services and will show you all versions if they match to the ones in streaming . Often in that view you cant see your own local version as it’s a different release not in streaming services so you have to group alt versions, which then cocks up Roon if streaming version changes I have found and a reason you can’t delete albums.

Thanks for all the explanations. I have to say it seems very confusing and over complicated though.

As far as I understood the icons are there to tell you if the album is available on a particular service or not, simple as that, and therefore in my opinion should show the icon for each service irrespective of the quality.

It’s fine and reasonable to show the “primary” (best quality) version once I’ve chosen the album and only show other versions in the “versions” tab. Just my opinion as a new user.

I think the OP was specifically referencing the Recommended Album section under an Artist. I reviewed it on my system and it is indeed only showing one streaming service icon not all of them. The question is “Why is it showing only one?”, and “What decides which streaming service Version is being offered up?”. I thought it was based on best resolution. 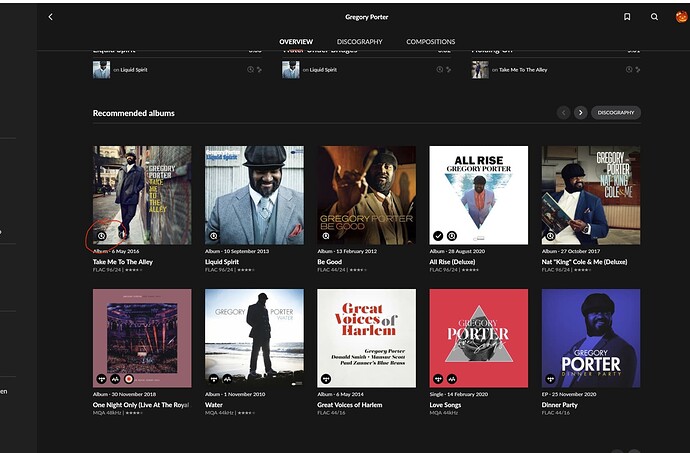 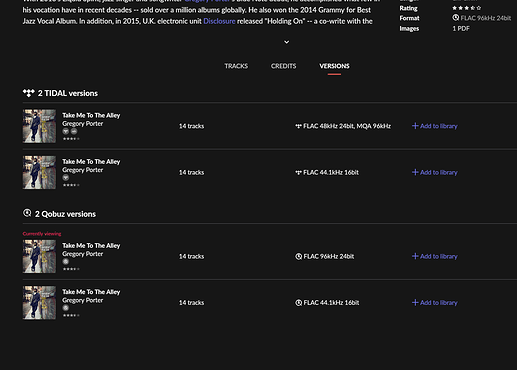 Thanks for explaining this more eloquently than I could. This is indeed what I was meaning.

Sounds like a big as in Discography it shows them all regardless of in your library or not. Another one of Roons UI inconsistencies it seems.

Hey @Keith_Bage, let me see if I can get a definitive answer for you.

@CrystalGipsy, nice to see the 13th Floor Elevators getting some love on Community. I saw Roky play in Austin with Billy Gibbons on rhythm guitar several few years ago. After the show Billy asked me ‘Did I get the jug parts right?!’ it was a pretty mind-blowing show. Roky was wielding a red Epiphone Casino and could still play his ass off - as they say in The South.

Sorry for the delay in getting back to you, I was out of vacation and couldn’t get replies out to everyone before I left.

The Recommended sections in Roon are treated a bit differently. You can think of those sections as being like the Staff picks in your favorite record shop. Not every version of a particular record is highlighted in those displays, just a specific version ( Kind of Blue on Mo-Fi for example). So what we’re showing you in Recommended is the version we suggest or the version that is most played by Roon subscribers. It’s a more minimalist presentation.

In Discography and Search the badging we display represents a comprehensive view of Miles Davis, it’s handled more like going to the Miles artist section in the store where you may see several release versions of titles and more variety than you do in the highly specific Recommended section.

It’s Roon’s way of mimicking the record shops where our love and knowledge of music developed. I hope this helps to explain the badging treatment you’re seeing.