Would be nice when someone comes into your home and they show interest in your Hifi system and would like to hear how it sounds with there choices of music. The ability for anyone to airplay to any of your endpoints through ROON and also control the volume with their phone. And for me not have to worry about them driving the system into overload with volume limits set. This would open up a level of acceptance that is currently not available to ROON. What I have found out is that once a person has to use multiple devices or have the owner of the HIFI provide interaction. The enthusiasm plummets. There would be no need for displays and such as everything would be available in the palm of there hand.

The ability for anyone to airplay to any of your endpoints through ROON and also control the volume with their phone.

For less than $100, install Raspberry Pi’s running RoPieeeXL. Airplay is built in.

Respect where you are going, but is downloading the roon app and just using it that hard? No login or anything, download and go.

I have a couple of the Rasberry Pi and agree that they make nice endpoints even though I cannot figure out how to integrate the serial volume control through RS232. What I think would be an ultimate solution would be the allowance of any Roon endpoints to be turned into Airplay receivers. Either by software or a Bridge solution. I have multiple zones throughout my home and would be very nice to directly airplay to them as I can play from my library and Qobuz.

The only issue is that if someone has their own library that they want to here then just downloading the Roon app does not work as an elegant solution to immediately play from there device.

Couldn’t you just hand them an iPad with roon and Qobuz or Tidal and have them type whatever they like and let them listen? I have Naim HE which also has remote for volume and playback control, so made it easy for friends to play with. I suppose they could have also used their Spotify app and played that way but wouldn’t sound its best. Naim also have app to set its volume limit to avoid any connections going too loud. The roon app also controls the volume as well with phone’s volume control. Actually all the streaming apps to Naim work that way.

Sure that could be done. But that would not be an elegantly integrated solution. Many people have playlists on their devices and look for immediate satisfaction without jumping through hoops just to hear their music. For instance, I have a couple of zones that utilize a Marantz NR1504 receiver. The receiver allows a seamless transition from playing from Roon to playing as an Airplay device from the Apple Music app. Although it is not as high quality, it works.

This this is where Spotify is better. Most streaming devices have Spotify connect and the service is the most popular. Plus you can have a shared friends playlist and all be connect at the same time. AirPlay doesn’t allow that. And for party don’t really need lossless but would be nice if hifi ever comes out.

I literally give them a tablet with a Guest profile.

If they want to use Airplay I switch to the “airplay” input on my DAC. I think your suggestion is overly complicated but also… you could do this…

Entrypoints is a collection of Roon extensions that act as an input to your Roon system. Music from input devices like turntables, cd players and phones can be streamed to Roon zones and can use the Roon specific features like DSP. Entrypoints is the continuation of the development that was done for the CD Player extension. The CD Entrypoint is the improved version of the CD Player, making the latter obsolete. You can read about Entrypoints on its Wiki, make sure to also watch the Introduction…

Yes, it may be complicated in the implementation. But the end goal is to eliminate the complication and improve upon the users experience. What could be more simple than being able to airplay to any zone with nothing more than selecting the zone from a device and having complete control, including music selection, transport and volume control? Again this is not for my personal use as I am totally satisfied with controlling every one of my Roon zones with either Ipad’s Iphones and now thanks to the latest offering, the RooWatch extension.

So where is network security in all this?

an ultimate solution would be the allowance of any Roon endpoints to be turned into Airplay receivers.

This would not be a Roon feature as this capability has nothing to do with Roon. The capability exists already in many endpoint solutions, like the iFi ZEN Stream and any Raspberry Pi running RoPieee or DietPi. Enabling AirPlay on all of my DietPi endpoints was as simple as installing the Shairport Sync app via the dietpi-software command: 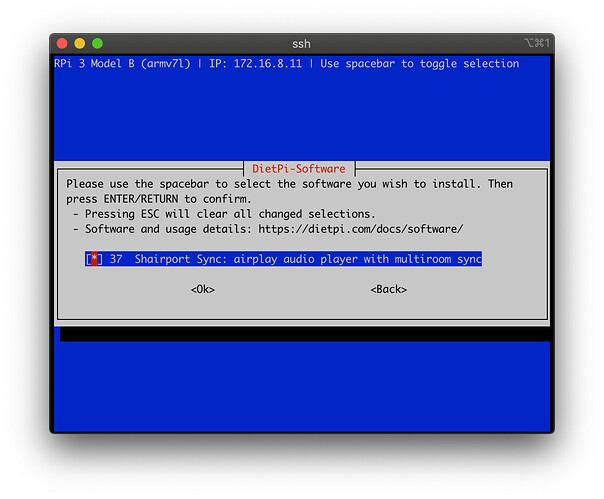 Volume control is managed both in Roon and on the connecting AirPlay device (attenuation is summed). No RS232 required.

If you have endpoints that don’t support AirPlay, the best solution is to reach out to those manufacturers and request this feature or buy different endpoints that support the features you want. I don’t think this is Roon’s problem to solve.

Thanks, I appreciate your input. I have evaluated the various Rasberry Pi solutions including RoPiee, DietPI, Volumio, etc. And agree as an endpoint they work rather well for a very small investment. And would probably be enough for a majority of users. Just to state clearly in no way am I suggesting that this is a Roon problem. Just a Feature Suggestion.

Most of my zones have Meridian Controllers and Speakers. In my case for Airplay to work properly and safely, there are no off-the-shelf solutions that are plug and play. Being this case RS232 control is a necessity due to the way that the volume controls operate and due to having digital inputs instead of conventional analog inputs.

Despite largely using RPi based endpoints that support AirPlay, I’d find this an immensely useful feature.

The fact that (some of us) can use our existing endpoints/streamers to handle AirPlay and/or that you can do this already in a clunky / convoluted way with the Entrypoints extension, doesn’t stop this from being a useful feature for many - especially if implemented well.

I’m not sure I’d agree this is a Non Room issue/request, I guess it depends on how you use Roon. If you use it simply to stream to a single endpoint that also supports AirPlay and you don’t use DSP or volume limits in Roon you probably see little use. If you see Roon more as a central multi room / audio distribution platform then why wouldn’t it be useful if that platform could also distribute external audio sources.

This yet again feels like a feature request that would prove useful to some people - the forums only reflect a tiny (and probably quite self selecting) group of Roons user base - without causing issues for those who didn’t use it, yet the replies instantly jump to gatekeeping (“This isn’t what Roon is”. …says who, is there a written manifesto?), convoluted workarounds (what is wrong with wishing for a well implemented solution instead of a hacky workaround) and negativity (rarely useful or constructive), before the request has even had a chance to be explored.