I have not forgotten about the bugs reported. But between a crazy work scheduled and other social commitments, I just have not had much time lately to look into this.

Finally managed to get Jan’s Roon Extension manager installed and have this Web Controller running now at last.

Finally a use for my poor 2nd class citizen Ipad 2’s to use as minamilst Roon remotes.

Okay this is where you’ll all be sorry for @Jan_Koudijs excellent windows installer, as it allows neophytes like me into the arena. 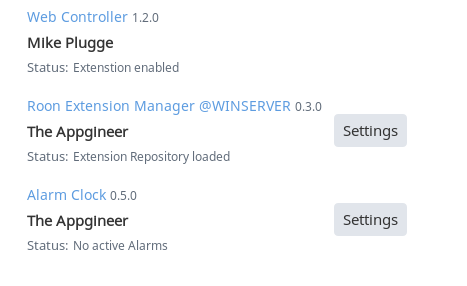 Am I missing something simple, I’m now inputting either localhost:8080 or IP address of core:8080 (on a windows 10 machine) but nothing is displaying.

I’m now inputting either localhost:8080 or IP address of core:8080 (on a windows 10 machine) but nothing is displaying.

Not necessarily the solution, but I think you want the IP address of the device on which the extensions are installed — that could be different from your core. For example, in my setup I have the Core running on a Mac mini, but the extensions are installed on an iMac (1) that’s ergonomically easier to mess around with and (2) doesn’t violate my principle of keeping as much extraneous software as possible off the Core machine.

Thanks but the extensions are installed on my core machine which is the IP address I’m using.

Looks like you have to open port 8080 in the Windows firewall to access the web controller from another device.

How to open firewall ports in Windows 10 - Windows 10

A firewall is an essential aspect of computing and no PC should ever be without one. That’s why Windows has one bundled and active as standard. Windows Firewall occasionally has to be told to le...

Excellent, that works, many thanks.

Now the old iPad will come in useful again.

Just realised that I can use this plug-in to give me a Roon Remote on my Windows Phone - it’s brilliant! @Mike_Plugge - where can I donate?

While I appreciate the offer, for a variety of legal/employment agreement reasons, I cannot accept payment for any code that I write on my own time.

I am glad you find it useful though!

Have Windows running in a VM for a couple of weeks now. Appeared to be a necessity for extension installer developments.

@Mike_Plugge just wondering if you saw my bug report a few post above?
Still hunting me

I did see it. The only way I was able to reproduce it was by simulating a very flaky network. And even then, the network performance was so bad that music playback was affected.

My only suggestion for you would be to make sure the network between your extension and your Roon core is rock solid. WiFi can be flaky if - like me - you have quite a few other WiFi access points in range.

@Mike_Plugge no wifi in my home. Not for my roon endpoints at least.
The web app is running on the same server as the roon core which I have no issues with and is 10GigE Ethernet.

Ill keep looking to what the issue is. This does not manifest on my home only. At work and my Vacation home too.

I am not sure what to say then. The only way I was able to duplicate this was with bad network connectivity. Have you tried a clean install of the web controller or updating all of your node modules? (grasping at straws here…)

I am not sure what to say then. The only way I was able to duplicate this was with bad network connectivity. Have you tried a clean install of the web controller or updating all of your node modules? (grasping at straws here…)

That’s what I am shooting for right now

Roon build 262 should have a fix for the disappearing zones after zone transfer problem here. We were sending a single message with same zones being both added and removed, which caused a bug in several extensions.

Thanks for your help on this one @ben! You did a lot of the work to find that weird message, so I am definitely grateful.

@Jan_Koudijs FYI - looks like the 262 release of Roon will address the zone transfer issue you identified.

I updated to build 262 and it gives some improvement but it is not solved.

After the transfer it is reported that there is nothing playing. If I then select the zone name the zone remains listed (it disappeared previously). By selecting the zone to which playback transferred also that zone reports that there is nothing playing. Also after transferring playback back to the initial zone this state remains, no control possible for the two zones that were part of the transfer.