I see a number of composer that aren’t retrieved in Roon DB (with pictures and bio, etc.) although their names are properly spelled in the composer tags of the concerned files.
For example, see below the pictures of an album that contains both a composition from Carl Maria von Weber and another from Paul Hindemith.
Paul Hindemith gets properly recognized, but Carl Maria von Weber appears as if it were unknown from Roon (although it is, of course, well known with its bio, picture and so forth). I see no difference in the spelling whatsoever.
What would explain this issue that I could get fixed somehow ? 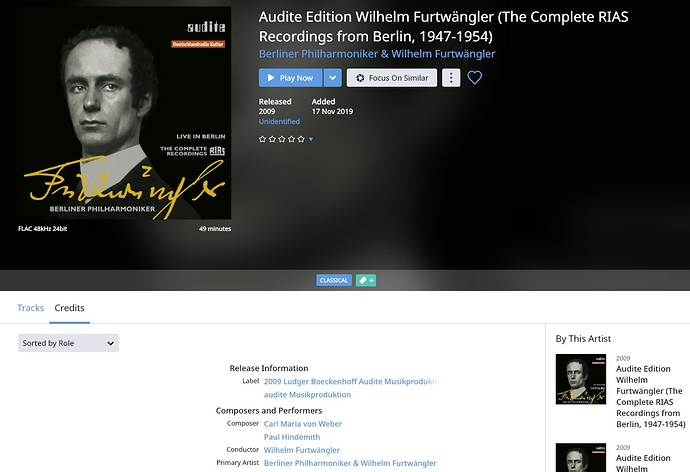 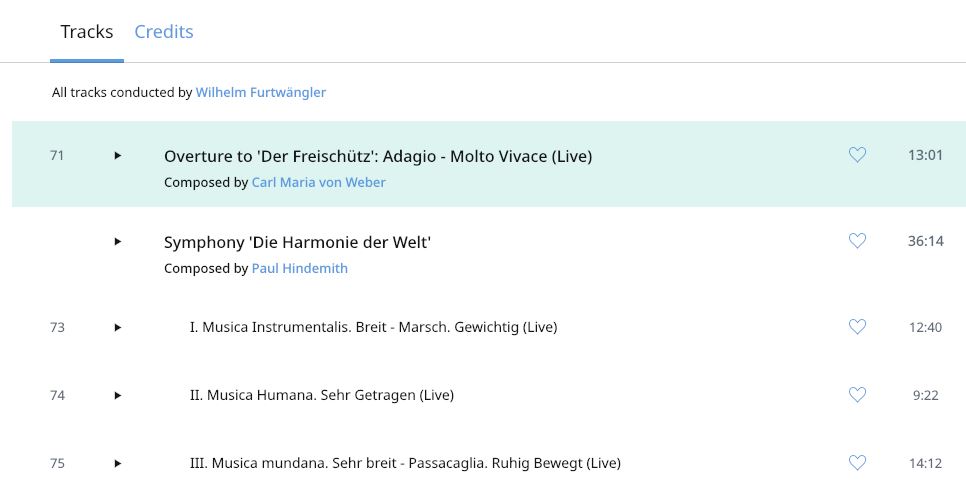 This is a simple one. You should reassemble the complete album of 13CDs and then Roon will identify it. You will get performance dates and venues, full composer information (your specific query) and a review: 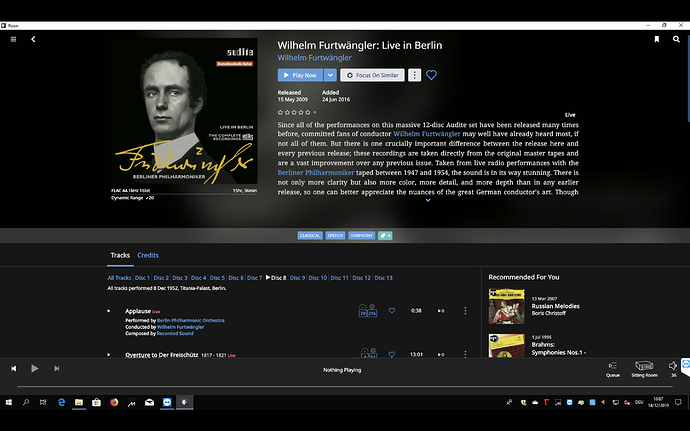 What’s going on with the missing applause tracks, the weird track numbers and the splitting into separate discs? That will have made Roon’s work well-neigh impossible.

Did you buy this as a download? Or did you do the mangling yourself?

If you put in disc/track numbers matching the CDs, Roon will do the rest. See here for the information you need:

In those cases where an album is truly unidentifiable and you don’t already have the composers in your database, Roon will not fetch them. Not an issue, just design. Ask again next time and I can tell you the workaround. But for now go fix this wonderful Furtwängler set!

Thanks for the hint.

Well, I did the mangling myself long before I adopted Roon a few weeks ago. And I also got rid of the applause (that I do enjoy at the concert, better than in living room

) …
For some other situations, the composer came up magically once I re-identified the album ; but there are many other cases in my records so I am really interested in the workaround if it differs.

I am really interested in the workaround if it differs.

I do this quite a lot although it’s a pain.

Well, this is a very good workaround, much simpler than mangling back the albums. Many thanks.

Roon will not fetch them. Not an issue, just design

Why is this by design? It does not make sense to me! Maybe I should post a feature request?
Or has someone else already done that?

Go ahead and do a feature request here. (I haven’t.)

As to why, I don’t know. Roon seems to have started out in the hope that basically “enough” CDs will be identifiable and didn’t bother with features like this which apply only to unidentified CDs. But after some time they included better features for user tags which seems to indicate a change of attitude. But this is a very broad supposition. It doesn’t matter Why they haven’t done it, we just need them to do it. Please.

It’s also true that in many cases in the forum, the album is unidentified due to user error, which is why the stuff isn’t fetched.