Roon is acting very funny and it's becoming frustrating

First, Roon ROCK can not backup to my mac mini.
Second, Roon is sometimes not playing some of my songs from an iTunes folder on my NAS. “Failed to load”.
Now, ROCK is freezing on my NUC and says it waiting for the Remote Core. When I access my NUC it says:

The only one to restart the NUC is to unplugged it as the power button doesn’t unfreeze it.

Someone, please help, especially on the last one.

I’m sorry to say, but that’s a Linux (ROCK) error indicating filesystem corruption, possibly from a hardware fault, such as a failing SSD. To translate: EXT4 is the name of the default Linux filesystem format; “nume0n1p4” is the Linux device name for an internal disk (I assume SSD) partition; “extent” is EXT4 lingo for a chunk of a file; “Unwritten extents” as updated file chunks buffered in main memory before being written to disk; “inode” is Linux lingo for the on-disk data structure that specifies the extents used by the file (simplifying a bit). TL; DR something is impeding correct file system operations, leading to corruption of some files, which of course will cause all sorts of problems. Your internal SSD may well be on its way out

I don’t think I have a SSD in there, just memory, as I was just running it as a Roon endpoint before.

You must have some internal secondary storage, which is required for the operating system and Roon’s database. The “numen0n1” string on your initial post is probably actually a typo for “nvme0n1”; NVMe is a standard for “non-volatile memory” aka SSD. A typical NUC has slots for main memory and for secondary memory. For example, the NUC I have here has 8GB of main memory stick on one of its two DIMM slots, and a 250GB M.2 SSD on the secondary memory slot.

Yes. I thought you meant a SSD Sata drive. Yes I have 128gb stick. Is that what is failing? If I replace it how do I reinstall ROCK from saved version? 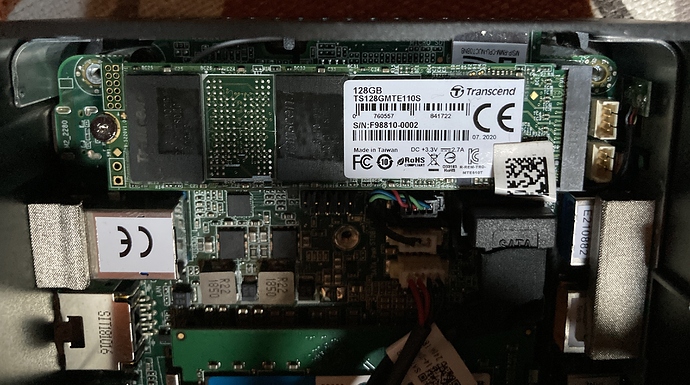 There could be other reasons for the errors besides secondary memory failure, but there are good discussions elsewhere on this forum about ROCK SSD issues, including some with Transcend memory sticks, so your best bet is to look at those, for instance Transcend 256GB SSD failed? [resolved]. I don’t run ROCK myself, but rather other Linux-based server setups, so I don’t have specific instructions on how to confirm the problem. You could of course get another SSD stick, install ROCK, and restore your Roon database from backup as if you were migrating to a new ROCK: https://help.roonlabs.com/portal/en/kb/articles/migrating-to-rock.

These Transcend M.2 are failing consistently.

You’re not the first nor the last to have one of these M.2s go south.

I rebooted and reinstalled ROCK. See if that is the real problem, but I did order a new SSD card. This time from Crucial. It should arrive by Tuesday.