Roon is no longer organizing my music?

First I would like to note that all of my music is showing up perfectly in Roon, no issues at all.

But i noticed that Roon does not organize my music files anymore. I run a roonserver and a few clients. I usually import music by dragging it to the client app on my Mac and Roon then copies the files to the music library. After importing I would expect Roon to create artist/albums folders and move the music files there, but they just stay in the folder “Roon Imports”. They show up correctly in Roon, but I would like to also have them sorted in the library so i can find them easily, if need be. Roon used to do this. What happened?

Did Roon remove the organized folder feature? Or do I have to enable it somehow?

Yes, Organized Folders were removed in 1.3, as mentioned here:

Organized Folders are no longer part of the product

Well thats a shame, Now i have to sort it manually which I don’t want to do.

I get that if I manually copy a folder I might not want Roon to change anything, but when using Roon’s built in importer, shouldn’t there be just a litlle degree of sorting?

Basically, as things are now, if I create a new library and drag all my music into Roon I will have a library with just one folder (Roon imports). Shouldn’t I at least get the option to organize the files?

Had i known this going in, I would NOT have purchased a Roon license and if it stays this way, I probably will not renew the license. I need a library i can browse, not a blackhole of files and metadata that only Roon understands.

You could create multiple folders and drag the appropriate files to those folders and then add them to Roon via the storage tab, if you want to?

what you can do as a “work around”: export your entire library, by this way everything is sorted: /artist/album/tracks and includes most of the Roon metadata

Yes, but the point is that I have to create all those folders myself, a thing Roon used to handle for me.
I do not want to have to do ANY manual labor in regards to sorting the library, Roon should handle that.

I feel like the Roon crew gave up on creating a good library manager and abandoned the project of organized folders, but left behind features in Roon (like the import function) that used to work in tandem with organized folder feature and not explaining that these features now work differently.

I did not notice this until my Roon Imports folder was 50GB in size.

That a good idea, to get it back to it’s original state, but does unfortunately not solve the problem going forward. I would still have to add files manually in the future or let Roon dump everything in the Roon Imports folder.

Basically, as things are now, if I create a new library and drag all my music into Roon I will have a library with just one folder (Roon imports). Shouldn’t I at least get the option to organize the files?

How do you figure this…surely your albums are stored in discrete folders, however named?

This is how my roon imports folder looks now, the folders next to it were all created by Roon before 1.3 update was released. Everything imported since then looks like you see below. 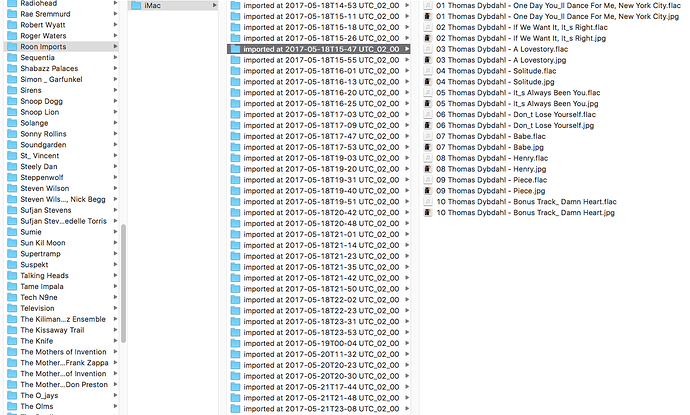 I’m now using @fschmeis suggestion and exporting the library to a new folder. This will restore my library structure. It seems that when exporting Roon creates artist/album subfolders like a champ, so it already knows how.

How about a feature in the library section, next to the clean up button called “Organize”?
Pressing it would organize the library folder the same way the export feature does when exporting. (with a prompt warning the user about what they’re up to)

How are you “importing” music into Roon v’s adding same to a watched folder?

I add music by dragging and dropping music files onto the Roon Interface on my Mac and Roon then copies the files to the NAS. (Roon Server is on Linux)
Prior to 1.3 Roon would organize the files after copy (like iTunes does).

I would still have to sort it manually on the NAS. I would also have to mount the share with the music on my Mac. All things I didn’t have to do prior to 1.3. Back then Roon just handled all that automagically.

Many users were unhappy with Roon reorganising their music collections as the results were often not in line with their expectations. Given feedback from users and the complexity involved in trying to perfect something like that (so many variables) the Roon team made a decision to remove that functionality. I don’t think it’s coming back and I think it’s the right decision. Mounting a share from your MAC shouldn’t be a big deal.

It’d also be very simple to point a tag editor to the imported folders and rename them using tag metadata (assuming of course you actually have metadata given Roon’s metadata automagically takes care of that too).

I understand, I’m just in the other boat. I knew what organized folders did and was very happy with it. I have a few clients in the household and liked the fact that we could all just drop music onto Roon and it would copy to the server, no management required. I do however understand that I’m probably the minority here.

I would be nice though, to see Roons built in importer offer some more options. Maybe a feature like iTunes import folder where music is first analyzed in the import folder then copied to the destination (in the library) and then verified and deleted from the import folder.

For now I have set up 2 folders, one that’s empty and one with the library.
When importing through the Roon interface I’m given the choice of import location, so I choose the empty folder and import. I then export the album to my library folder and delete the other one from the import folder. This is a bit of work, but it works pretty well.

Your suggestion to use a tag editor to organize the files seems quicker since i save the export step. Can you recommend a good one for Mac?

Your suggestion to use a tag editor to organize the files seems quicker since i save the export step. Can you recommend a good one for Mac?

Sorry, I’m a Linux user so I’ve virtually no understanding of the MAC ecosystem. A quick search on the forum for taggers should yield what you’re after.

I use Linux (Debian) on all my other computers, so if the best tag editor is on Linux that’s not a problem, any suggestions are welcome.

For now I have set up 2 folders, one that’s empty and one with the library.When importing through the Roon interface I’m given the choice of import location, so I choose the empty folder and import. I then export the album to my library folder and delete the other one from the import folder. This is a bit of work, but it it works pretty well.