Entire groups of albums, for example: 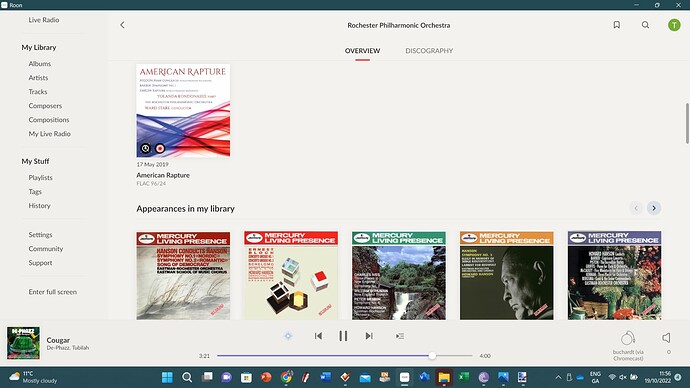 Yes, all of them.

Yes, all of them.

Occurs with both, local and Qobuz albums.

These are the relevant import settings: 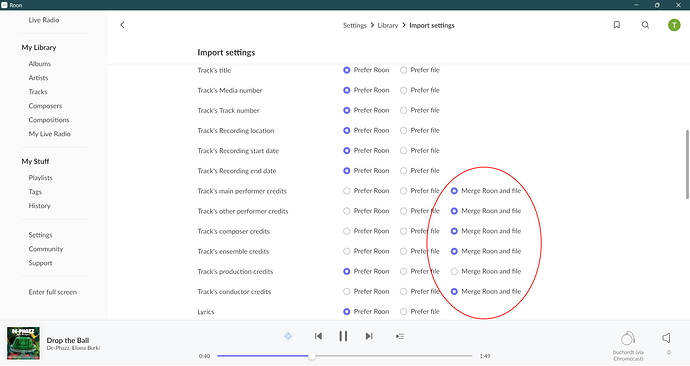 I have my track import set to both roon and file. This way where my tags miss artist credits roon completes them, and where roon misses artist credits, my tags complete them.

However where roon has got the artist credits wrong I remove them so only my artist credits remain. The problem is that in several screens roon will still display as if the roon credits still exist. My removing the bad credits does not result in what I would consider expected behaviour. This is especially noticeable where one or more of roon’s meta-data suppliers or roon itself is getting the equivalencing wrong. For example, in the above example the orchestras “Rochester Philharmonic Orchestra” and “Eastman-Rochester Orchestra” are two different orchestras. Both have many equivalents so it can be confusing. Essentially, one is a “pops” orchestra and the other is a “serious” orchestra.

To me, removing the credit means removing the credit. This is just an example. As far as I can see, roon will retain a notion of “appearance” for all artists throughout both local and streamed content despite removing the credits. This “Eastman” scenario seems to be quite common in the US. Another example is mixing up the Boston Symphony with the Boston “Pops”. But the point is that surely roon should be removing all references to the credit when a request is made to remove it? It is really annoying in shuffles where I would expect shuffling Rochester Philharmonic to create a cmpletely different vibe to shuffling Eastman-Rochester. I haven’t really checked but it may also be a contributory factor to sometimes disappointing radio streams where despite a lot of re-tagging of credits, orchestras with completely different programming traditions are mixed up.

I’m not quite sure what you mean by Roon tags.
But your post shows Roon’s global import settings.
Have you tried setting metadata preferences for the individual albums that are giving you trouble? 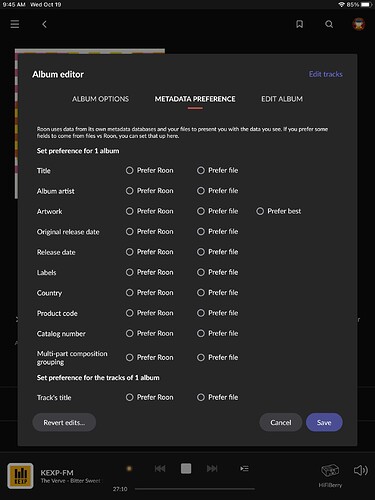 After lengthy experience I have just set the global import settings that way as causing me the least editing effort. I have tried all sorts of variations of the global settings and do on occasion just as you suggest set the metadata preferences on a case by case basis depending on albums.

I don’t want to set the global import to roon or to file. I want to set it to both for no other reason than I have found over the years that in general (there are exceptions) it creates the least possible metadata editing effort when importing albums. However, as in the example above where roon has got it wrong I will need to remove bad roon artist credits. This is not an isolated example. My database is riddled with examples where I have removed incorrect roon artist credits. However, it would seem that even if I remove a roon credit, that roon retains a “memory” of it somehow and that it will use that credit to build “appearance” screens and possibly in other parts of roon. Maybe radio. I don’t know.

Maybe @support could add some insight?

I’m not quite sure what you mean by Roon tags.

Sorry. Got that wrong. I meant roon credits. I have corrected my posts above so I hope there is no confusion. So in the example above, at least one of roon’s meta-data suppliers or roon’s own equivalencing engine is crediting Hanson with conducting the Rochester Philharmonic Orchestra instead of the Eastman-Rochester Orchestra. This is far from an isolated example. What I am able to do is remove the roon credit and/or add my own.

So for example here, I have unticked “Rochester Philharmonic Orchestra” from the credits and added my own “Eastman-Rochester Orchestra” credit: 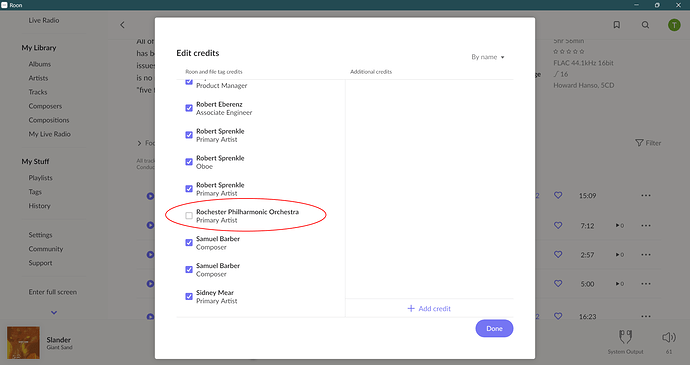 That removes the album from the list of “real” albums where Rochester Philharmonic Orchestra is the artist but adds it to the appearances list! 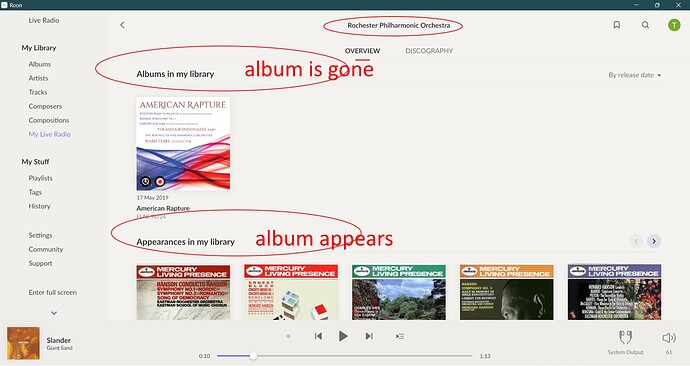 It’s annoying enough in terms of navigation but my greater concern is that it also bleeds through into playback and recommendations. This is an example where the programming of the Rochester Philharmonic and the Eastman-Rochester are very different and I would expect to see that reflected in all sorts of scenarios. For example, shuffling, recommendations, radio, if you like X then you will like Y etc., etc.