Apologies if there’s a better sub-form for this (mods - feel free to move if necessary).

I wanted to gauge some pros and cons of running Roon on something like a Linux Mint install vs a dedicated ROCK install?

Do you want to do anything on your install other than simply run Roon? ROCK is supported and updated and works very well. The only reason I would consider running Roon on anything other than ROCK is if I wanted to do more with the device or if ROCK wasn’t fully compatible with my hardware. Ultimately ROCK costs nothing to try so you can just try it.

I think the difference is extensions, rock doesn’t support them. But then, rock is extremely easy to install, setup and use. I don’t need/use extensions, or anything else on my Roon server, so rock is perfect for me.

ROCK is maintenance free. Used to use Vortexbox which is based on a very stripped down Fedora but would never switch back now love ROCK.

Hey guys, so thanks for your helpful and prompt replies

Here’s where I am: I’ve been a user of a Squeezebox Touch and LMS for a number of years. With respect to the latter, considering its age it’s ok and the fact that it’s still being updated after Logitech pulled the plug all those years ago is something of a miracle. Problem is, the UI is very outdated and it’s not the slickest experience running on my now-ancient ReadyNAS NV!

Roon is obviously a completely different proposition but I think that part of its USP is how it integrates your own content with that of streaming services of which I’ve only ever dabbled with trials because I’ve found that once the novelty wears off I get frustrated by the music that isn’t on there rather than enjoying what is! To that end I’m not yet 100% convinced I can justify the significant outlay for what admittedly seems to be an outstanding product.

So my thinking was that if I was to buy an Intel NUC and install Linux Mint, if I decided against buying Roon in the immediate term that it could run LMS and to better effect than my ReadyNAS…

Having come from using LMS since 2005 to Roon and running Linux as my OS of choice since the 90s I think your choice of platform would be fine. Installing a Linux flavour like Mint on a PC is a 5 minute doddle these days so rather than burden your Roon Core host with a lot of unnecessary processes consuming computing resource I’d install ROCK. If you later decide against Roon it’s a quick install of Mint assuming you want a Linux desktop, failing which I’d opt for Debian or Ubuntu server if the pc’s only purpose will be to run LMS.

ROCK is too locked down for my tastes. If anything goes wrong, you have zero ability to troubleshoot, since you can’t get even a non-privledged login on it. Personally, I use CentOS 7 for my Roon Core system. But I’ve been admining Unix for 25+ years, so I’m comfortable with managing Linux systems myself…

Thanks again for all the replies.

Were I to go with Rock, would any drives connected directly be accessible on the network? In other words could I use my Windows PC to mount as a network drive and send files across?

Yes, but you may need to tell Windows 10 to use the SMB v1 protocol to access the ROCK NUC.

Thanks - I think I already had to do that in order to continue connecting to my ancient NAS!

And this is a perfect example of the kind of thing you can’t fix when running ROCK, but can configure SAMBA correctly if you run a regular distribution.

I really don’t care. ROCK does what it says on the tin for me. I’ve done enough faffing about with operating systems to appreciate the simplicity of an appliance.

Just installed Ubuntu 18 lms and roon, on a NUC… very impressed so far

Actually that is overcoming a limitation or restriction of Windows. It isn’t ‘fixing’ the Roon installation. Of course this is largely semantics but it pitches the relatively narrow appeal of a Linux install against the broader appeal of an appliance like build that just sits there and does the relatively few things it is supposed to do like a boss.

It is a closed OS without any access (via SSH or command line) necessary to install third-party programs.
It is not possible to control the operation of the system using utilities (for example, htop, sensors, cpu, etc.)
It is not possible to connect more than one internal drive (HDD / SSD) for the library.
There is no possibility to use a disk with already recorded audio files for the library on the internal drive (only an empty disk can be used).

I first used ROCK for Roon Server on my NUC (see my profile), which I refused due to the above reasons and extreme slowness when working with Qobuz and Tidal, then with the success of Ubuntu Server and now switched to DietPi for Native PC 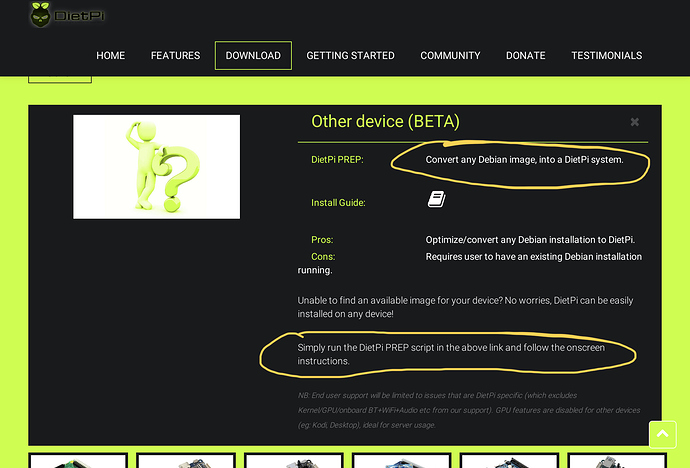 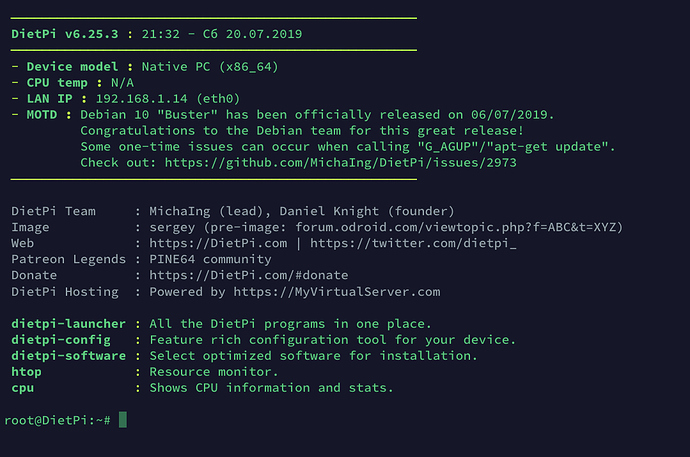 You don’t use ROCK in order to do any thing other than to sit there and work. That is what it was meant to do, and it meets that narrow requirement. I kind of went the other way. I started with Widows and Ubuntu Server builds. During that time I utilised all of the functionality to observe the performance of the hardware, heat, traffic, storage usage etc. I satisfied myself that the hardware was up to the task and I then switched to ROCK when it launched, in the knowledge nothing adverse was going on using Roon. For those who need to do more or even in your case exert your control in order to do what you may perceive as less, the alternatives are there. And Diet Pi for PC is a great option as an alternative way to do things.

I have two absolutely identical system disks - ROCK is installed on one, Ubuntu server or DietPi (now) is installed on the other. When I install the ROCK system disk in my NUC and try to access the Tidal or Qobuz sections in the Roon interface on my iPad pro, I only see the animated Roon labs logo for a long time (I often don’t wait for the change of this wonderful logo picture and turn off the NUC) . When I install the second system disk with Ubuntu / DietPi (without changing anything at all!) Tidal and Qobuz work without any delays! (I believe that you have no doubt that ROCK is to blame for everything).
That s what’s wrong with ROCK.

That’s what’s wrong with ROCK for you. I have no such problems, and I am pretty sure if it were the case generally the noise from ROCK and Nucleus users would be deafening. Now that doesn’t excuse the issues you have, but it does mean the issues you are having are not necessarily universal. So I suppose the next step would be to poll the membership to see if there is a ROCK/Nucleus related performance issue that is going under the radar if it matters. That said, other postings you have made do suggest you have an issue with the closed nature of ROCK. So fixing would not necessarily bring you or users with your needs back into the fold.
My hardware builds were:
i5 5th gen NUC, passively cooled. OS’s Windows, Ubuntu Server, ROCK.
i7 8th gen MOCK build, H310M-ITX, passively cooled, OS ROCK.