I hate to be so label conscious, but I find almost any Brit music on Chandos in the 80s and 90s to be quite excellent, especially if you’re interested in pastoral moods. A lovely and compelling release I couldn’t stop listening to was Bridge’s Suite for String Orchestra paired with John Ireland’s Downland Suite and played by the ECO under David Garforth. 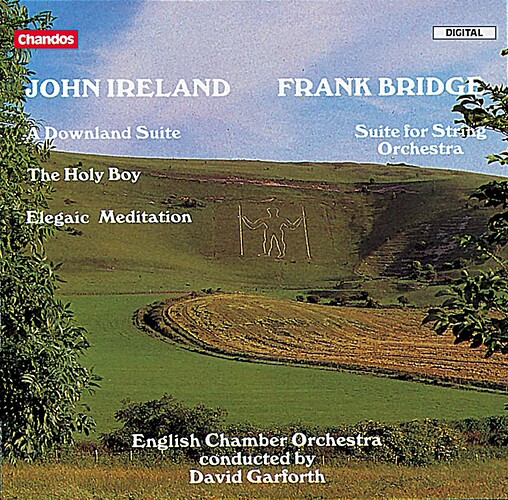 I’ve always been interested in classical music, my father having been a staunch Bach freak. I started collecting seriously in the 70s and 80s when I became disillusioned with mainstream pop/rock. Argerich and Baremboim were particularly of interest to me in the early days, both being Argentine as am I. Through them I discovered du Pré, Perahia, Perlman and so many others.
But now with Roon I am discovering so much more and what has struck me is the number of stunning young, compared with me, musicians making waves in the classical world. Hugely exciting.
If you haven’t come across the Icelandic pianistVíkingur Olafsson yet I encourage you to have a listen to his recordings with Deutschegramaphone. 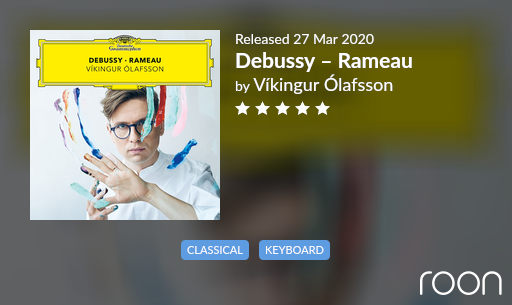 Thank you @Gimlet . I first discovered Bernard Haitink at conservatory in the ‘80s, and have listened to a lot of his Beethoven, Mahler, and Bruckner over the years. But, interestingly, my favorite Haitink recordings remain those he made of Debussy… just magical. 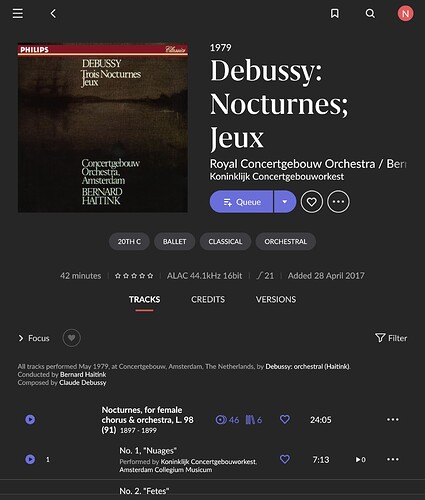 Thanks for reminding me - I already had the splendid Philips Duo of Haitink’s Debussy recordings on Roon, and spent an enjoyable morning of rediscovery. As you say, Haitink’s interpretation is absolutely magical, and his orchestra (the Concertgebouw, of course) provide a consistently subtle and refined performance.

On the subject of Debussy, I then remembered the Harmonia Mundi Debussy set (10 CDs) issued in 2018 to mark Debussy’s centenary, all of which I can recommend. I have now tagged them as a group in Roon for regular listening, but will also share a few Tidal and Qobuz links for anyone else who loves Debussy’s music. Perhaps not as refined as Haitink’s approach, but Melnikov, Lugansky et al provide some riveting performances. It’s all available on both Tidal and Qobuz, at least in my country. 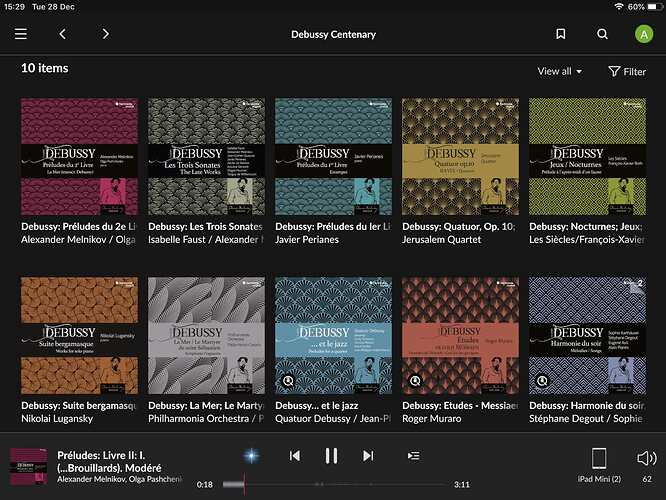 I, too, have enjoyed this harmonia mundi collection, with the sonatas + piano duo recordings being the ones I have returned to most often. Other Debussy I have particularly enjoyed include Ogawa’s Debussy traversal on BIS and an early Quatour Ebene version of the spectacular string quartet. 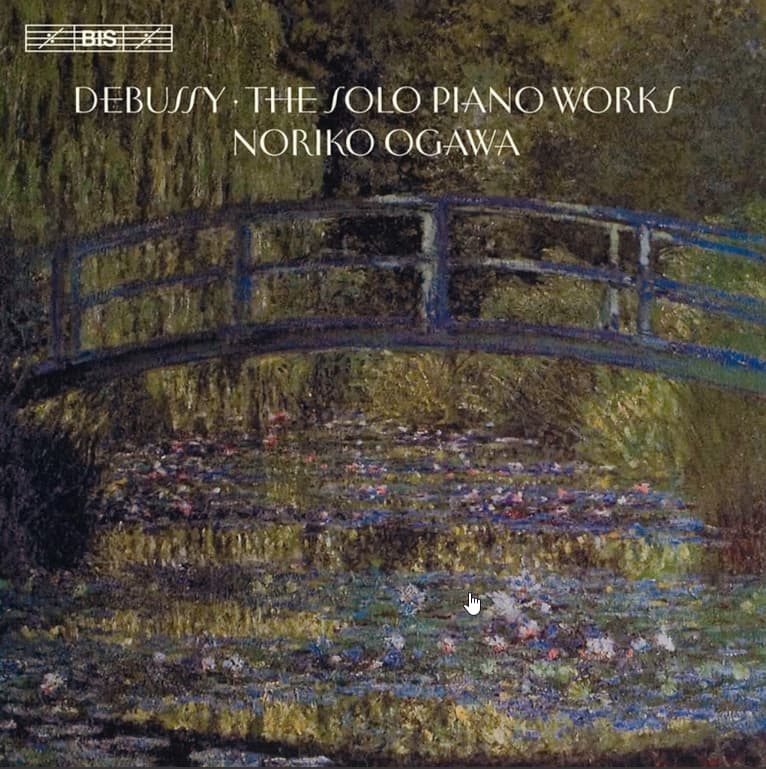 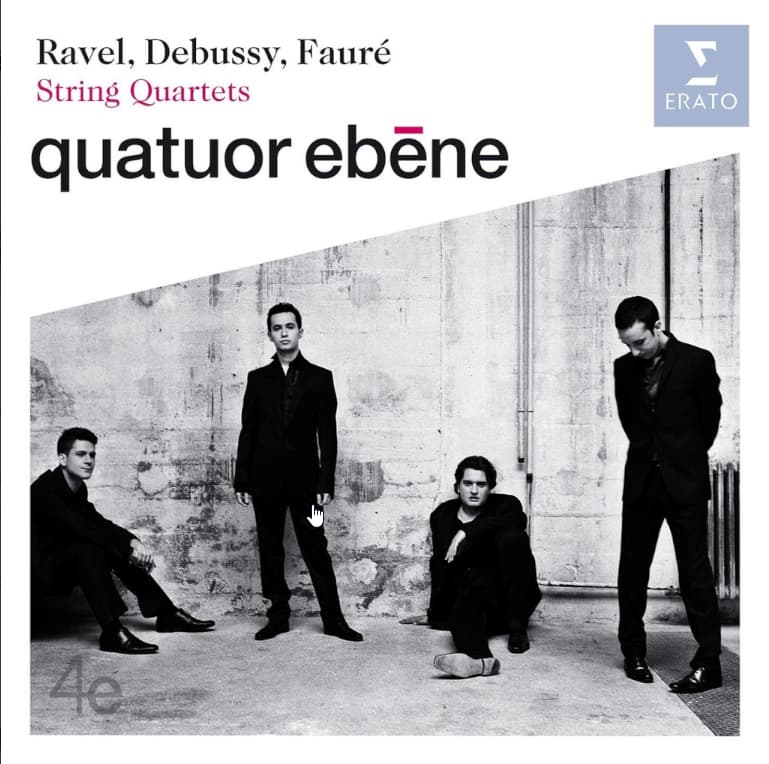 I assume you were just taking time off for the holidays, rather than purposefully ignoring my commentary and request. Have you had a chance to review these ideas internally?

In the meantime, one other “glitch” (some may say highlight) showed up on “West Side Story”: a horizontal band of dark grey. [Sorry, I could not coax a screenshot from Roon on this.]

Both are excellent recordings - thanks for reminding me of the wonderful Noriko Ogawa, who deserves a much higher profile as a pianist and interpreter of Debussy and others. Great listening and something of an antidote to excessive Christmas Music!

After “Dry January”, we deserve some musical celebrations to liven up February. I can recommend an under-recognised composer who often reminds me of champagne - innovative, fizzy, explosive and always enjoyable. C.P.E. Bach was one of the great J.S. Bach’s sons, and inspired both Haydn and Mozart, even though he wasn’t as famous in his own time as his brother, J.C. Bach.

BBC R3 featured him recently as Composer of the Week (still available on BBC Sounds), and I have spent the last few days listening to his sonatas and concertos - all of which are fantastic! Totally unlike his father, and some of his innovations are closer to Beethoven than Mozart. Some recommendations are below - a mixture of modern and original instruments, but all played with the vivacity and brio this music needs. Enjoy - there is much more music to discover… 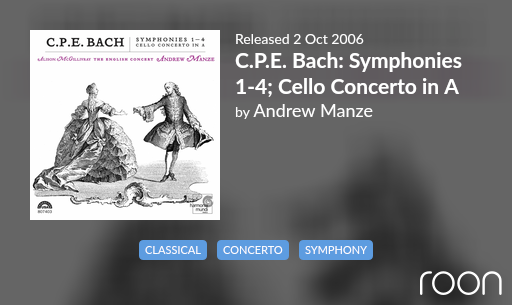 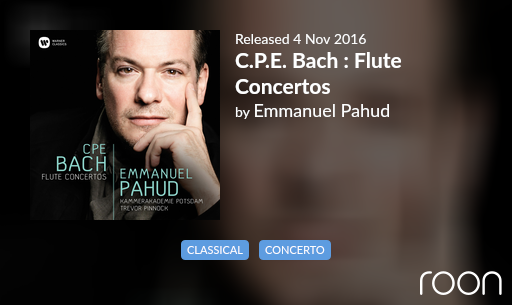 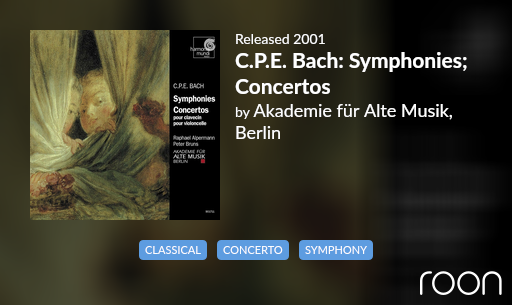 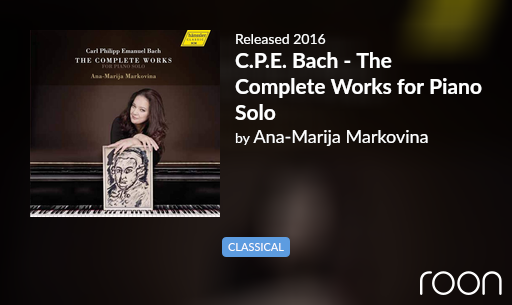 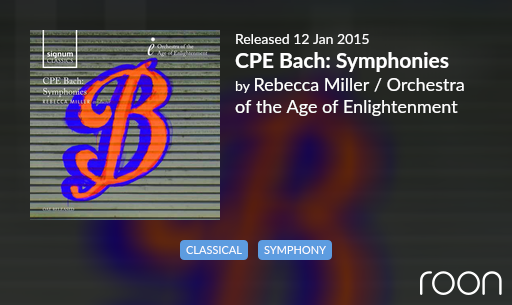 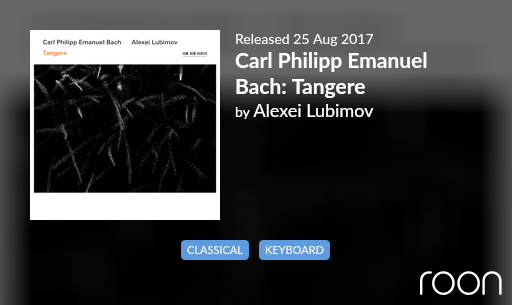 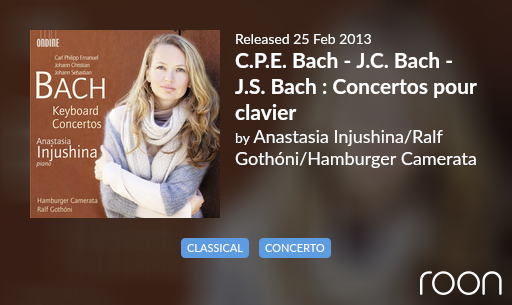 Yes, C.P.E. Bach is still underrated, although recently there have been quite a few excellent recordings of his music.
Here are some of my favourite recordings. 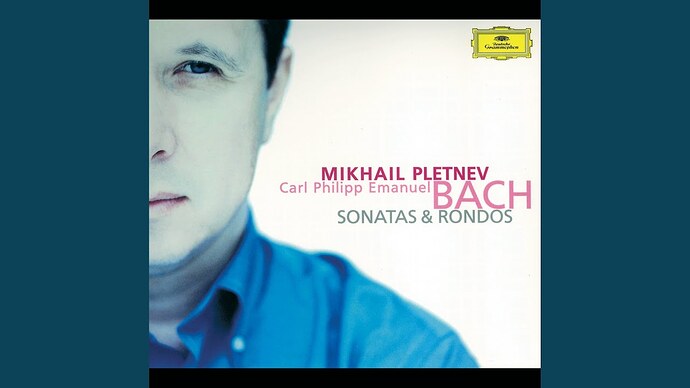 To me these interpretations are far superior to Markovina’s. Hamelin, unfortunately, is not available through streaming (Hyperion). 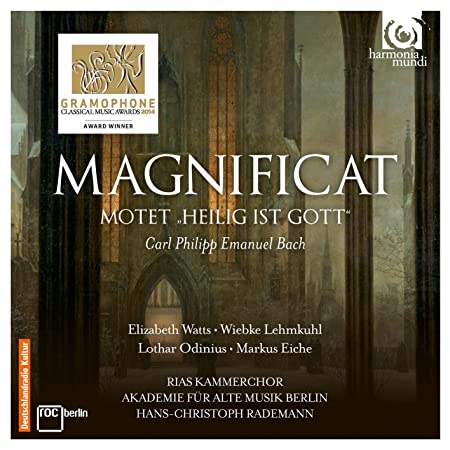 Rademann is an absolute must. Also check out his interpretations of Heinichen. 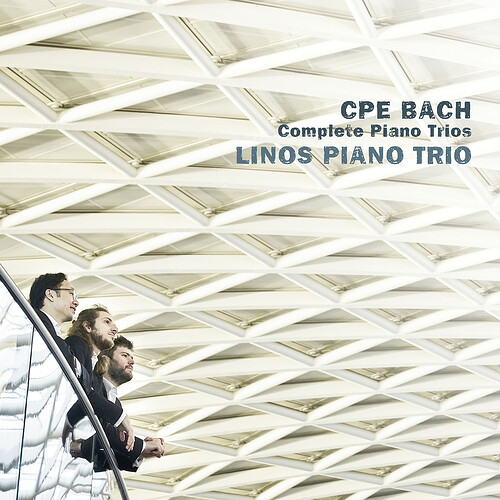 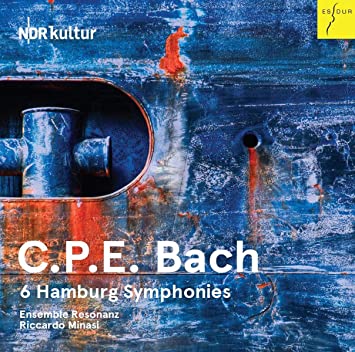 The most explosive and dramatic interpretation of the symphonies. 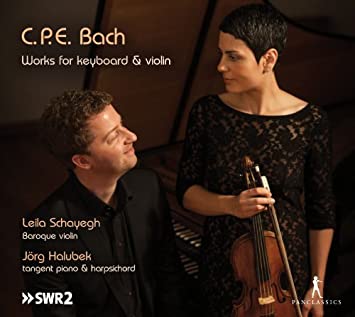 Rademann is an absolute must

I concur regarding the Rademann – absolutely spectacular.

Thanks - all fantastic recommendations, and I also concur on the Rademann. Just managed to listen to the Hamelin and was really impressed. I already owned some of his Liszt and Busoni recordings - what an amazingly talented pianist and interpreter he is. One final chamber music recommendation from the excellent Alpha label. Unusual chamber group and a great name! 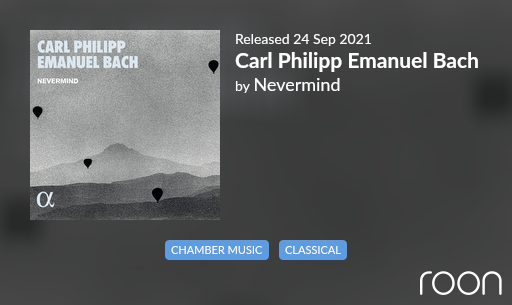 Nevermind is an interesting ensemble. Their harpsichordist in Jean Rondeau!
They’ve also done some very nice Telemann as well as some more obscure French Baroque composers.
Thanks for the Pahud tip – a great recording indeed. 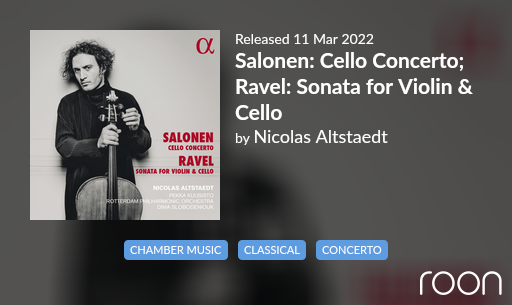 Thanks for the recommendation. The sound quality on this recording is really outstanding, and it seems that Salonen is becoming a more tonal (or micro-tonal) composer as he gets older, at least to my ears. Really interesting music and both the soloist and the sound engineer deserve praise.

On a completely different note, I have recently rediscovered Vivaldi through the Naive label, which is issuing a new edition of his works, most of which are still completely unknown. I was in the generation that was bored to tears by the innumerable “muzak” recordings of the “Four Seasons”, in the 70s and 80s, so this has really re-opened my mind and ears. Definitely not “safe” recordings - the speed and attack of the vocalists, conductors and musicians is remarkable.

Including baroque stars like Rinaldo Alessandrini, Ottavio Dantone, Sara Mingardo, Sandrine Piau and many others, there are at least 67 recordings in the series so far, and they are still going! I have tagged a selection for regular listening - see below 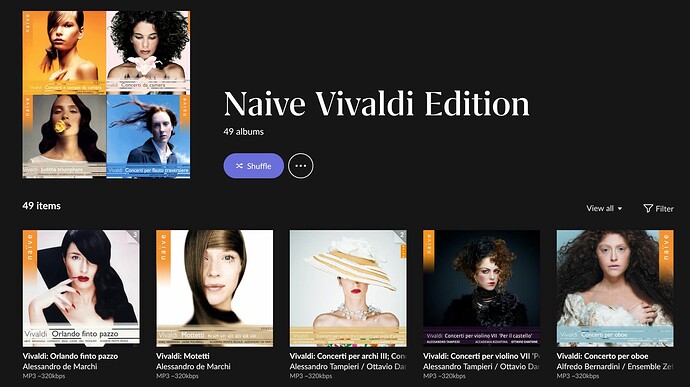 As requested in a previous post, here are the Tidal and Qobuz urls for the first CD in the Naive Vivaldi series - Enjoy! 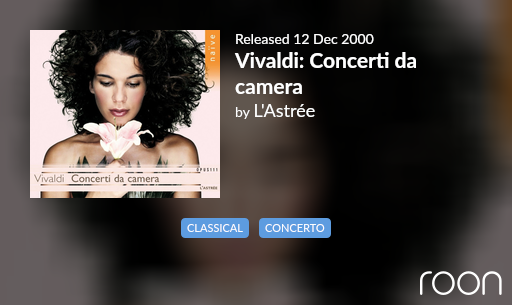 Thanks for the Rademann tip. Magnificent! 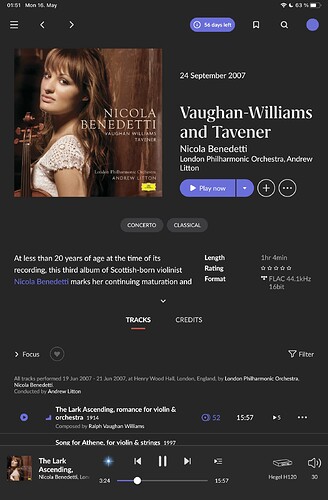 Frédéric Bednarz is a Canadian violinist. He received the Prix d'Europe in 1996. Bednarz was also a top prize laureate at international competitions in Italy. Bednarz studied with Oleh Krysa at the Eastman School of Music, Sergiu Schwartz at the Harid Conservatory and Victor Tretiakov in France. Frédéric Bednarz is active as a soloist and chamber musician. His wide range of repertoire and his sensitive and keen musicianship have been praised by critics. As a soloist, he has played with l'Orches...

My beloved Roon has a few days quirks and does not work flawlessly. Until it runs better again I use Foobar2000 which also runs on Linux, Android and in the Apple world for those wonderful sounds: 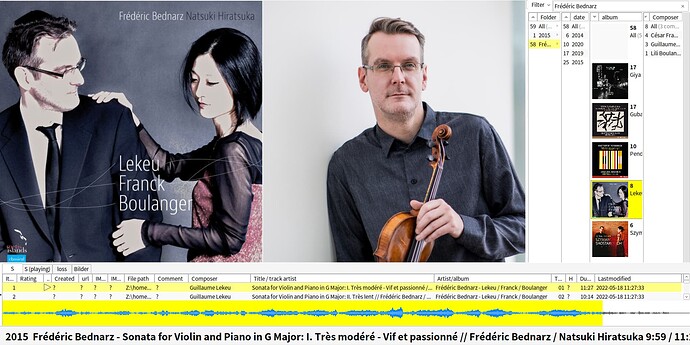 at the piano is: