Roon Music Blog: Get Back to The Beatles with Roon!

Get Back to The Beatles with Roon:

The last few months have been an interesting time for 60s music fans. After all, how often do we see a decades-old sour story about a band or album evolve in such a way that history, and our beliefs, are permanently reconstructed? Rarely. All the more so when it involves a band like The Beatles and their final (released) studio album Let it Be. When it comes to Beatle lore, the icey saga of Let it Be was chiseled into stone as cold as the West London film studio where the band that created The 60s had allegedly unraveled. Those of us who saw the original film remember what it was like all too well. Dreadful stuff: frustrated and agitated Beatles bickering with each other. It was memorable for all the wrong reasons. I, like many Beatles fans, was certain that it would never see an expanded reissue, let alone a deluxe treatment. The album title itself seemed to confirm it!

And yet, the word got out that they were doing just that. A multi-disc box set was released last October, and about a month later there they were, in restored color, for Get Back - a three-part documentary series. It’s been absolutely dizzying, mesmerizing, and revelatory to witness. Still a bit uncomfortable to watch, in places, but, on the whole, a complete regenesis with plenty of musical and brotherly love. It’s certainly the most revealing and most human vista we’ve ever gotten of them. Seeing the Rooftop Concert in its triumphant entirety had me immediately Focusing on the Fab corner of my Roon Library, and I wasn’t the only one.

Roon, as a microcosm, reflected the impact those releases had on dedicated fans and curious onlookers alike. Within days, The Beatles were the most listened-to band in Roon. Admittedly, they’re never too far outside the top ten anyhow; but, as John Lennon once said, they were toppermost of the poppermost again. It was easy to understand why, the Let it Be Super Deluxe Set remastering is very tastefully done, and sonically rewarding - as expected. But it’s the twenty seven previously unreleased studio jams, outtakes, and rehearsals that provide a fascinating wellspring of ‘what-ifs’. What if All Things Must Pass had been born with three Beatle voices instead of just George’s alone? What if John Lennon’s brooding broadside Gimme Some Truth had landed on Let it Be instead of kicking off side two of Imagine?! What if Glyn Johns’ raw mixes had emerged as the finished product instead of Phil Spector’s strings and high sheen approach? The head swims, and those are just a few of many questions the set spawns! And it would be rude not to take a moment to just say the words, “thank you Billy Preston”, and smile. His contribution was such a transformational force in the entire proceedings.

The Roon ripples reverberated from Let it Be into the other Super Deluxe sets in the band’s reissue roster. Abbey Road, The Beatles (aka The White Album), and Sgt. Pepper’s Lonely Hearts Club Band were getting a lot of residual play time on customer systems. But, in true Roon fashion, it was the stuff that was percolating under those sets that was most fascinating.

The Beatles were/are masters of marketing and product. Over the years there’s been a staggering parade of Beatles releases, some official, some not - all of it well documented, meticulously indexed, and obsessively collected. Those factors make for a catalog that is perfectly irresistible to Roon customers and naturally suited for Roon’s music library superpowers. Much of The Beatles’ massive discography isn’t available on streaming sites. But because of how easy it is to import a personal music library, it was on full display in Roon and getting loads of play time: The Beatles in Mono, The E.P. Collection, The US Albums Box Set, Beatles Ballads, Love Songs, Anthology 2, Twist and Shout, The Lost Album, Reel Music, Hey Jude, Beatles Bop - Hamburg Days, Introducing… The Beatles - just to name a crate full.

Most people with digital music files will tell you that the bugbear of owning large collections has always been figuring out how to organize and use them in an intuitive and enjoyable way. Our customers have discovered that Roon solves the problem. Let me explain, for the non-Rooner, how this is done with just a few mouse clicks.

Scene opens: you’ve launched your Roon trial, installed the Roon software, synced your streaming services, detected and enabled all the audio devices that are connected to your local internet network, you’ve queued up some music to play and everything sounds great! But there’s your external hard drive with several terabytes of music on it. ‘Ugh’, you think, ‘I’ll mess with that later’. But, with Roon, there’s no need for dread. Especially not in your scenario, you’re importing an extensive collection of Beatles files and albums. This is heavily documented and easily recognized music. Roon utilizes data from several metadata providers and adds some secret magic that makes this process painless. When you link your collection in Roon, the metadata engine goes into high gear comparing your files against our data and in less time than you can imagine your music is in Roon, identified and ready to enjoy. And none of that processing alters a single bit or byte on your hard drive; Roon metadata is simply a nice set of clothes for your music files.

Roon does the same thing with all the other music on your drive. If an obscure vinyl rip or import compilation isn’t recognized, simply tell Roon to use your embedded artwork and file tags instead. It’s that easy. Your streaming favorites, digital music library, and live radio station presets are all integrated and ready to explore & enjoy in bit-perfect, high-resolution, lossless audio. That’s Roon through the fish-eye lens of a Beatle collection, but it functions the same way no matter what you listen to. If this sounds like something that would help you bring order to your digital collection and facilitate filling your listening space with your favorite music then we invite you to take a look at Roon. If you’d like to know more, simply get in touch with us. We’d love to help get you set up. Alternatively, you can try the free 14 day trial here.

What listening choices has the Let it Be Super Deluxe Set and Get Back inspired for you? Tell us about them here!

I am old enough to remember when the Beatles were in their hey day. I lived it.

I purchased the digital download as so to obtain a Hi-res version of the deluxe edition. In Roon it was definitely a new better mix of Let It Be. Thoroughly enjoyed it.

I also purchased the compilation disk set as so I would have the Atmos disk version of Let It Be.

That rendition was also outstanding on my surround sound setup.

You touch on some very good points about what Roon is and what it is capable of.

However, reflecting on what you said, I wish Roon could go a step further and implement ATMOS.

Thank you so much for sharing your experiences!

The more I listen to George’s solo on the album version of Let it Be the more I’m of the mind that it might be the finest guitar playing he ever committed to tape!

I wish Roon could go a step further and implement ATMOS.

Can I add Apple Spatial tracks to Roon? Roon Software

Either way the answer will be no. Decoding of any Dolby format would require a license. Roon must unpack at Core before sending to endpoint. It means the Dolby decoding would occur at Core and Core has no way to do this. Roon won’t pass a Dolby format untouched either (although this would be the preferred way to do it, see below). One other tricky part about the ATMOS format is it holds both the individual audio channels plus audio description metadata. This is what allows an ATMOS processor to…

Pretty much why I made this playlist…I lived and breathed Beatles. Watched the first Ed Sullivan appearance with my new girlfriend of 60 days. Been together ever since. 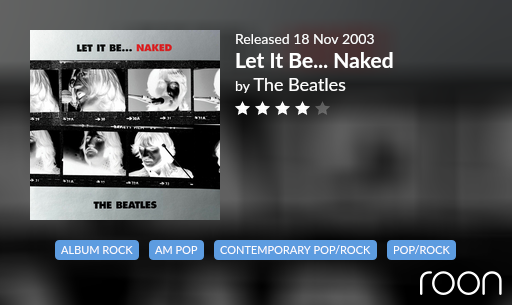 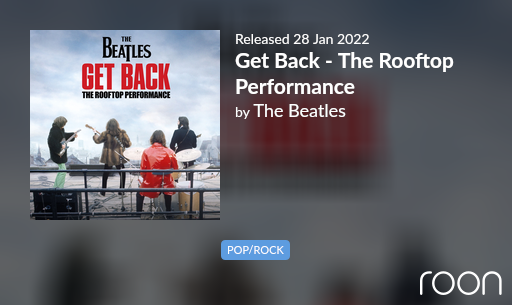 What a great image @Jim_F! I believe that’s you front and center of the band?

I see that you have the Rooftop Performance.

Where did you obtain this? 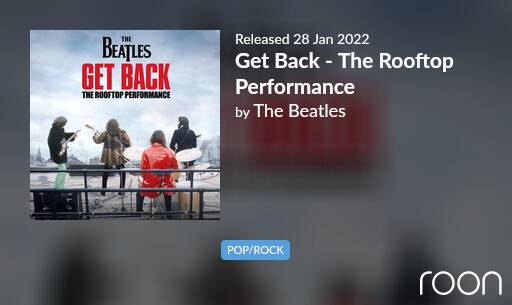 It’s linked at the top of this thread. Tidal has it in MQA.

It was released yesterday, I think, on both Tidal and Qobuz.

On the rooftop for the song Get Back, George was playing rhythm and John was playing lead.

After all of these years I always thought that was George playing that riff on Get Back.

All of these guys are very musical and can play each others part as shown in the documentary.

John on lead, rhythm, bass, piano, organ and other instruments to which I do not know their name. Paul on drums, guitar, mandolin, piano, organ, bass. Ringo on drums, bass, piano. And as for as George, well if it had strings he could play it.

When they were putting a song together, John and Paul would create the sections - words, chorus. George knew how to place together the different pieces of the song they were creating.

Also need to mention, they all could sing…

As a band, they really complimented each other very well. Their library is something to behold and is still holding it’s own today 50 years later.

That was a very different time than from today. But in that moment in time, it was special.

Roon “on-the-go” in our car. “Works a treat” as some of you would say. Using Sony noise cancelling headphones and Dragonfly Cobalt, Verizon 4G cellular hotspot on iPhone. Wife driving.

“Everybody had a wet dream.” 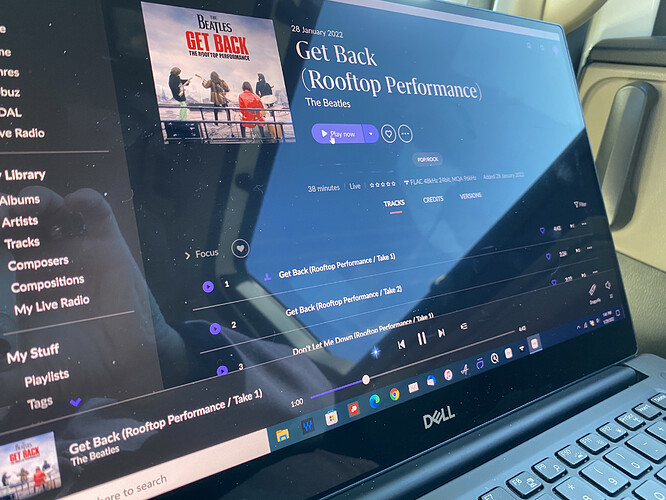 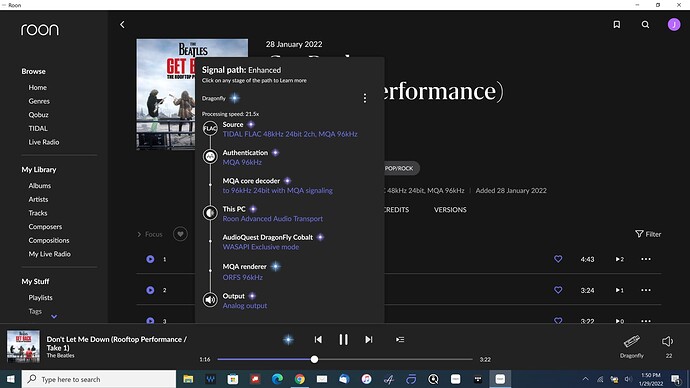 I still wish I could figure out how to add the mono box set to my library in a way that didn’t end in chaos and tears…… maybe somebody could post a template that would just appear and work.

I would just add a Tag, Beatles Mono, and that would give a direct link to the material.
I have done this for my Chris Rea, Blue Guitar Box set 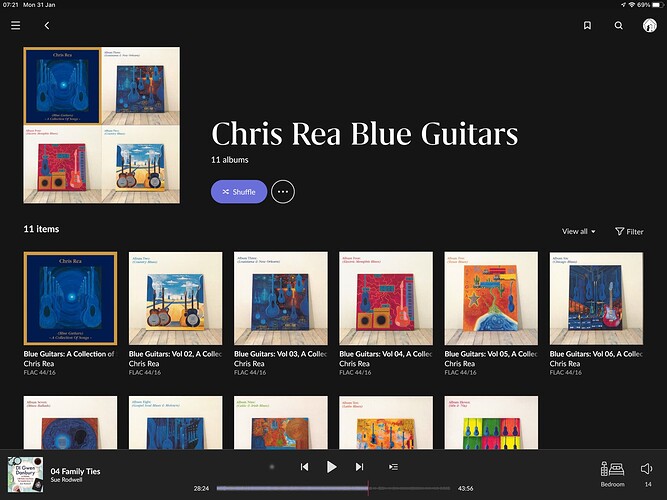 I’ve read many of the confusing attempts to work this out in the Roon community, and this is by far the clearest

Speaking of The Beatles, I wish I still had these. Actually, I never owned the meat clever album. 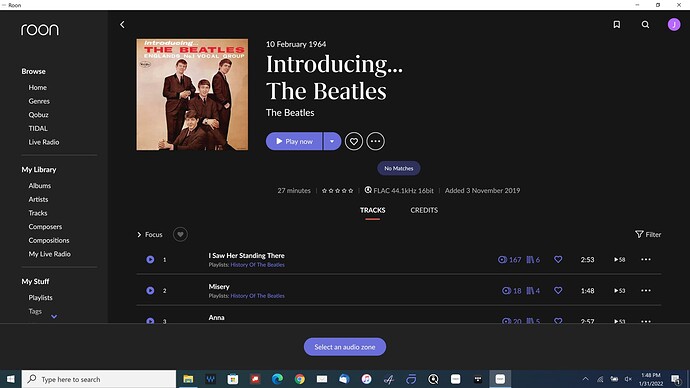 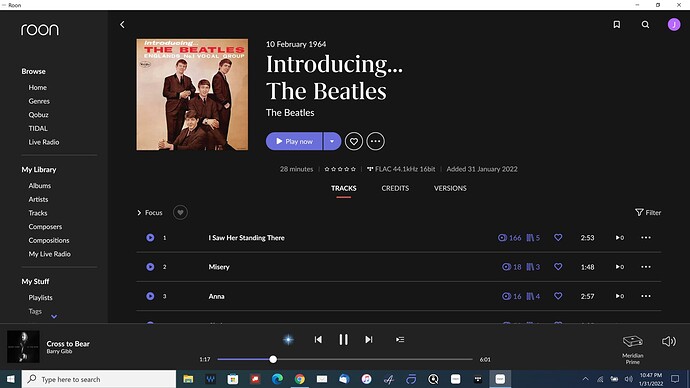 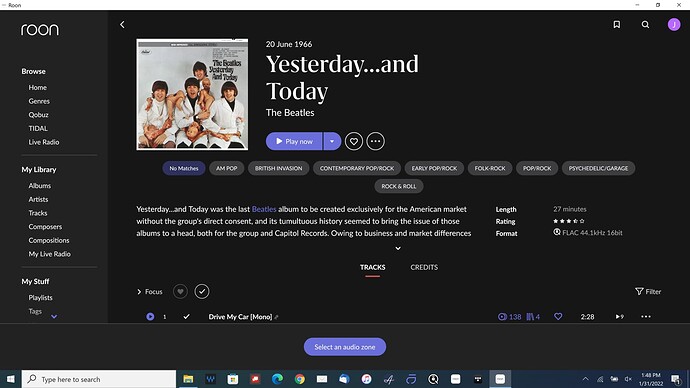 I’m a little surprised nobody has asked how I am streaming these from Qobuz and Tidal.

how are you streaming these from Qobuz and Tidal.

I made them in Roon by pulling the tracks from other Beatles albums. Got the album covers from Discogs.

Here’s the playlist for these two albums that you can’t find streaming:

Introducing The Beatles (same as Please Please Me minus two tracks) 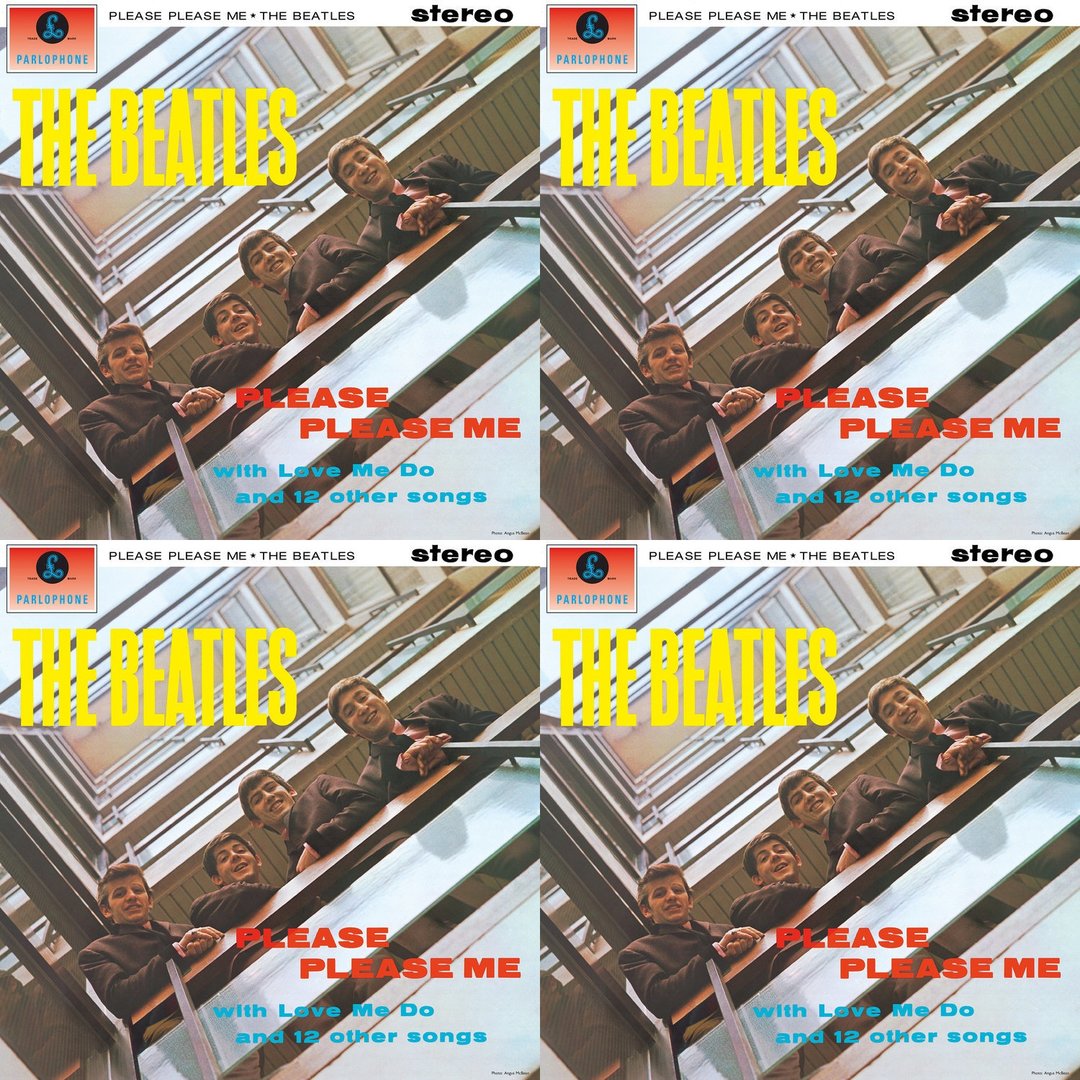 Listen to Introducing The Beatles on TIDAL

Yesterday and Today (taken from four other albums) 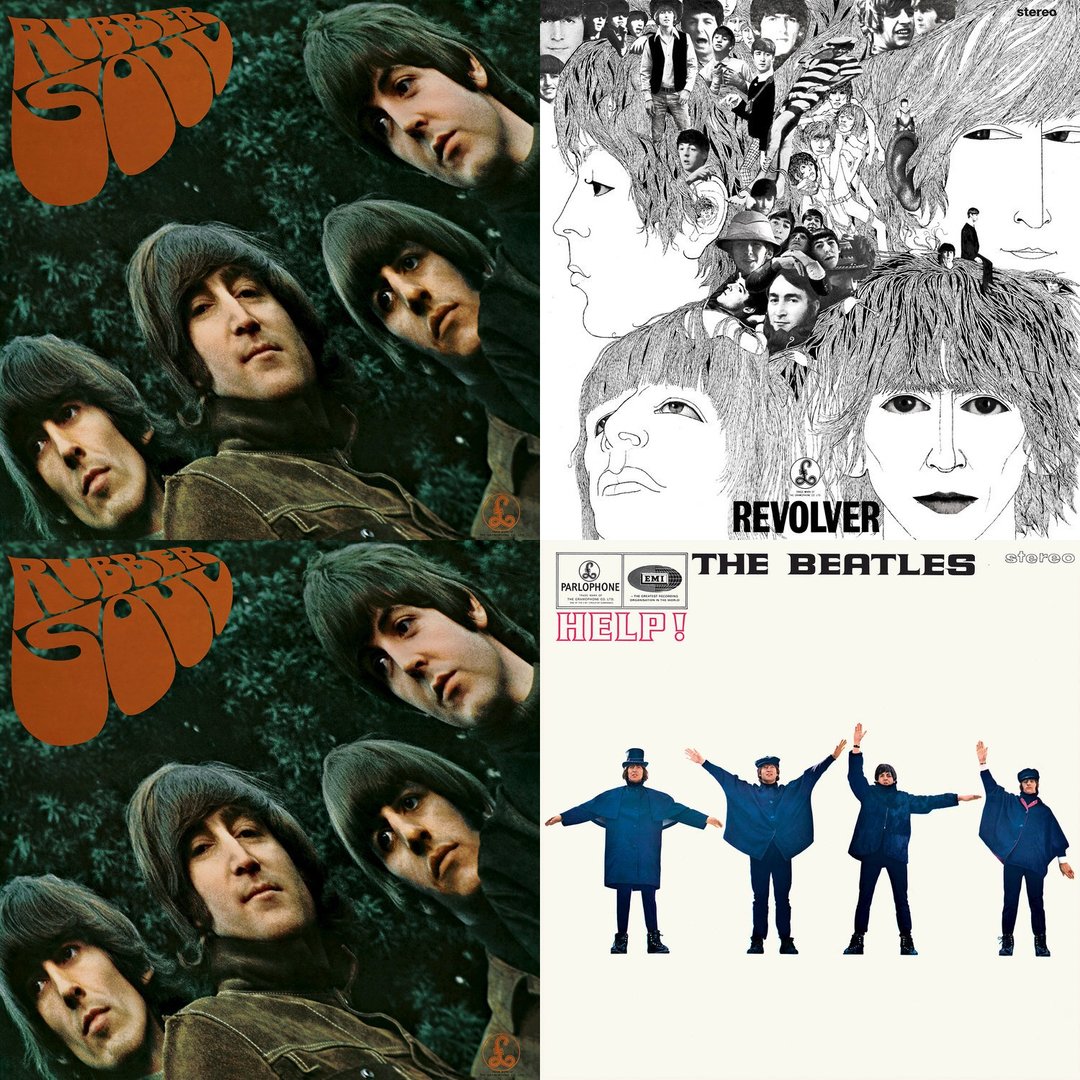 Listen to Yesterday and Today on TIDAL