I’ll be 87 next month, am now a widower living alone, so ROON and my interest in Audio & Video is an important part of my life. Starting as a pre-teen with an Edison player in the attic, this hobby has evolved into a rather nice set of components which can keep me busy and occupied during the day and entertain me with A/V at night.

My main music focus is on classics, all genre, but with a particular love of Chamber and Baroque & Early fare. But the classics can pose many frustrating problems for ROON with some items only partially or incorrectly recognized so considerable editing can be needed, even track by track. The software merchants complicate the scene by reissue of older material into new sets with the same boring cover for many albums so these require net searching to find the original albums with their colourful covers. At times this search fails so the challenge is to create a unique one using Microsoft Publisher. In this ROON evolves into a creative art pursuit.

Next Roon meets the organizational urge. I find the usual tags allocated to classical music too complex and confusing so have evolved a simpler one to suit my needs. This requires each new album to have these tags associated, something which was very tedious in the first days that the collection was assembled to hard drive, but is now routine for additions. I have used the “Album Title” mode of album display to help sort albums featuring the works of a single composer by editing, if needed, the title so the surname of that composer features first. This puts all the works of single albums of Bach, Beethoven etc together. The albums with many composers present have the leading header “Various” followed by the album title which the ROON search function can quickly find. Less successful is the search engine at finding works buried in these mixed albums but hopefully that will improve over time.

One of the big attractions of Roon is all the linked data, particularly to identified albums. However not all albums have associated commentary but more can be added. Net searches can reveal reviews on the album and info on the artists and composer which can be collated into a pdf file and added via Windows explorer. It will then display in ROON, all of which expands interests beyond music into creative literature.

Associated with all this is the fascination of the technology which yields high quality music reproduction. It has been fun to route the music around the house so that now I can listen to high quality music reproduction, controlled remotely by (irritating) iPads at any one of 4 headphone stations and other numerous speaker outlets. As I’ve posted before I actually have reached the end point and see no significant improvement is possible with different hardware, particularly with these old ears which now miss the high frequencies. This is good for the budget but a bit disappointing that the hunt for Audio Nirvana is over as experimenting with new audio toys is fun, even if it only yields moves sideways rather than forward. But of course ROON demands good PC hardware so there is always room for improvement there.

Finally ROON taps into the collecting urge which has resulted in a count of over 25,000 here. The uninitiated mutter about how extravagant and unnecessary a big music library is, particularly when listening to it all an impossibility. But is the same criticism levelled at those with large book libraries? Are the owners criticized for not reading them all? Yes, I’m guilty of owning multiple versions of the same work but each expresses a different artistic interpretation of what the composer created and as such are unique. One of the drawbacks of a home music collection can be a fixation on how a particular favoured artist plays a certain work so that the efforts of another artist, which are different, are not appreciated. Having more that one performance of a work broadens the music appreciation and avoids such fixation. That is my excuse anyway and I’ll stick to it!!

So there we have it, ROON meets the needs of the audiophile, the collector, the artistic and literary aspirations of the amateur and finally gives the emotive satisfaction that music can yield. What better and more engaging hobby is there? So it is now time to reset the program to Shuffle and guess what musical gem is playing. 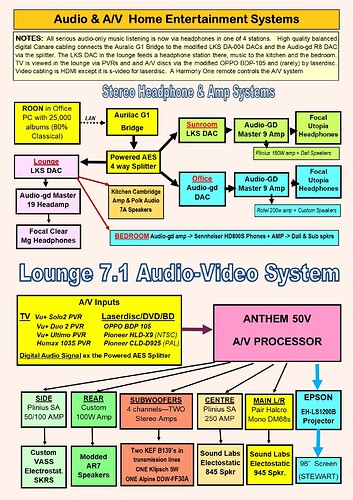 That must be one of the greatest posts ever. Thank you.

Thank you for your wonderful post! A beautiful summary of what Roon can offer.
You are an inspiration to this youngster of 75

Inspiring! Thanks for your sharing

That is incredibly inspiring – that you for sharing! I am so happy to hear that music (and video) remain such a fulfilling part of your life, as I gather they always have been.

I am intrigued that headphone listening seems to be quite important to you, despite having some great options for listening to your music through your amps and loudspeakers. I have also realized that I truly enjoy the headphone (or IEM) experience – especially when being sourced by Roon.

Thanks so much John. Your first paragraph teared me up a bit. I know music can’t replace your loss, but I do hope there’s moments that it soothes your soul.

A hugely enjoyable read. Thanks so much for sharing.

John, we’re fortunate to have you. Thank you for your post. It warmed my heart and immediately made me want to listen to my own collection… via Roon.

Wonderful post. Focal Utopias in all headphone stations. Nice! Splendid headphones for classical music. Couldn’t agree with you more re: multiple versions of the same work. At vernal equinox ± 1 day, I listen to 18 versions of Stravinsky’s Rite of Spring and find hearing the different interpretations/musicians/venue/sound engineering fascinating, gratifying and instructive. Have many versions of other performances for the same reason.

What a great post and impressive set up. Really inspirational for those of us still grinding it out at the coalface. To have such an extensive library and the time to properly enjoy it is amazing and I long for the days that I can immerse more effectively in mine. Also, wonderful to keep discovering new gems. I work in digital marketing and the way Roon curates the music is just sublime and the algorithm on the radio is spookily spot on. So much so, I wonder if it’s reading my mind! The community is really vibrant and I enjoy coming back here.

Damn, I’m 63 and can’t remember what I had for dinner last night, lol.

I have an Edison player in my basement media room. It was my grandfather’s. I have two dozen Edison Diamond records that I play occasionally. My main system that runs Roon is great, but the Edison is still a “miracle machine.”

I only just caught this thread. I am but a mere boy in comparison, but so many aspects of the use and curation of the OP’s library seemed alarmingly and also pleasingly familiar.
We are not alone!

John are you in England? Just guessing based on use of the word Lounge. Your setups are fantastic and so well thought out. I too have been in this hobby for a long time—I turn 70 next year—and music and video have always been very important to me too. I still have my collection of 100 laserdiscs plus a Pioneer LD player that still works but I confess streaming the movies is so much more convenient now. But I sometimes put on a LD just to see if it still plays. My favorite LD is my copy of The Life and Death of Col. Blimp which I just watched for the tenth time or so last month! I don’t worry about what will happen to all my LDs, DVDs, LPs, CDs, DVAs, and SACDs once I’m gone. I enjoy browsing through them and replaying them too much and somebody may well appreciate them in the future. What is old becomes new—I’ve lived through several cycles of this phenomenon already.

Not in the UK Sarah, but down under in lovely Tasmania, Australia, descended from a ships captain on my father’s side and a convict on my Mothers side (something she never accepted!!).
I’m embarrassed to report I rarely look at laser dusks these days and lazily record movies off free to air TV so I can skip the ads, Hard Drive recordings have made us VERY lazy when getting up and down out of the chair to change a disk once per hour is too challenging!!

One thing I like about Roon is the parametric equalisation (EQ)

My point in mentioning…

I use the parametric eq to boost frequencies that are diminished due to my age & occupational hearing loss.

its not news that its people that are older that can afford the expensive equipment set ups but I feel many hifi enthusiasts over the age of 60 might be missing a trick with compensatory eq.

I use eq to compensate for the high frequencies I have missing due to my age.

I respectfully suggest trying it.

Then you have the best chance of hearing the music the way the artist and producers & engineer were hearing at the time they mixed the material. 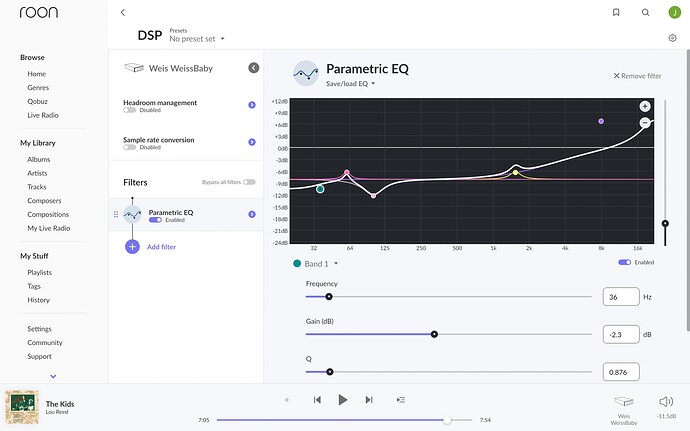 Just wondering, I have no hearing above 13 kHz. Will boosting frequencies from 13 kHz and above “restore” my ability to hear them?

Hearing loss frequency points (as far as I can tell from graphs) don’t drop off like a cliff.

They can be gradually sloped…

So nearby (lower) frequencies can be be diminished somewhat also

Therefore boosting so that you raise everything above 13k AND give some of the frequencies a bit lower a boost also - can give you the best (fighting?) chance at hearing high frequency information…

So we are taking about the upper registers of: cymbals, triangles, shakers, tambourines. the ‘rosin scrape’ of bowed instruments, the ‘spit’ on saxophones, snare rattle on snare drums… The upper information of guitar strumming, This upper register is sometimes referred to as ‘presence’ and can assist a ‘you are there’ effect on say, Jazz where it sounds like the trio is actually performing between your speakers in your living room, you are able to hear the fingers plucking the strings on the double bass…Or Norah Jones ‘feels’ near you, singing right into your ear…

To have any of that presence missing is a shame IMHO…

Imagine eq use in this case as restoring an oil painting that has been smoke damaged over the years - wouldn’t it be nice to see it expertly brightened up to look more as it did when painted?

Some of the fancy room correction softwares like Dirac give options for various target ‘curves’ Flat, ‘smile curve’ (the classic domestic hifi ‘cheer up’ frequencies - some low bass and some high top) but you can also set custom ‘target curves’ - these could be be set to compensate for hearing loss.

Finally - if 13k is lost and 10k is a bit dipped also - wouldn’t it be good to at least raise 10k? And what harm would it do lifting up all above 10k in a gradual upwards “smile” curve?

Nice to near this, because I will be 61 in a month, and still learning. Keep it up, love to hear more.